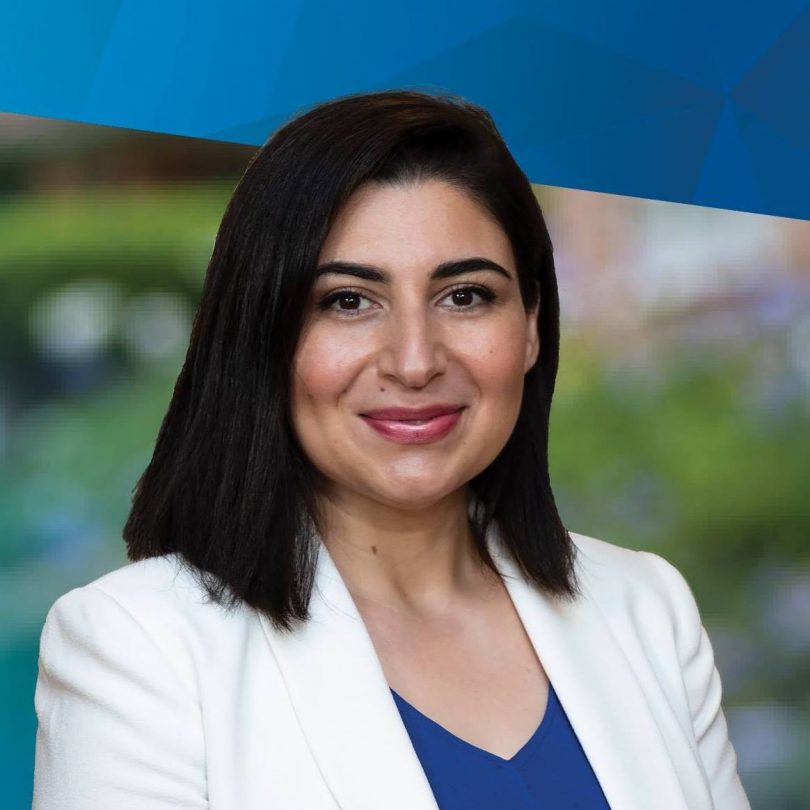 The Liberal Party from the Prime Minister down is standing by its candidate for Canberra, Mina Zaki, whose eligibility to stand is now under a dual citizenship cloud.

Ms Zaki was born in Afghanistan and moved to Australia when she was seven but only moved to renounce her Afghan citizenship when she decided to run for Parliament, winning preselection for the redistributed central ACT seat in December last year.

According to the Guardian, it appears her efforts to do so remain incomplete with final approval by the Afghan authorities still to be confirmed.

According to the checklist submitted to the Australian Electoral Commission, Ms Zaki says she renounced her Afghan Citizenship on 16 April but the supporting document dated 16 April is merely a letter to the Ministry of Justice recommending her application be accepted.

Nominations for the federal election closed on 23 April and Ms Zaki may still have been an Afghan citizen at that time.

Approval for renunciation must be given by the Afghani Council of Ministers and a confirmation letter is usually sent to the appropriate embassy through the Ministry of Foreign Affairs.

The Canberra Liberals said in a statement that Ms Zaki had managed to renounce her Afghan citizenship and obtained documentation but did not say what that was or produce any document.

“The Liberal Party is proud to endorse candidates from all over the world who have decided to make Australia home and participate in our democracy,” it said.

“Despite the difficult circumstances, Mina Zaki has indeed managed to renounce her Afghan citizenship and obtain, from the Government of that war-torn country, documentary confirmation that she has lost her Afghan nationality. She would be an outstanding representative for the people of Canberra.”

“I don’t have any concerns about that. That’s the advice that I’ve received,” Mr Morrison told reporters in Brisbane.

“It highlights – she’s a former Afghani. How good’s that? That’s who’s running for the Liberal Party. I think that demonstrates the diversity of the candidates that we’re putting to this election.”

This is the first election where all candidates are required by the AEC to complete an eligibility checklist declaring whether they have any issues, such as bankruptcy or dual citizenship, that could put them in breach of section 44 of the Constitution.

The doubts around Ms Zaki’s eligibility may well be academic because she is not expected to win the seat, in which Labor’s Alicia Payne is the firm favourite, although the Greens’ Tim Hollo hopes to mount a strong challenge.

But it comes as yet another distraction for the Coalition, which lost three candidates last week over their social media comments.

Labor said Ms Zaki’s eligibility to stand was a matter for the Liberal Party.

Mr Hollo, who has had his own laborious path to renouncing overseas citizenship, called for the reform of section 44.

“Mina and I don’t agree on many policies, but that’s the point – elections should be fought on policies, not on the candidates’ cultural backgrounds,” he said.
“Australia is a diverse society, and our Parliament should reflect that. Section 44 discourages so many Australians with international family connections from running for Parliament. I was only able to resolve my own citizenship issues by investing 14 months in tracing my family’s migration journey and multiple citizenship renunciations. Most prospective candidates aren’t in a position to do that.
“We need to reform Section 44 to remove this racist barrier from our democracy. In the meantime, the Australian Government should offer non-partisan support to people seeking to run for Parliament to navigate the citizenship procedures of other countries. It could take the form of a specialist unit within DFAT, available to advise prospective candidates.”
Tags Alicia Payne australian electoral commission election Mina Zaki Tim Hollo

Sheridan Martin - 4 hours ago
A beautiful building with a terrible past. I am sure a lot of people will be happy to see this gone. View
Edwina Bellwright - 4 hours ago
Greg, shame about the asbestos, could have made a great photo adventure. View
Jack Line - 4 hours ago
Mackenzie Saunders going to go before its torn down? View
Public Sector 8

Gabriel Spacca - 4 hours ago
It’s not so much the MPs. It’s the assorted advisers, consultants and other hanger-ons. They’re the ones that need to b... View
Fran Corby-Moore - 5 hours ago
Make them forgo the hundreds of dollars a day in travel and meal allowance and stay home... View
Alan Rose - 9 hours ago
They should all have been tested and fully vaccinated, and constantly tested while here. View
Property 5

Robert Honeybone Snr - 5 hours ago
That is not the Old Capitol Theatre they knocked down the Original too make way for the current theatre in Manuka View
Brad Gaynor - 7 hours ago
Ian E Wheeler Never should have been allowed to be knocked down. View
News 21

Jo Miles - 5 hours ago
I don't know much, but wouldn't it be crazy if there was free bulk waste pick up. Oh. Wait ... View
Jason Malcolm - 6 hours ago
I mean that's great and all...but they can't place cameras on roads where cars are frequently dumped and set alight, starting... View
Shawn McIntyre - 7 hours ago
Not good. Maybe a couple of tip vouchers for ratepayers, if you don’t use them you can give them away or flog them on marke... View
Breaking 10

HiddenDragon - 7 hours ago
"Last week, Ms Stephen-Smith said the ACT Government was currently vaccinating a large number of regional NSW residents, with... View
chewy14 - 9 hours ago
Sam Oak, Except Sydney is in lockdown so there should be minimal risk of exposure to those doing the right thing there. There... View
News 81

Roderick Saunders - 7 hours ago
I don't want to be cynical, but I wouldn't be surprised if the ACT Government comes up with some temporary car parking option... View
Nora Preston - 8 hours ago
It was unanimous that no one wanted light rail Stage 1. 3 Light rail links for more information showing no one ever wanted tr... View
Food & Wine 4

Jude May - 10 hours ago
Provided you don't need absolutely anything to do with reproductive health, because well, see that cross on the side of the b... View
show more show less
*Results are based on activity within last 7 days

The owner of the historic St John's Orphanage at 52 Mundy Street in Goulburn has been ordered to demolish the...
Opinion 219

No train without the pain. The north had its share; now it's the south's turn. That's what Canberra drivers and...

The building of light rail Stage 2A is about to make itself felt with two ACT Government car parks in...
News 70

@The_RiotACT @The_RiotACT
Readers were underwhelmed by Federal Government ads to promote the jab. This week we're asking, do you think Canberra could host part or all of the Olympics? https://t.co/wF5zkGDC0u (5 hours ago)

@The_RiotACT @The_RiotACT
Two Canberra women have launched She Shapes History tours, a series of walks that tell the real stories of the women who helped shape Australia https://t.co/L2QqiLv6XW (6 hours ago)