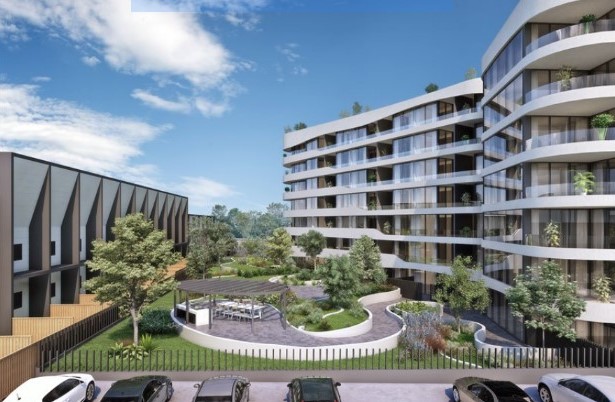 A render of the development from the Zapari Reconsideration, which ACTPLA rejected. Image: Supplied.

The ACT Planning Authority’s (ACTPLA) resolve to prevent another oversized development in the Molonglo Valley will be tested again with Zapari set to challenge the rejection of its 149-unit development proposal in Coombs.

Zapari is taking ACTPLA to the ACT Civil and Administrative Tribunal (ACAT) after a revised proposal was knocked back last month. But with Zapari lodging its application with ACAT on Christmas Eve, it is unclear how many interested parties are aware of the action and have had time over the holiday period to make a submission, which closed on Monday (6 January).

Weston Creek Community Council has only just applied to be a party to the action.

Zapari’s original proposal for the corner of John Gorton Drive and Terry Connolly Avenue in Coombs for an eight-storey, 212-apartment development was scaled back to seven storeys and 149 apartments, with floor area more than halved and setbacks and green space increased.

ACTPLA had knocked back the original proposal because of its size relative to the site, poor design, and overshadowing and privacy implications for neighbouring residences.

The maximum number of dwellings allowable on the site is only 44 and Zapari was again seeking to vary the site’s Crown lease to accommodate what would be a 239 per cent increase.

ACTPLA’s notice of decision rejecting the revised proposal said it was “significantly” over the permitted Estate Development Plan and the development “would have an adverse impact on the neighbourhood and landscape character of the area”.

Zapari is the second developer to take ACTPLA to ACAT over development proposals in Coombs, although POD Projects managed to cut a deal over its plans for the corner of Arthur Blakely Way and Colbung Street in Coombs, which had been rejected three times.

POD wanted to build a 107-unit development on a block that has a 40-dwelling limit.

The deal will see the proposal lose two storeys and 10 units, and add more car parking, landscaping and communal green space, but the outcome will still mean a 143 per cent increase on that.

ACTPLA said there was a “reasonable prospect” that the development would be approved if it went to the ACT Civil and Administrative Tribunal.

This approach angered many in the community who believed ACTPLA was not prepared to defend its decisions, which had been seen as drawing a line in the sand on inappropriate development.

Molonglo activist Ryan Hemsley said at the time that there was now a real danger that developers would see this capitulation as a green light for lodging equally inappropriate development applications in the future.

On his Save Molonglo website he asks of the latest action: “Will ACTPLA defend its decision to refuse this development (twice!), or will it roll over and let it through with some minor amendments, as it did with POD?

“If it pursues the latter option, what’s the point in having a planning authority in the first place?”

Land was sold with 44 units allowed. So 149 are sought. What a joke. There should be an absolute development prohibition on anything more than what was approved at point-of-sale. Developers are doing this everywhere.

The trouble is precedents have already been set for other developers who have gone over their quota.

Lee Sheather : Precedents are not forever!! A new precedent should be set where are planning laws are rigidly enforced for ALL new developments??

Surely there are already way too many units through Molonglo.

If this gets approved then maybe it’s ACAT that should be investigated for corruption or undue influence.

Wish we could build quality apartments with a floorplan that you could use with more than two people..like anywhere else in the world. Greed is king here. Even the penthouses are rubbish.

Apparently we have planning laws and a planning minister. Who knew?

Instead of putting in lots of new apartments how about getting the shopping centre in the Molonglo Valley up and running. Just my two cents.

that would take common sense. I guess weston creek shopping centre wouldn't be happy with that though so it appears there is no rush...Planning fail again.

How many people can you shoehorn into one valley!?

Brett Clark : They might ban obese people to maximise the number that can shoehorn in??? 😂😂😂

We don’t need any more ghetto-style “apartments” that will be slums in ten years.

Cant see how they can argue and win when they knew what the limitations were when they are buying the land. The pod development compromise already showed that if you push them hard enough they will budge. Simple negotiation, shoot for the sky, settle on the actual figure you want.

who knew we had a Labor government with Greens having balance of power?

You’d think so—but baby developers are doing it: they buy land for a price allowing x units and then submit plans for many more units. I’ve noticed they seem to put in an outlandish proposal and then scale it back to something that the govt agrees to, but us much more for which the land was sold.

Good on you for implementing the ACT building regulations and stand up to corporate greedy...

Eeek! not an attractive option

Come on , it’s only an additional 105 units over the allowable 44. It’s not like they knew this when the purchased the site.

Marc Edwards, I think you win Facebook for the best use of sarcasm today!

Future slums the whole lot are ugly as.

Susana Di Donna - 32 minutes ago
Monica they are doing this. View
Monica Muschialli - 2 hours ago
John Boland agree John in Victoria they have hard rubbish kerbside pick up about time ACT introduce this service View
Property 4

Josh Fear - 1 hour ago
When was the last time a real estate agent was realistic about the state of the market...? View
News 32

Ben Appleton - 2 hours ago
Shayne Borger simple. Don’t do the wrong thing 🤷🏻‍♂️ View
John Dillon - 5 hours ago
That's what I mean, then our CM will come out with the standard "we will let market forces decide ". Not for rates and taxes,... View
Chrissto Melba - 5 hours ago
The High Court of Australia today decided that (according to them) juries are too stupid to understand what is put in front o... View
News 24

Bill Gemmell - 2 hours ago
It is a nice idea which I fully support. However, it is called a tax-transfer system for a reason. The tax system funds the $... View
Alan Carlyle - 6 hours ago
This is seriously worth considering for the simple reason that the Australia (and the World) is becoming a far more dynamic a... View
News 31

Paul Leins - 2 hours ago
Folks are more than welcome to upgrade if they so choose, but the simple fact of the matter is that a chromebook is excellent... View
Karen Feng - 6 hours ago
Elliot Maroney-O'Brien You're making the assumption I do all my work on 12.3" screen. I dont recommend doing all your work lo... View
Elliot Maroney-O'Brien - 7 hours ago
Karen Feng Too small as a laptop really. 12 (or 12.3 inch if you really want to be pedantic) is too small to work decently wi... View
Property 66

Alex Makedonsky - 3 hours ago
These are very divisive comments.. he's not a leader. A true leader (think Churchill) could have choosen other words to unite... View
News 1

Rick Durden - 5 hours ago
I'm starting to like this fella. View
Opinion 18

Mark Walton - 5 hours ago
No problems having free press or the idea that hard questions cannot be asked. But surely the most important question, is who... View
Daniel Duncan - 6 hours ago
I will stand up for a free press. Will they stand by us with our free speech... so far nope. View
Community 6

@The_RiotACT @The_RiotACT
A little more than half of you thought the West Basin land swap, quietly engineered by the government and NCA, was not a good idea. But how do you feel about deferring or reducing rent during the COVID-19 crisis? https://t.co/FDjJS5UeLe (2 hours ago)

@The_RiotACT @The_RiotACT
At a time when Canberra's social services are providing critical support, many on the frontline are absorbing significant spikes in demand https://t.co/I8YIV7wufa (4 hours ago)