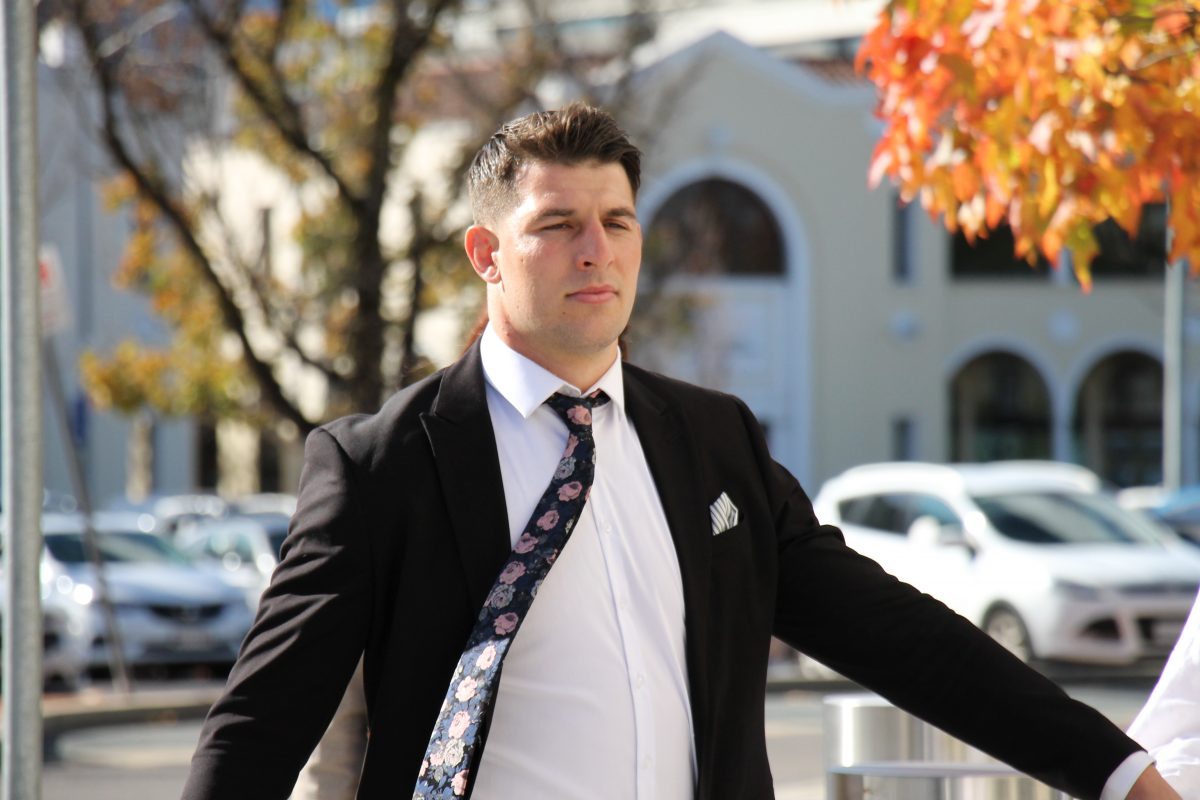 Curtis Scott, 24, approaches court on Monday where he was ultimately cleared of an assault charge. Photo: Albert McKnight.

Former Canberra Raider Curtis Scott has been acquitted of assaulting a patron in a Civic nightclub after the man allegedly asked if he would like to have a “gay experience”.

The 24-year-old successfully argued he acted in self-defence when he had his assault charge dismissed in the ACT Magistrates Court on Monday (16 May), a charge that had already resulted in him being terminated from the rugby league team.

Closed-circuit television footage of the 30 May 2021 incident screened to the court showed the complainant touching the back of his shirt inside nightclub Kokomo’s before they exchanged words and Mr Scott eventually punched him in the face.

Mr Scott told the court he had originally been out on the town with his teammates after a game, not drinking much because he had training the next day, and ended up alone in Kokomo’s.

He said he was speaking to a football fan when the complainant came up behind him, pulled up the back of his shirt and said, “nice tattoos, I’d like to f-k you”.

“That made me really uncomfortable,” Mr Scott said.

He said he turned around and asked what the complainant had said, saying the man replied that he wanted to have “a gay experience with me”.

The football fan, who Mr Scott realised was friends with the complainant, told him not to worry and that the complainant was drunk, but grabbed his wrists, which made Mr Scott feel like he was being restrained.

He broke the grip, felt “outnumbered”, and punched the complainant in the face when he walked towards him.

“I threw a punch in self-defence to protect myself,” he said.

Mr Scott said he had been diagnosed with post-traumatic stress disorder over an incident on Australia Day 2020 when police put him in handcuffs while he was asleep. He was then beaten and tasered. He was charged over this incident, but all charges were dismissed.

In cross-examination, he was asked if he became irritated and angry because the complainant made a perceived sexual advance.

“I wasn’t mad. I was extremely worried and scared at the time,” he said.

Magistrate James Lawton said Mr Scott was “frank and forthright” in court, although he may have been a “smart alec”.

He said he had to look at what Mr Scott perceived at the time and also noted the physical aspect of the incident was initiated by the complainant.

Magistrate Lawton said the prosecution had failed to negate the argument of self-defence, found the offence not proven and dismissed the charge, which was met with a hissed “yes” by one of Mr Scott’s supporters in the court’s gallery.

Mr Scott now lives in Sydney where he works as a courier.

Outside the courthouse, his lawyer, Sam Macedone of Macedone Legal, said his client was happy he had been vindicated over the assault charge but still suffered “quite a lot” from what happened on Australia Day 2020. That incident had had a “terrible effect on him”.

“He’s a long way from coming out of this, but he’s doing his best, and he’s doing well,” he said.

Mr Scott would “love” to get back into rugby league, he said, but had to deal with historical allegations in NSW first.

Curtis Scott stood down after alleged fight at Kokomo's