The Creation of Peach Lane 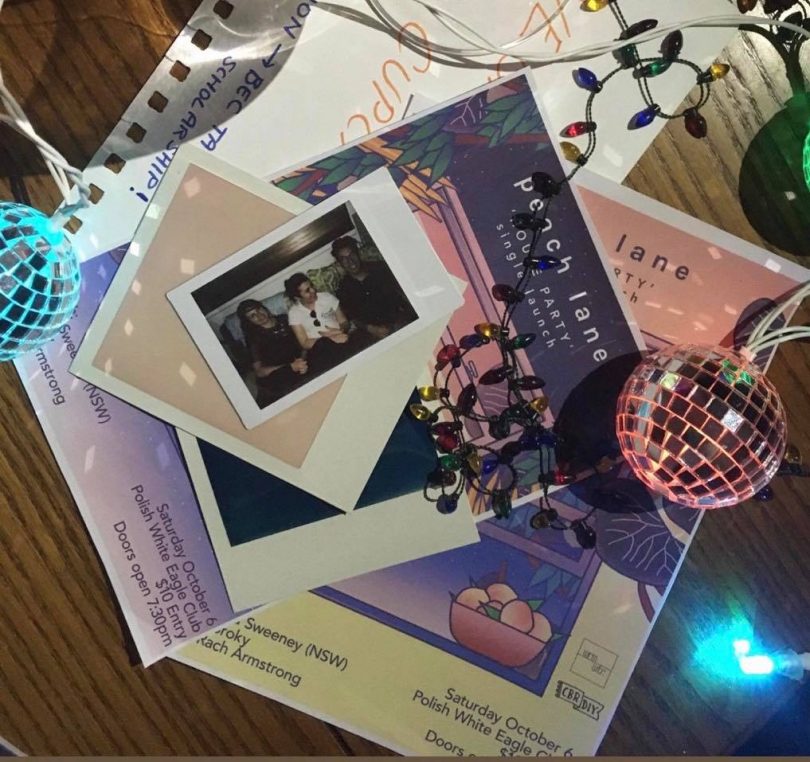 “Canberra is a good spot to start something”

Just over a year ago, Triple J teamed up with Lorde to give budding musicians the opportunity to remix her track, ‘Homemade Dynamite’. Pierre Dao (production, guitar, keys, vocals) entered the competition, creating the tune that would eventually become ‘House Party’.

When Pierre and Madeleine Parker (vocals, guitar, keys) decided to start a band, they thought it’d be pretty funny to call themselves ‘Lane One Form’. They were right – but it was at one of their first listening parties that a friend simply suggested ‘Peach’ (Dao, in Vietnamese).

And thus, Peach Lane was born.

Hannah Feldman (bass player and harmony queen) met Madeleine earlier this year at university, and the newfound trio have been unstoppable since.

Peach Lane’s upcoming single ‘House Party’ is described as a “good chill house party complete with a bathroom scene”. Released through the brilliant ‘warm water.’ records, it encompasses the band’s ‘happy/sad’ vibes, and sounds like something you would listen to on a beach holiday (except you’re too chilled out to play volleyball or go swimming).

By the time each band member had put their own spin on ‘House Party’, it was so far removed from Homemade Dynamite, it had become something entirely unique. Most importantly, it perfectly represented Peach Lane’s new identity as a trio.

After their single launch, Peach Lane will be spending their time translating their new tunes into live performances, evolving their sound, and learning everything they can about music and production in the process.

“The moment it gets easy, we’re not working hard enough. We have so much to learn and are stoked to be living in such a supportive and creative city”

chewy14 - 33 minutes ago
Kenbehrens, I definitely see a role for the seizing of cars and prison time for repeat offenders as well.... View
phydeaux - 2 hours ago
"Penalising “poorer” [sic] people less, is an incentive for them, and a serious grievance to others" So sorry to hear tha... View
kenbehrens - 2 hours ago
Difficult question. I've often thought that fines are inequitable with those on higher incomes not adversely impacted. Yet th... View
News 5

chewy14 - 36 minutes ago
BJ, Whilst I think politics definitely influenced early parts of the project, Tuggeranong has since seen the construction of... View
bj_ACT - 2 hours ago
Tuggeranong’s water quality has not been getting better. I didn’t know you were such an easy marker on the score of ACT g... View
chewy14 - 3 hours ago
BJ, The problem is that short of getting rid of the Lake entirely, there is no easy (or cheap) solution. Most of the problems... View
News 319

bj_ACT - 50 minutes ago
That’s a really interesting read A nony mous. We deserve to know more research and analysis. Many of the Oaks and Cedars of... View
A Nonny Mouse - 4 hours ago
The Local Government Association of South Australia commissioned an 'Independent Inquiry into Management of Trees on Public L... View
bj_ACT - 6 hours ago
I’d certainly like to see some peer reviewed stats on the tree falls in Canberra. I noticed on radio last week the TCCS exe... View
News 1