Local volunteer groups such as Landcare are set to benefit from a pool of $3.5 million in funding over four years. Photo: Supplied.

Some volunteer environmental groups, including Landcare, have secured $3.5 million in funding to be delivered over four years.

The funding will be distributed across various groups, all of who volunteer in different capacities to maintain, improve and care for the ACT’s natural environment.

More than $360,000 will also go to the Ginninderra Catchment Group’s citizen science program, Frogwatch, which has been engaging volunteers since 2002 to monitor, raise awareness, restore and protect local frog habitat.

ACT Wildlife, a volunteer-based organisation that rescues, rehabilitates and releases native animals in our region, will also receive more than $427,000.

The funding will also allow for an additional ParkCare ranger in Canberra’s north, who will provide conservation volunteers with support and will work closely with the ACT Parks and Conservation Service on volunteer-led initiatives.

According to local Landcare volunteers, the funding announcement helps to alleviate some concerns regarding planning for future activities.

Landcare ACT project officer Jarrod Ruch explained that with so many catchment groups and other groups relying on Landcare ACT to play a coordination role, “it’s great to be able to have that certainty of funding”.

Previously, he said Landcare ACT’s funding had sometimes been “precarious”.

“It is pretty important to have this certainty now,” said Jarrod.

The funding will allow for increased activity around bushfire recovery work, including erosion control and community consultation and engagement.

There’s also a study taking place through the ANU to research the genetics of eucalypts and how recovery of different species will occur post-bushfires.

For now, a lot of the work is on hold due to COVID-19 lockdown.

“Landcare is all about community connection to the land so when community can’t gather, it’s a bit difficult to do a lot of our work,” says Jarrod.

It was an ACT Greens election commitment to secure long-term reliable funding for these groups.

ACT Minister for the Environment Rebecca Vassarotti said she is delighted to have secured the funding in the upcoming ACT Budget.

“The Canberra community plays a critical role in caring for the ACT’s environment, in particular organisations such as the three ACT [Landcare] catchment groups and ACT Wildlife,” she said.

“Each of these groups has been providing localised and dedicated care for the environment for decades.”

“As the Minister for the Environment, I want to ensure long-term financial support for those volunteer organisations and volunteers who truly love and understand their neighbourhoods. 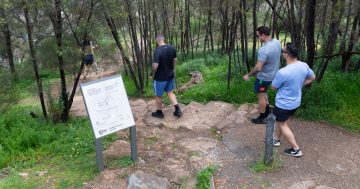