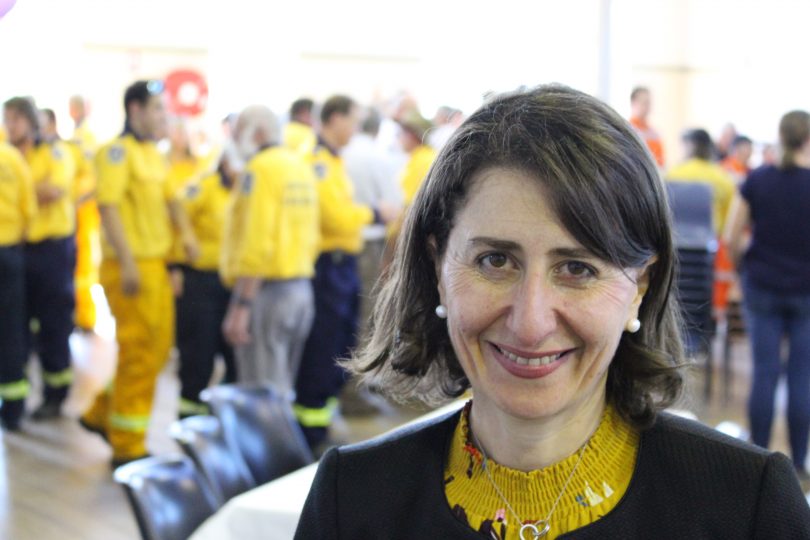 Premier Gladys Berejiklian has made a sweep of the Bega Valley and Eurobodalla making significant cash deposits along the way.

It feels like a long time since a NSW Premier of any political persuasion ventured into the Bega Electorate for such a visit; yesterday’s (March 26) won’t be forgotten for a while.

The day started with $10 million for Tathra as the community rebuilds strongly in the wake of the March 18 bushfires.

“I am relieved that nobody lost their life, however with such devastating property loss and damage we need to help people rebuild and the community recover,” Ms Berejiklian says.

The $10 million will be spent on the clean-up ahead, removing what is left of the 65 houses destroyed.

The State money means the cost of cleaning up properties will not be deducted from funds available under residents’ insurance policies for rebuilding.

“The quicker the clean-up is completed, the faster the community can heal, and people can get on with rebuilding,” Member for Bega and NSW Transport Minister, Andrew Constance says.

The Premier and Mr Contstance also announced $1.2 million for the long talked about coastal walk linking the 150 year old Tathra Wharf with the headland above, $100,000 for a Tathra tourism promotion, and $40,000 for a kitchen upgrade at the Bega Showground which acted as one of the region’s evacuation centres during times of emergency.

NSW Premier in Tathra with $$$Zip through to 11:40 for the best sound and vision.Ian

Next stop was Dignams Creek south of Narooma, the crossover point between the Bega Valley to Eurobodalla Shires.

“Work on the [two] new bridges started in the second half of last year and the [bridge over] Dignams Creek is already about 60 percent complete,” Ms Berejiklian says.

The entire upgrade is on track to be complete in mid-2019, weather permitting.

Forty-five minutes up the road at Moruya, more money – $500,000 for an artificial reef off the Eurobodalla coastline.

“I can’t wait to see both locals and visitors embracing this new attraction and hitting the water for some fantastic fishing, and the opportunity to snag larger trophy species including Snapper and Yellowtail Kingfish,” Mr Constance says.

In Batemans Bay an hour later, the day’s biggest announcement – $26 million for the town’s new indoor aquatic and cultural centre.

Eurobodalla Shire Council has been pushing the idea as a replacement for the ageing Batemans Bay outdoor 50-metre pool.

The cultural facility, on the same site, will include a purpose-built exhibition and performance centre, as well as workshop and storage space that will serve the region’s 18 art, dance and theatre groups. 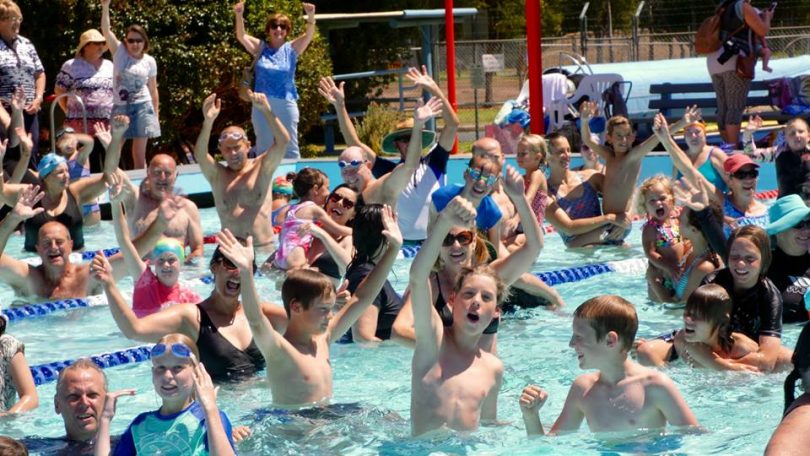 Around 120 people turned out for the Pack the Pool event in Batemans Bay in November 2017 arguing for a 50m pool to be retained. Photo: Fight for Batemans Bay 50m Pool Facebook.

“It will be state-of-the-art, and will provide a place where community members can come together, be active, and take part in activities that enrich their lives,” the Premier says.

“The many arts and theatre groups in the region will now have a new and impressive home for the 800 events they host between them every year, including regional arts festivals and prizes.”

Some in the community have lobbied hard for the existing 50-metre pool to be incorporated into the new centre rather than the 25-metre option presented in Council’s concept plan.

Mr Constance seems to have put that debate to rest, “The existing pool was built in 1966, so it’s high-time Batemans Bay got an aquatic centre that’s modern and meets the needs of the community,” he says.

“Extensive community consultation has shown there is incredible public support for this project, so it’s pleasing, as the local member, to deliver it.”

Commenting on Facebook, 50-metre pool campaigner Maureen Searson writes, “Very disappointing for the community and very shortsighted…downsizing the 50m pool in a fast growing area. Yes it is the COUNCIL’s plan NOT the communities.”

By 6 pm, $37.8 million had been announced for the Far South Coast. This community was in need and that is reflected in yesterday’s spending, but with still 12 months to go until the NSW election it’s hard not to think what might be next for the Bega Valley and Eurobodalla.

Clare Hyden - 48 minutes ago
Mark Rogers ummm 20,000 through the gate each day. View
James Kelly - 7 hours ago
Health minister impressed… bro I got covid there View
Mark Rogers - 7 hours ago
The event organisers clearly stated it was not limited to 20,000 a day. It was 80,000 overall. So some percentage of that was... View
Opinion 375

Missing the coast? Here’s how it’s changed since you last visited