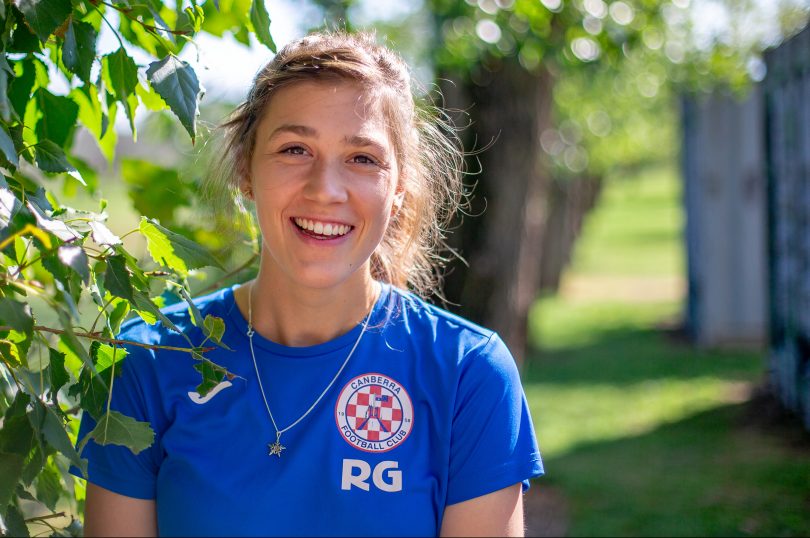 Rachael Goldstein has scored 10 of her side’s 14 goals this season. Photo: George Tsotsos.

It was on the sideline that the fire started to burn within the belly of Canberra FC forward Rachael Goldstein.

It was the 16 September 2018, the biggest day on the WNPL calendar. Canberra FC was locked in a tough match against arch-rivals Belconnen United in the grand final and Goldstein was parked on the bench after tearing her hamstring in the dying stages of the first half.

That heartbreaking moment inspired the young forward to return to the game fitter and stronger and come out all guns blazing in 2019.

“After last season’s grand final, I knew we had to start the season strong,” Goldstein said. “Other seasons we have lost a couple of games and got off to a slow start.

“We wanted to get off strong and act like the team that people should watch out for.”

That is exactly what the 23-year-old and her side have done, having claimed seven points of a possible nine and sitting atop the 2019 WNPL ladder. Canberra FC started with a 0-0 draw in the first game against the Blue Devils followed by consecutive 7-0 thrashings of Woden Weston and Canberra Olympic.

The roaming forward has had a strong impact on her side, scoring 10 of her side’s 14 goals this season, not that she is taking much credit for it.

“I just want to turn up and play the best I can,” she said. “My job as a forward is to score goals so I go out there to do my job. I think I scored five goals way back in the day, but six is my new benchmark.

“As long as the team plays well and we do some good plays, I am happy. I like winning, so as long as we are winning I am happy,” she said, laughing.

Belconnen United have had a stranglehold on the women’s premier league for almost a decade after the side sealed their eighth consecutive minor premiership last season. Over the last three seasons, the Blue Devils have lost a total of three games but Goldstein is adamant that is about to change.

“Oh we are beating them this year,” she said with a smile. “We have got to be confident but we can’t underestimate them because they are a strong side.”