About last night and Amanda Palmer 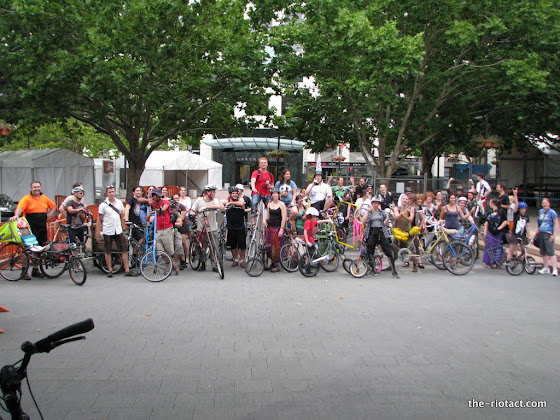 For those of you who weren’t there, in the midst of the sturm and the drang, the rain coming down in sheets while Amanda Palmer jammed with Mr Fibby, it’s something you should regret the rest of your life.

It all started with a simple enough idea. “I wonder if Amanda Palmer would like to go riding with Rat Patrol?” I mused to myself a few weeks ago.

It was late at night, someone had just facebook invited me to the paying show, and well, I thought she probably would.

I’ll never forget up at Corinbank a couple of years ago listening to Darren Hanlon asking if anyone had seen the movie on TV the night before which he’d watched in his hotel room.

“Of course not you fool, we were here having fun, why on earth were you watching crap TV in a hotel room?” was the thought which went through my mind, and most other people there.

There’s a very long and involved story about how my invitation ended up with Ms Palmer.

But the answer came back “Yes, Amanda Palmer would like to go on a ride with Rat Patrol.”

At that point I turned the idea over to other rats and last night’s insanity was born.

Knowing that Ms Palmer likes to play what in Canberra we call guerilla gigs (but she calls ninja gigs) we set about finding a piano she could play on (and in the process I now know a lot more about moving pianos than I ever wanted to).

A plan was hatched to ride out from my house, meet fans in Garema Place, and ride to the Carillon.

But things got a bit confused and to some dismay on my part my home address, with a map, was tweeted to half a million people.

500,000 people invited to party at my house. I’m really too old to be the next Corey Worthington.

Yesterday afternoon was a flurry of piano moving, bicycle maintenance and movements, and this being rat patrol, beer.

At one point an older woman pulled up in her car with her daughter to ask if it was the right house. She wasn’t coming on the ride, just to know she’d identified the house a famous person would be at in a few hours time.

Half an hour early the first Palmer fans started to arrive.

And soon my front yard was full of people and bicycles. 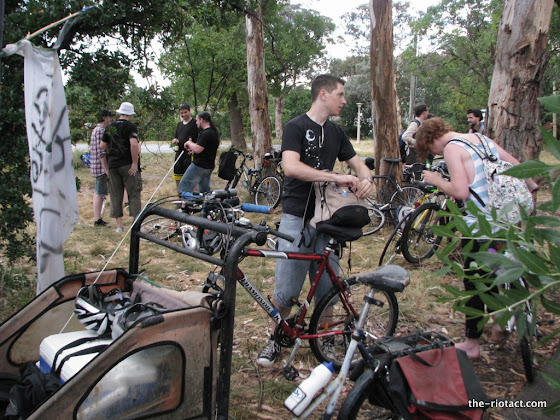 At a quarter past six Amanda Palmer was in my yard and being introduced to Mr Fibby (no need to thank me Fibbyites, a pint in the Phoenix will suffice).

The rain was in many ways a relief, scaring off the fair weather fans, and by ride time the lull before the big storm had arrived.

At 6.30 we were off and rolling smoothly. Remarkably smoothly now that I think about it. 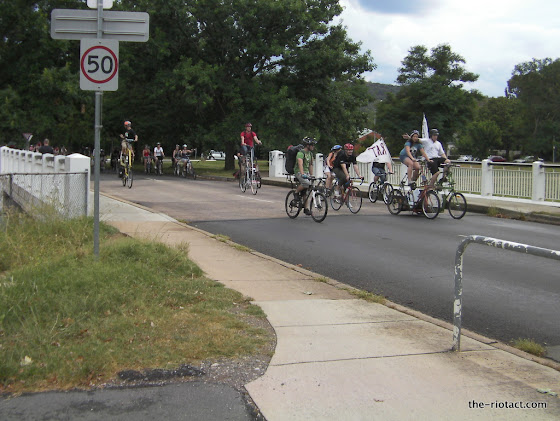 Garema Place and the group photo above were fun and then to the Carillon where a fair crowd had gathered. 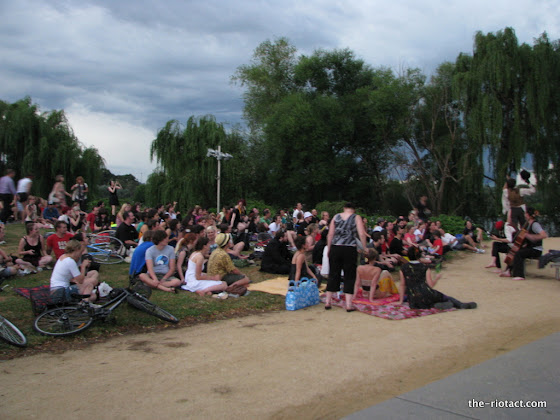 Mr Fibby did their thing, and then the bells started up as Ms Palmer gave us a Carillon recital.

And then, with a piano parked out of cover, I looked at the weather radar on my phone and realised all hell was moments away from breaking out.

Strong men with stout backs were quickly mustered and we got the piano under the bell tower just as what seemed a lot like the end of the world got started.

150 people crowded into limited shelter with amazing performers? Let me tell you it’s a lot of fun.

The video gives a bit of a feel for it, but only a bit.

It really was up there with Nirvana playing ANU. In years to come a lot more people will reckon they were there on the night than can actually fit under there.

And then we ran out of beer. So it was time to get moving. Some craziness might have occured at a still secret rat location. 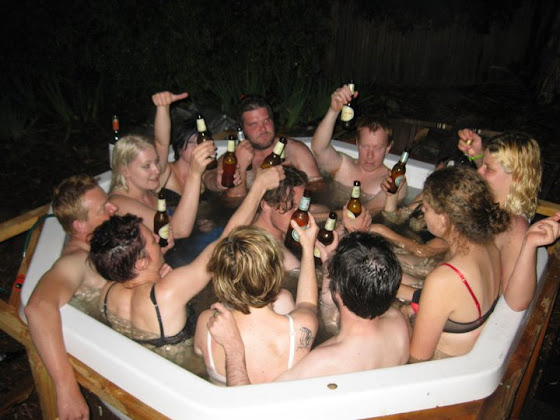 But she seems to have enjoyed her Canberra stay if this Twitter post is anything to go by:

No need to thank me ACT Tourism.

Many thanks to everyone who came, I think you all had a good time.

And to those who missed it? Well. Better luck next time.

A gallery of video and images is available.

Send me more if you’ve got it to images@the-riotact.com .

ummm… who is Amanda Palmer ?

Only the most awesome songwriter/performer in years!!!!

How did I not know Tool were in Australia! Double dose of regret for me…

At least the gig slayed balls.

I couldn’t let this go without celebrating a mention of SLAY F***KING BELLZ. In the past few weeks I’ve caught them, Tool twice and now Amanda Palmer at the Big Xylophone. Best live music month ever.

Also, the Amanda Palmer gig made me moist, and so did the rain.

It seems I had a small and inadvertent part in this event. My blog describes how I got one lovely lady in a green gauze frock to the Carillon just in time to get drenched!

I’ve been into Amanda Palmer for the past couple of years and enjoyed every last drop of the NGA gig on Monday. Sadly, I couldn’t make the ninja gig at Aspen. Glad you all had a good time. It looked like a blast.

ummm… who is Amanda Palmer ?

It was a fantastic night. Looking forward to seeing her play here again in 2013, or sooner.

looked just amazing, incredible to see all the crazy peeps I know so well jamming with Ms Palmer. Wishes would’ve wished me there. Glad I was at a transcendental Tool concert in Melbourne to relieve some of the pain of not being able to attend.

it’s something you should regret the rest of your life.

That was a confirmation I was hoping to avoid.

At least the gig slayed balls.

kenbehrens - 8 hours ago
Pretty weird to assign tariffs around whether the house faces north, its size and whether the person is on welfare or not. Th... View
chewy14 - 10 hours ago
Retro, One of us in denial, that's for sure but it isn't me. You still think fossil fuels can compete with cheaper renewable... View
Capital Retro - 11 hours ago
You are still in denial that renewables are where they are solely because of massive subsidies. At the rate coal fired power... View
Community 5