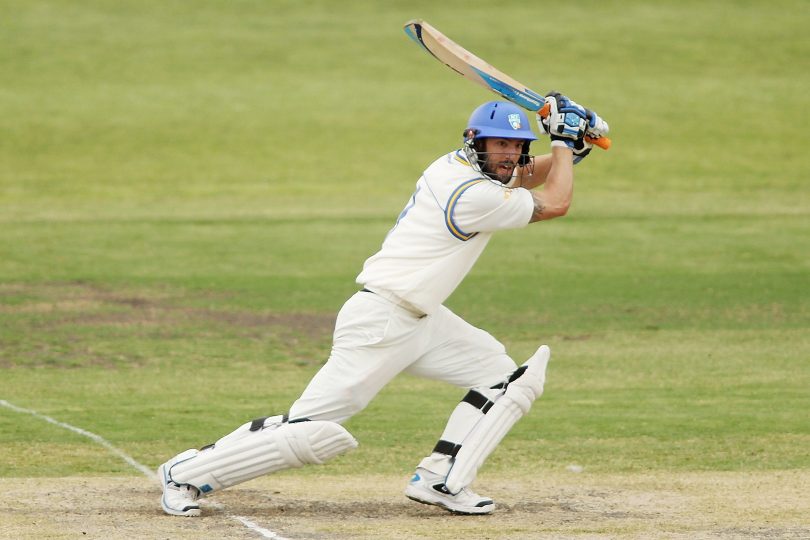 Jono Dean is joining the Cricket All Stars for Mental Health Day match on Sunday, 17 November at Phillip Oval in Canberra. Photo: Supplied.

Watching Jono Dean blaze through a West Indies attack, hitting 51 off 38 balls for the Prime Minister’s XI in 2013, then four days later, smashing 300 in a single day in ACT Cricket, it is hard to even contemplate that he would have issues with anxiety.

But the reality was that he had overcome mental health issues earlier in his career, only to see them resurface a number of years later when he retired from elite cricket after the Adelaide Strikers Big Bash triumph.

As he describes it, there were times in recent years since his retirement that he battled to fill the void left by the highs delivered through his playing career.

As many elite athletes have experienced, the transition from sport to a ‘normal life’ can be tougher than elite competition.

“It is about finding that purpose again. I thought I had lost it for a period of time.”

Jono says having experienced mental health issues when he was young, and playing cricket in Sydney, helped enormously: “I’m fortunate to have experienced it before, so I identified the signs and knew how to deal with it.”

The first thing he did was talk about it.

“For me, the first conversation was with my wife Kim, who has been great in helping me. I then spoke to my public service workplace, the Department of Agriculture. They organised for me to see a psychologist and this all helped me through.”

Jono concedes the hardest part initially was to start the conversation, but he says he is now comfortable in talking, being open and going public.

“If you had spoken to me six months ago, it would have been a difficult conversation. It’s hard being vulnerable,” admits Jono, “But I have realised that it’s okay. It’s a sign of strength to be open about your feelings.”

On this point, Jono says he is full of admiration for fellow ACT Cricketer, Jak Willcox, who spoke about his battles with mental health last year.

Jono says he is in a good place now, having taken leave-without-pay from the public service in July to take on a high-performance coaching role with Cricket ACT. This role includes an assistant coaching position with the Meteors women’s cricket team.

He says a return to cricket has helped him enormously. “I’m relishing the opportunity to coach, it’s very different to playing, but I enjoy helping young players.”

Although not playing at the moment so he can focus on coaching, Jono says he is looking to make a return for the Weston Creek Molonglo Cricket Club in the T20 format. The shorter form of the game allows him to spend more time with Kim and their two young children.

In essence, Jono says the key when experiencing mental health issues in the first instance is to start a conversation. This is why he has thrown his support behind the Cricket All Stars for Mental Health Day on 17 November at Phillip Oval to raise money for Lifeline.

The Comets Old Boys will also play the SCG XI (captained by Stuart MacGill) as part of the day.

Proud of you Jono Dean and Kim Dean.

William Coats - 27 minutes ago
The land tax was to stop people “land banking” houses should be used as homes not stagnant investments View
Lea Powell - 6 hours ago
William Coats it takes time to change policy directions. It’s not as simple as a click of the fingers. View
Lea Powell - 6 hours ago
Kerry-anne Stafford appeal the decision. Why have they revoked it. Don’t take that lying down. View
News 5

bj_ACT - 6 hours ago
Yes razor it’s a good point. Agree there are pockets of Tuggeranong and Belconnen that could do with some ACT government do... View
mattm - 6 hours ago
There are almost 130 Councils in NSW, and most of them do a much better job with municipal services than the ACT Government.... View
Heavs - 8 hours ago
Competent councils - like this one? https://www.canberratimes.com.au/story/6978805/nsw-central-coast-council-to-be-sacked/ Or... View
Property 7

@The_RiotACT @The_RiotACT
Did you know that it takes an average Australian 10 years to do something about their hearing loss once they realise they're affected by it? https://t.co/E4x3cUjwVr (11 minutes ago)