An artistic perspective on nature, heritage from Russia – with love 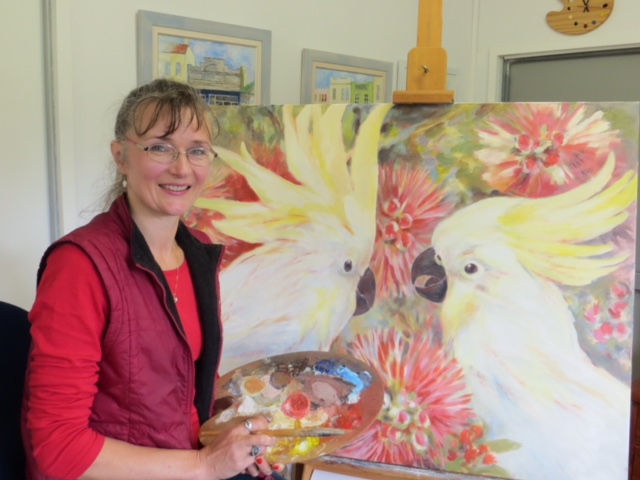 Luck, love and talent helped a Russian artist’s painting of a king parrot find its way into the United States of America Embassy in 2013.

Her career flourished after she left Russia and she now plans turning her talent to recapturing the lost heritage in Goulburn’s main street. It is a hot topic following the former St John’s Orphanage fires that have destroyed another heritage gem.

Ekaterina Mortensen nee Batrakova’s journey began by chance. Alone after work in the spring of 1998, Goulburn social science teacher George Mortensen logged onto his chat room as Alex, his second name. Ekaterina logged on in St Petersburg, Russia, as Katie.

Finding his regular chat room full, George clicked on a related one and came across ‘Katie’ with an underscore.

“I knew a Katie in the chatroom that I always went to and she was actually Wendy in London. So I said ‘Hello, is that you Wendy in London?’” Mr Mortensen said. 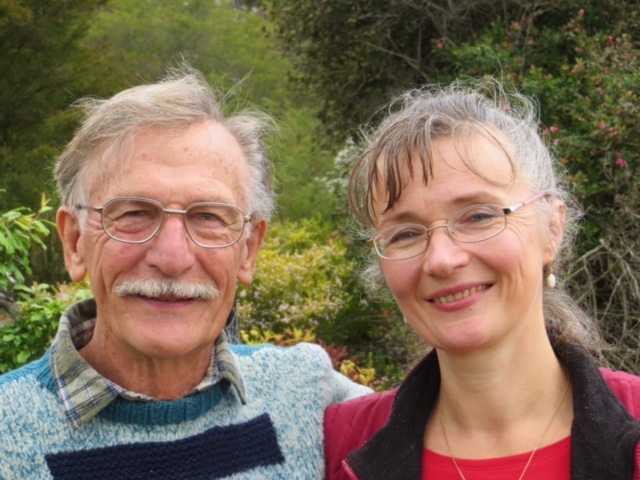 Tears fill his eyes as he recalls what happened next, because it changed their lives. “The message came back. No I’m Katerina in St Petersburg. So we started talking and never stopped,” he said.

Ekaterina’s parents had separated when she was two. Her mother died when she was 10. Two aunts raised her, giving her a thorough grounding in St Petersburg’s extensive culture. She was good at drawing and painting too.

Rejecting communism in the 1990s, Russia was in such chaos it was hard to find food in St Petersburg, let alone continual work. Ekaterina was searching on the internet when she met Mr Mortensen.

Among their ongoing correspondence were three of her envelope-sized water colours of flowers which he showed his colleagues, art teachers, who immediately spotted her talent.

The pair visited one another, fell in love and, with little English, Ekaterina came to Australia, and Quialigo, a rural area south east of Goulburn, a far cry from a city of five million people steeped in history, literature, theatres and the classics. They married in 2001.

Gradually, her paintings of the misty bush landscape around her, crimson rosellas and owls began emerging in public. With her husband’s reassurance her work spread to bigger art shows and solo exhibitions.

“Alex gives me constant support, encouragement. It is so important for artists to have someone who believes in you and Alex always believes in me. Always. I really needed, exactly, this person in my life,” Ekaterina said.

Commissions arrived. A neighbour told her United States ambassador John Berry had bought her painting of a king parrot, at the 2013 Canberra Show.

In her final year of an online fine arts degree course with Curtin University she researched the once grand architecture in Goulburn’s main street and now hopes to exhibit in 2017 her drawings of what the streetscape, enriched in the wool boom, would look like today.

“I was really surprised how many were destroyed. It was sad for me because I’m coming from a nice European architectural background. For me great architecture is beautiful and here, instead of preserving it, they just wipe it out and put the concrete box in its place.”

Kit Oates - 7 minutes ago
Jenny Graves As I stated categorically above, I can't stand tailgating. Apology accepted. 🙂 Given that you have still not... View
Jenny Graves - 2 hours ago
Kit Oates those people who get impatient, in my experience, tend to tailgate. If you don't, then that's great and I apologise... View
Francesco Merlino - 3 hours ago
Alex Dee Alex Dee I hope you are right! View
Breaking 12

MERC600 - 37 minutes ago
Have had my first shot of Astra. Had some Panadol the next day due to a bit of a headache. But am unsure if headache due to A... View
Ol L - 3 hours ago
Good friend passed out the evening after after the AstraZeneca shot, hit her head and had 10 stitches. Not a blood clot so no... View
nothappyjan - 5 hours ago
Had pretty much the exact same side effects as you, suppose it shows it is actually doing something for my immune system. Wil... View
Breaking 1

Ol L - 1 hour ago
Canberra. If the traffic gets bad just put in more traffic lights, that’ll work real good…..check out Hindmarsh Drive Phi... View
Deepak Ramanath - 2 hours ago
James Forge Wow, where is this? View
James Forge - 2 hours ago
Deepak Ramanath the government is about to demolish an overpass and replace it with yet another set of traffic lights View
event 1

cats2dog1 - 4 hours ago
Batteries – with lithium ion or lead acid will be the new asbestos problem In 10 years. Salt-water batteries less of a prob... View
Property 34

Fran Corby-Moore - 6 hours ago
I'd like to know how many people registered lots of family members (like young children or relatives/friends outside Canberra... View
show more show less
*Results are based on activity within last 7 days

@The_RiotACT @The_RiotACT
@networkonegroup is a great way for business owners and professionals to meet new contacts, support each other and help grow their businesses https://t.co/Mbktqyqcl5 (14 minutes ago)

@The_RiotACT @The_RiotACT
Canberrans have been warned against travel to metropolitan Sydney and ACT borders have been effectively closed to Sydney residents. Here's how the ACT is responding to the growing Sydney COVID-19 outbreak https://t.co/ftCMKm59mv (41 minutes ago)