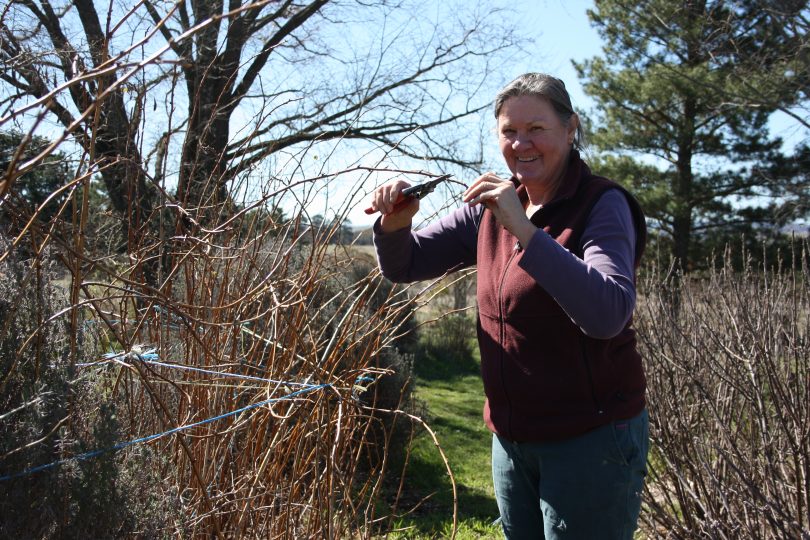 Pruning in the winter months, in preparation for Spring growing. For Julie Anderson from Parkesbourne Produce, growing her specialist berries is a labour of love. Photos: Supplied.

Parkesbourne Produce near Goulburn has won its second gold medal in one of Australia’s most prestigious food industry awards, consolidating its industry reputation for quality berries with a focus on flavour and freshness.

The boutique enterprise was awarded the medal in the 2018 Delicious Produce Awards for its Rainbow Raspberries. The awards are judged by the country’s top chefs and food celebrities, including Peter Gilmore, Matt Moran and Maggie Beer.

Parkesbourne Produce supplies some of Sydney and Canberra’s top restaurants and is best known for its Alpine Strawberries – a previous gold medal winner in the 2017 Delicious awards.

At the helm of Parkesbourne Produce are Julie and David Anderson who have been building their reputation in the food industry since they moved to the Goulburn region from Sydney in 2010.

“This is a retirement project gone mad,” Julie said. “I started off growing fruit and vegetables for us, but we had so much produce we ended up expanding. Initially, we grew heritage varieties of vegetables and then expanded into specialist berries.”

The most important distinction between the berries grown at Parkesbourne Produce and store bought is the flavour.

“There is an obvious difference in flavour between our berries and what you get in the supermarkets…flavour is the ultimate goal. We are never first to market because the flavour is all,” Julie said.

The Parkesbourne Produce berries are not chemically treated and are picked and delivered at peak ripeness.

“My son is a chef and used to be head chef at the Sepia Restaurant in Sydney. We initially supplied Alpine Strawberries to Sepia and then began growing red and black currants and other berry varieties such as boysenberries.”

Julie is a former science teacher and has studied ecology and botany. She was also raised on a farm and comes ‘from a long line of good cooks’. The move to the Goulburn region was deliberate because of its acidic soils and cold climate.

“It had the main principles; soil, climate, good access to markets.”

“Growing our produce is not hard work to me; it’s not like a job but a lifestyle. I was raised on a farm and am used to the lifestyle where there are no boundaries between work and life.

“And I love cooking which is a family trait – we all bake and cook. One year my freezer was filled with leftover boysenberries which I gave away to family and friends when they visited. I would use them when I cooked roast pork, first covering the tray with berries and onions and resting the pork on top. Also chocolate self-saucing puddings and mousses.” 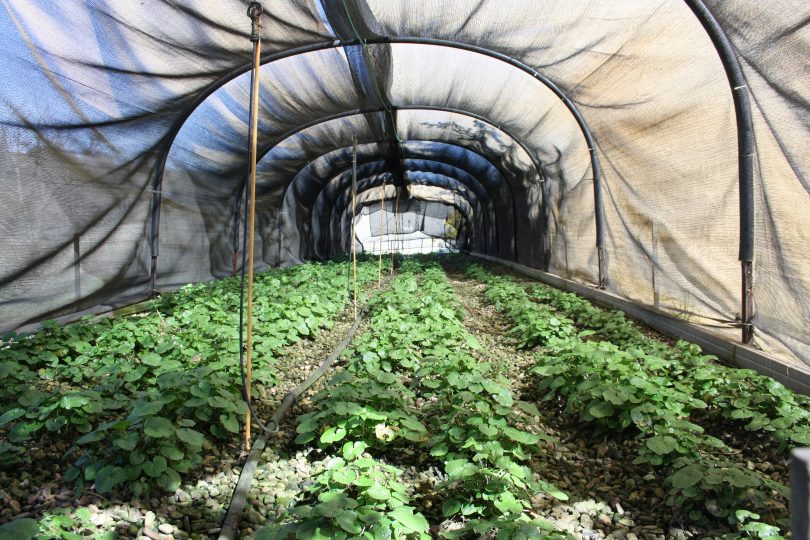 Shade cloth over this Wasabia plantation protects the produce from frost and, in the summer, rapid evaporation of water from the soil.

Despite the current drought, there have also been lessons in production efficiency.

“In dry times you do learn a lot more about production methods. Does the produce need as much water, and mitigating evaporation rates?” Julie said.

“You also look at different watering regimes – irrigation systems, and mulch. There are also problems in wet years – fungi and mould need to be managed.”

It’s not uncommon for chefs to visit Parkesbourne Produce to sample and choose their berries. Along with the berries, Julie and David have expanded into plums – the varieties best suited for cooking and eating.

“They [the chefs] buy and order what they want.”

Most of the Parkesbourne Produce berries are grown from English varieties.

“In the future, I want to really continue to experiment with unique varieties and introduce them to market.”

Aside from berries and plums, the Andersons have a trufflery, an apple orchard, and grow Wasabia on their 100-hectare farm. A portion is also fenced off for native vegetation to encourage natural habitats for local flora and fauna.

The Delicious Produce Awards are designed to celebrate the country’s most outstanding ingredients and regions, and inspire sustainable producers like the Andersons.

“It’s not easy to win a gold medal in the Delicious awards; you have to be the top in your field. Produce has to be outstanding and produced in a sustainable way without chemicals and using natural methods,” Julie said.

Keran Niquet - 3 minutes ago
Paul Casimir . What planet are you on? I pay registration fees on both cars. Cyclists do not! View
Paul South - 2 hours ago
They are capable of being part of thr commuter equation. Why place limits .... View
Michael Kater - 2 hours ago
Paul South E-bikes are legally required to only be electric assist up to 25km/h. View
Opinion 126

Ray Young - 11 minutes ago
Nb: I won't address the fauna question as that is a divisive situation. It is like many mistakes of the past, eg: white Austr... View
Lynne Staunton - 25 minutes ago
Ray Young all sides are trying to rewrite history. And the fauna story has been around and been told for years. Usually by pe... View
Jenny McInnes - 28 minutes ago
Lynne Staunton I do not know what you are referring too? View
Food & Wine 31

Robyne Mitchell - 3 hours ago
What about the people who lost their livelihoods and houses as a result of this fire? View
Louise Flood - 3 hours ago
Robyne Mitchell and the Blue Mountains fire that started with in Lithgow View
Martin Budden - 3 hours ago
Phill Wall when you realise you've made a mistake the first thing to do is own up to it, then you can fix your procedures to... View
Community 2

Andrea Mya Riboust - 5 hours ago
Jamie Angela our large noisy friends from up north, must have just been a particularly busy couple weeks for them 😄 I thin... View
show more show less
*Results are based on activity within last 7 days

It's the week before the national holiday that causes division across the country, so it wouldn't be right for me...
Property 39

Indigenous people in the ACT are experiencing increasing incarceration rates and over-representation in the justice system, with a ministerial briefing...
Opinion 35

Whenever a story about cycling appears, it activates an avalanche of pent up angst from the wider community. Predominantly it’s...
Property 32

@The_RiotACT @The_RiotACT
A dragway gets the thumbs up from many of you. And on road matters, this week's poll asks if cyclists get a fair go on Canberra's roads? https://t.co/EC199gbmZv (1 hour ago)