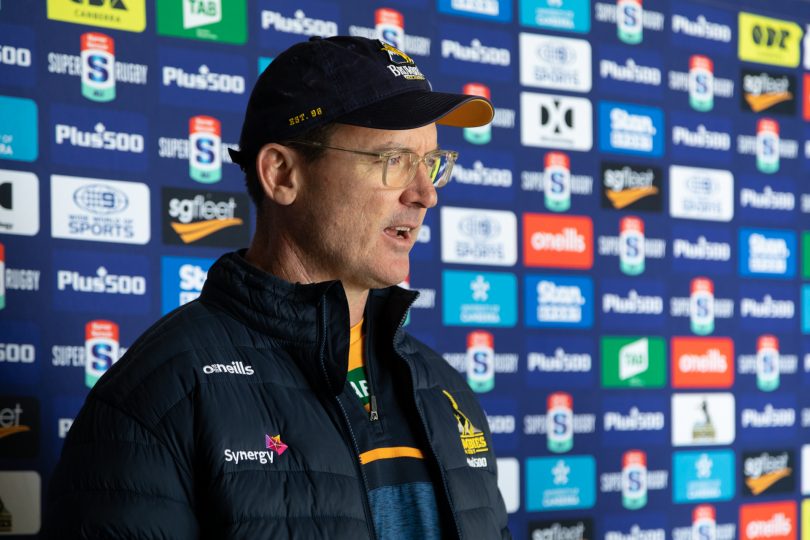 Brumbies head coach Dan McKellar will vacate his position with the club at the end of the 2022 season. Photo: Michelle Kroll.

To this day, the majority of players involved in the 2004 coup to have Brumbies head coach David Nucifora sacked remain reluctant to speak publicly about the events that transpired at the ACT club.

It was uncomfortable for all involved to say the least, and not just for the players. Yet a number of players had expressed concern to then Brumbies CEO Rob Clarke about Nucifora’s coaching style.

Working in the media during this time wasn’t much fun either as various factions had formed.

According to several players I have spoken to off the record, the issue was Nucifora’s reluctance to enthusiastically embrace game plans formulated by the players.

Most would suggest it should be the other way around, with the coach devising the game plan with input and buy-in from the players. But the considerable involvement of players in decision making had a strong history from the time the Brumbies franchise began in the then Super 12 competition under coach Rod Macqueen.

The exact reasons behind the Nucifora sacking remain unclear. Whatever the reason, Nucifora was told by the Brumbies board in April 2004 that his contract would not be renewed at the end of the season.

The board effectively took the side of a playing group that was littered with Wallabies.

I was pulled aside on a number of occasions to be told that Nucifora wasn’t sacked, and that his contract had simply not been renewed. To me, this was just spin and it certainty wasn’t David Nucifora’s view as he labelled his treatment by the Brumbies as appalling.

Personally, I felt his sacking was an injustice and wrong, and I said as much at the time.

Players and coaches don’t have to get along to succeed.

In 2004, Nucifora guided the Brumbies to the Super Rugby title just months after being told he wouldn’t be retained for the 2005 season. The suggestion that the players coached themselves, such was their collective rugby knowledge, was nonsense.

This brings me to the current day as the Brumbies start the search for a new head coach with Dan McKellar joining the Wallabies full-time after the 2022 season.

What input will the playing group have in selecting the new coach?

I expect they will have some input, but it won’t be to the extent of 2004.

McKellar has been impressive as Brumbies head coach since joining in 2018, taking the team to the finals each year and winning the Super Rugby AU title in 2020.

He has worked hard to connect the team with the community.

Steve Larkham would appear an obvious candidate, having coached the Brumbies from 2014-2017 following a stint as assistant coach and his stellar playing career. He initially worked with Jake White, taking the team to the 2013 Super Rugby final, then co-coached with Laurie Fisher before taking over following Fisher’s departure to the UK.

He is currently part of the coaching setup at Irish provincial club Munster. He has also proven he can work alongside Fisher, a man regarded as one of the best forwards coaches in the world.

Fisher is the current forwards coach at the Brumbies.

Whether the Brumbies are looking to return to this former setup remains to be seen.

Fisher is thriving in his current position and there would be a reluctance from both parties to take him away from a hands-on coaching role which has proven to be so effective.

Peter Hewat, now coaching in Japan after success in his assistant role with the Brumbies, deserves to be considered, as does current assistant coach Rod Seib.

There will be plenty of candidates given the Brumbies standing in world rugby. There’s no doubt the players will have a say, but how much weight is given to their input remains to be seen.

Hewat was the best player to never wear a Wallabies jersey, I’d give him a go.