Ask RiotACT: What has happened to Kaleen petrol station? 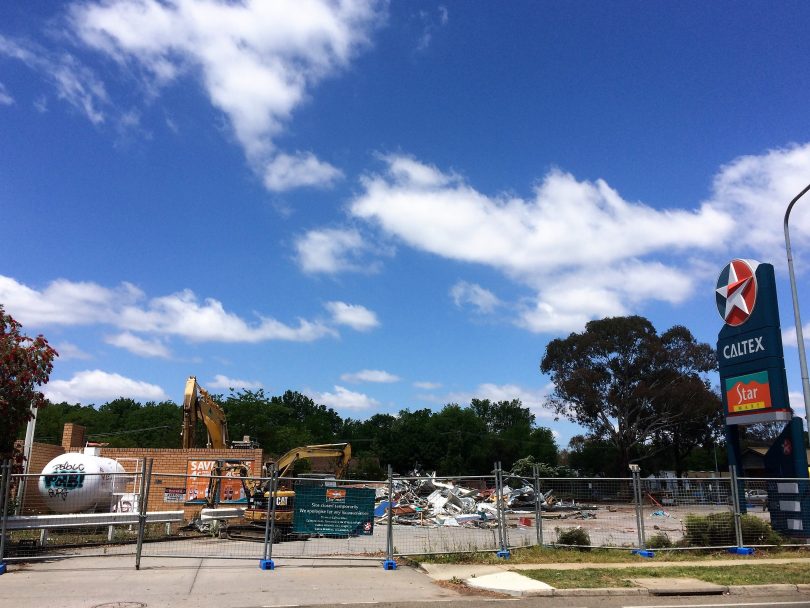 Does anyone know what has happened to Kaleen’s Caltex petrol station? If the signs are to be believed it has only been closed temporarily for renovations and will reopen soon. The only problem with that is that it has now been closed for well over a year and last week the bulldozers moved in! Now there aren’t even any bowsers left. 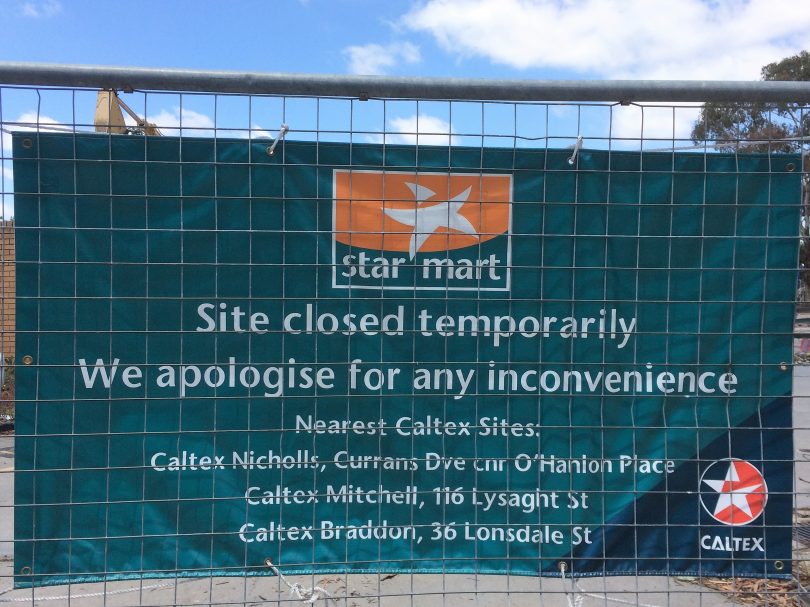 Not having a petrol station has been a real pain. It means travelling to Giralang or Belconnen for petrol and that is never convenient when the tank is close to zilch. It has been frustrating but we were trying to believe those signs about it reopening. Now that is looking less and less likely and it is very frustrating not knowing what is going on! I am sure that I’m not the only Kaleen resident who feels that, when it comes to petrol stations, my patience is ‘running on empty’!

What is going on? Can anyone tell me?

7 Responses to Ask RiotACT: What has happened to Kaleen petrol station?
Filter
Showing only Website comments

So that seems to be Bradon, Ainslie, Kaleen, Kambah, Stirling? Fisher? Curtin – has that gone too?
There seems to be a pattern here. The same pattern as is all over Canberra now; allow services (eg Lonsdale St services for the inner north suburbs), historical buildings (eg along Northbourne), Public housing (eg peppered & salted all through the city – not in blocks, in single units), anything else that can be turned into an instant money maker.
It is, I think, a continued expression of Bob Hawke’s legacy – forcing self government on the Territory to relieve the Federal government of it’s responsibilities.
As he said, when asked how the ACT would survive economically, “Well, they can just sell land”. So now that’s all we do – let things run down & make money selling the land it sits on when we finally destroy it.
If this is not what we want, we are going to have to do things smarter, with more creativity & innovation.
The government that gives us 1800’s technology for 21st century transport & by slight of hand convinces the majority that it will provide transport needs even though the Minister himself said it was not going to provide public transport even though it was intended for land development, is highly unlikely to be able to provide any level of creativity & innovation.
Methinks this commmunity is in deep yogurt!

That took an eternity and didn’t look much different once finished. Probably the same builders who took about 6 months to put a footpath through Haig Park, a few years on Constitution Avenue and a few more years on Bowen Place.

Might be the same people who did the very expensive improvements to Anketel St Tuggeranong.

I use the word improvement with caution.

Result of Government expenditure has been.

Remove a few nice and healthy shade trees and replace them with some cheap saplings.

Why does ACT government keep sending into Tuggeranong the 60 minute makeover team to perform half baked improvements but still pay a motza for a cheap job.

Work has started on the demolition of the old site.
I was told (but can’t confirm) that the owner of the Kaleen site is the same as the Caltex Braddon.
The DA online shows a totally new design of petrol station with the shop/office area next to the current Gwyder Square carpark.

I worked at the Kaleen Caltex a decade ago, and at the time the franchisee had Kaleen, Braddon, Kambah & possibly one other servo in their portfolio. They were all Caltex StarMart service stations, as opposed to the Caltex/Woolworths service stations located elsewhere in Canberra.

That took an eternity and didn’t look much different once finished. Probably the same builders who took about 6 months to put a footpath through Haig Park, a few years on Constitution Avenue and a few more years on Bowen Place.

Work has started on the demolition of the old site.
I was told (but can’t confirm) that the owner of the Kaleen site is the same as the Caltex Braddon.
The DA online shows a totally new design of petrol station with the shop/office area next to the current Gwyder Square carpark.

It’s a knock-down rebuild. The DA was published about 7 months ago for comment; I guess this means they got the go ahead.

Carl Ostermann - 28 minutes ago
In the nineties, it was adventurous gnomes sending their owners... postcards from all over the world View
News 30