Belconnen United in the safe hands of Finn Jurak 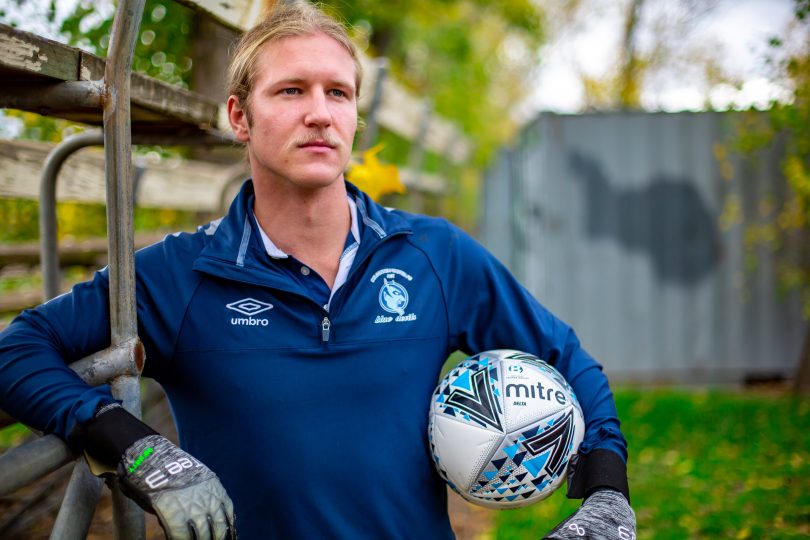 Finn Jurak made his first-grade debut when he was just 15-years-old. Photos: George Tsotsos.

There have always been certain things goalkeeper Finn Jurak has been good at throughout his young footballing career: snatching opportunities with both hands was one of them.

If it wasn’t for three opportunities that Jurak grabbed on to during his career, who knows where he might be?

Jurak is playing his third season as a first-grade goalkeeper at the tender age of 19, having first pulled on the gloves just six years ago when his first opportunity arose.

“I was actually a striker growing up and I thought I was actually alright at it,” he said with a laugh. “I was 13 and I was playing in the ACT’s high-performance program.

“Our goalkeeper got injured and I was this really enthusiastic, athletic kid who put his hand up. My only experience with goalkeeping was when my older brother needed shooting practice, and he would belt balls at me.

“I jumped in goals and played really well, so they recommended I train with Paul Jones, a former Welsh international goalkeeper, so I went for one training session and honestly I hated it.

“I just wanted to dive around and save shots but he was really focused on technique so I didn’t really enjoy it but I kept at it and slowly got better.”

Two years later, Jurak made his first-grade debut when he was just 15-years-old, funnily enough against his current side Belconnen United. He remembers the result was a 2-1 loss and his side played with 10 men for nearly 80 minutes after a red card early in the match but that wasn’t the key moment that he can recall like it was yesterday.

“I had just played the under-20s game when the first-grade coach came up to me and said that their keeper was sick and they needed me to play,” he said. “It was out of nowhere, so I didn’t realise how big of a deal it was at the time. 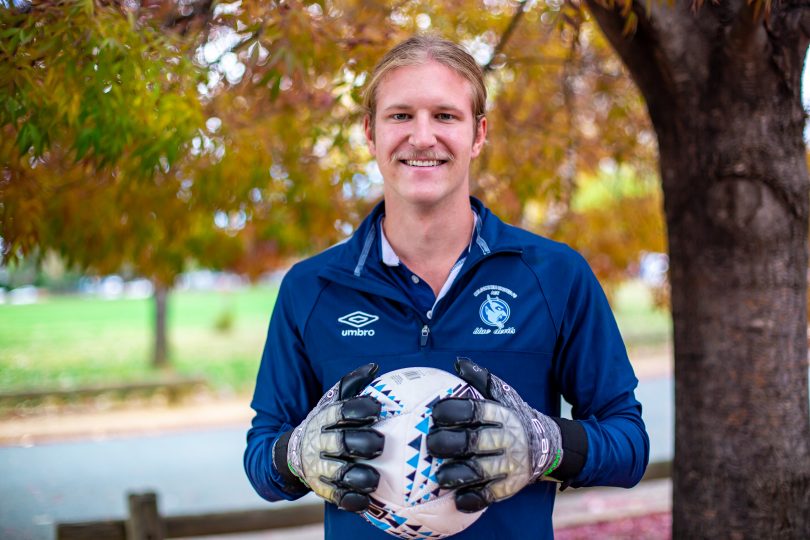 Jurak says 2017 was the best year of his career. Photo: George Tsotsos

“I was a tiny little fella, and every time there was a free-kick, no matter where it was, the opposition would yell out, ‘hit it into the box’ or ‘put it on the keeper and smash him’,” Jurak recalled with a wide grin.

“Right then and there I knew I wasn’t going to let it happen. That was the match that got my foot through the door.”

In 2017, he signed a contract with Belconnen United, making his debut for the club against defending champions Canberra Olympic. That was the game he firmly grasped the position and made it his own, helping the Blue Devils to win the league.

Jurak is adamant that 2017 was the best year of his career but is happy for 2019 to replace it.

“That was the year I grew as a goalkeeper,” Jurak recollected. “A lot of the time before that I was still developing but that year was when I became a senior goalkeeper. From that season onwards, I felt like a different person and a different goalkeeper.

“Every training session and every game I am still learning new things. I am still so young and I hope that I will grow physically and with experience.

“When those opportunities arise, you have got to take them and luckily every single time one has arisen, I have taken them.”

Rosalind Turner - 31 seconds ago
Shawn Mulgrue just hope your dept doesn't have to move. My fed govt work area is moving and the new dept of Treasury rules on... View
Vander Leal - 5 hours ago
You had spread city centres with departments and buildings, but that was way too boring, so you ask to put down the old build... View
Andrea Mya Riboust - 10 hours ago
Material for a Utopia episode 😄 View
News 41

Steve Brinkman - 1 hour ago
Margaret Freemantle she cant View
Jennifer Fraser-Brown - 13 hours ago
Yep try the Pfizer one - the rate of anaphylaxis caused by the Pfizer vaccine is higher than the rate of thrombocytopenia fro... View
News 30

Peter Robinson - 7 hours ago
Steve Jones copy that. Love the motion lotion guzzling V8 . Just for the sound you know ..... View
Luc Stofmeel - 8 hours ago
The article forgot the best option, an actual scooter! $300 a year to register, free parking everywhere, runs on the smell of... View
Acton - 9 hours ago
If these financial advisors calculate the running costs of a car for an 'average' Canberran as $16,000 a year then I would be... View
Food & Wine 44