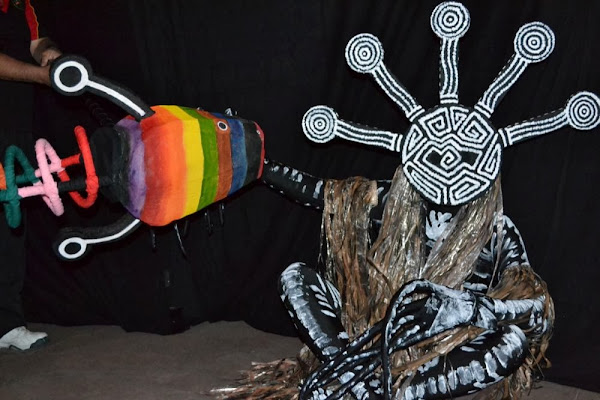 Word reaches us of something a little bit different in town for the Centenary of Canberra Children’s Festival:

Biami, a local production specially commissioned for the Centenary of Canberra children’s festival, is a cross-country collaboration between a Wiradjuri man from central western NSW and a Noongar playwright and poet from Western Australia.

Co-creator Duncan Smith, who hails from the Dubbo region, is a professional performer and visual artist well known in Canberra for his traditional and contemporary art and for his work with the popular dance group The Wiradjuri Echoes.

Maitland Schnaars, who plays Biami, is a Noongar man and graduate of the WA Academy of Performing Arts who co-founded international theatre company Corazon de Vaca.

“Their collaboration resulted in Duncan developing Biami into an interactive theatre and dance performance as part of the Centenary’s Indigenous cultural program,” said Adam Stankevicius, the Centenary’s General Manager.

“It will be performed several times a day at Kids, Creatures and 100 Harlequins in Glebe Park this Friday and Saturday, and the company hopes to remount it for future touring.

chewy14 - 10 minutes ago
Wow, polling commissioned by a left wing think tank finds that the left wing Greens are going to do really well at the next e... View
News 1

JS9 - 27 minutes ago
Gee the ACT really does scrape the bottom of the barrel to find political nominees on all sides of politics.... just another... View
News 20

Alex Fulford - 3 hours ago
Elections of course, lol ya ain’t getting my vote 😂😂 View
Michelle Cooper - 14 hours ago
And some of us have both. View
Daniel Duncan - 15 hours ago
Julie because of Covid-19. Once it ends it will go back up. View
News 10

Chris Sant - 14 hours ago
Gladys is an absolute disgrace. Completely ridiculous to suggest that people who have been doing essential work in country Vi... View
Denise Bourke - 17 hours ago
Anne Cahill Lambert I keep waiting to hear that the poor Albury hoteliers have been given Covid quarantining status so that r... View
HiddenDragon - 18 hours ago
If there are arrangements that allow freight from Melbourne to travel through NSW to supply ACT and NSW shops, surely those a... View
News 77

@The_RiotACT @The_RiotACT
The West Basin place plan has been released by the ACT Government, providing valuable detail about the multi-year development, but little mention of where the area's residents will live https://t.co/ThGXcooFe6 (13 minutes ago)

@The_RiotACT @The_RiotACT
Police have renewed their calls to find Amara Hynes, 14, who has not been seen or heard from since 5:00 pm on Saturday at Jerrabomberra https://t.co/hQ4E3HaQJ3 (27 minutes ago)