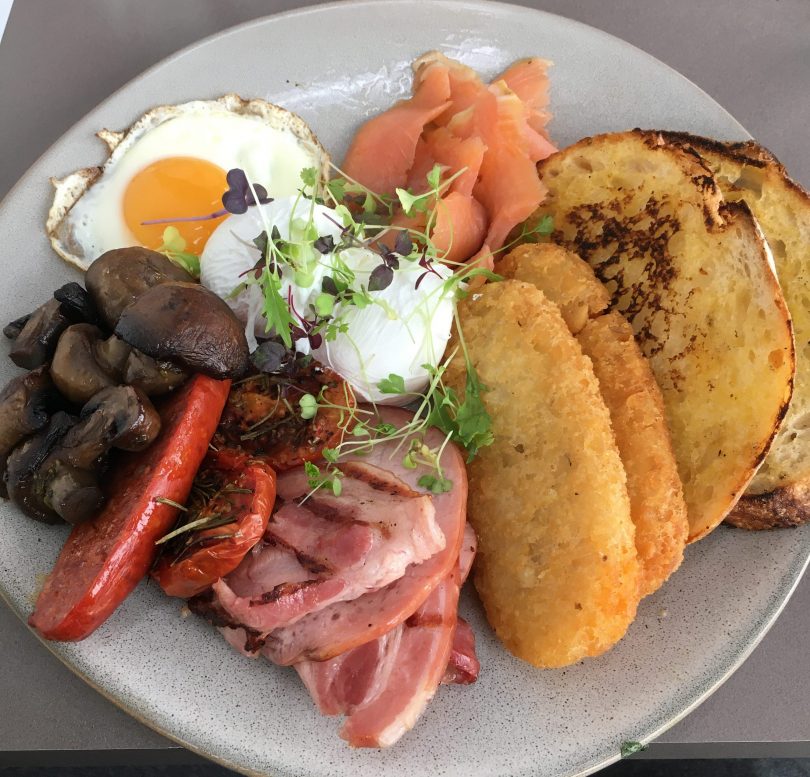 Big Breakfast at Plumb on Tennant (some extras may have been ordered, but salmon’s good for you, right?). Photo: David Murtagh.

It’s an iron law of the restaurant trade that we eat with our eyes. Don’t try it. Been there, done that. Worst vindaloo ever.

But obviously, we want food to look good. We also want the place we eat to be inviting. That’s why restaurants spend small and not-so-small fortunes making their establishments homely, be it hatted restaurants or a cafe where you grab your morning coffee, bacon and egg roll, and post-roll mid-morning muffin.

A cosy environment makes the dining experience more enjoyable and more memorable. And it sure beats curry in your cornea. 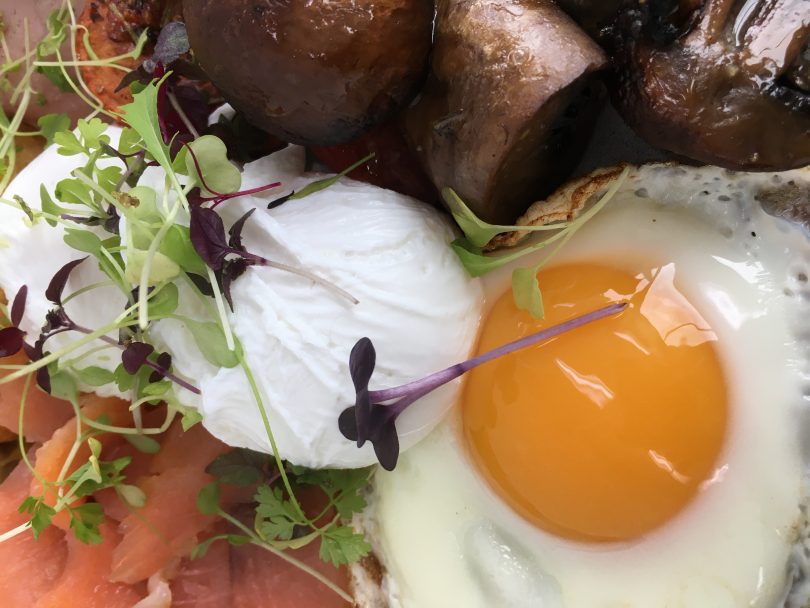 No one seems to have told any of this to the owners of Plumb in Fyshwick.

Inviting? You’re stretching. Three for three! And yet …

Best brekkie spot in Canberra? It’s got to be close. But you wouldn’t know it looking from the street. 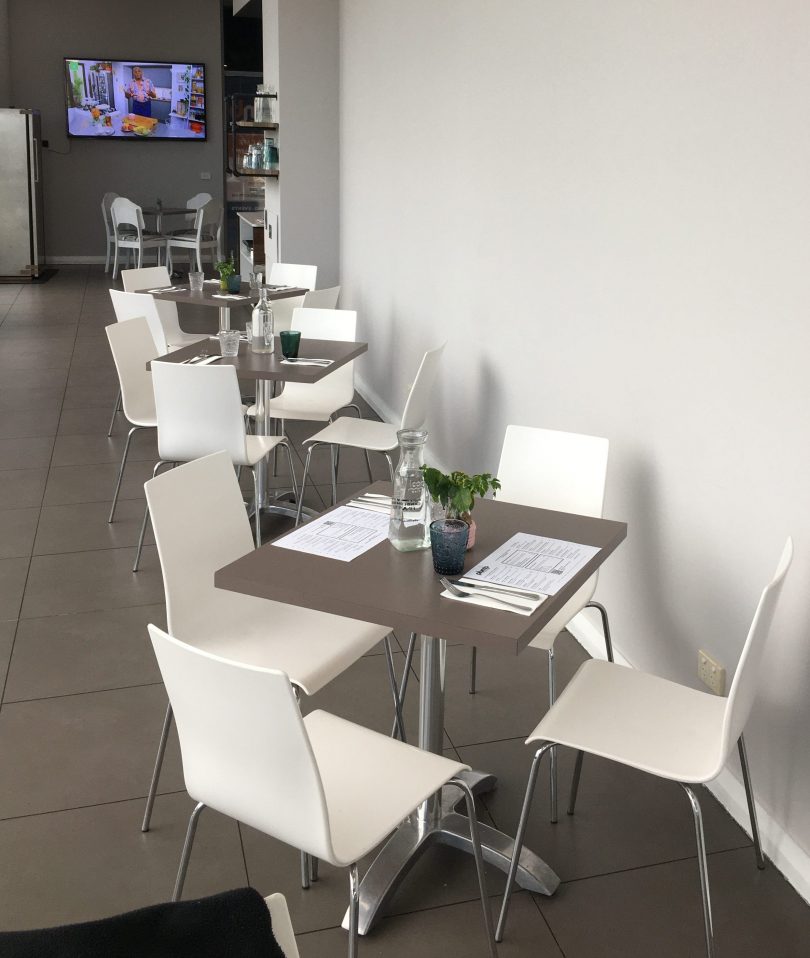 Even Ainsley Harriott pops in for brekkie to admire the decor. Photo: David Murtagh.

For a start, it’s in Fyshwick, perfectly situated across the road from a power substation. And the name – Plumb – and the location suggests it sells, you know, pipes and whatever else plumbers use. Money-counting machines?

But it wouldn’t be the type of place that would sell to the public – they’d sell serious trade, wholesale stuff, and be haughty about it when you try to buy that thing that goes on the whats-it … you know the thing! Even the building has that vibe. 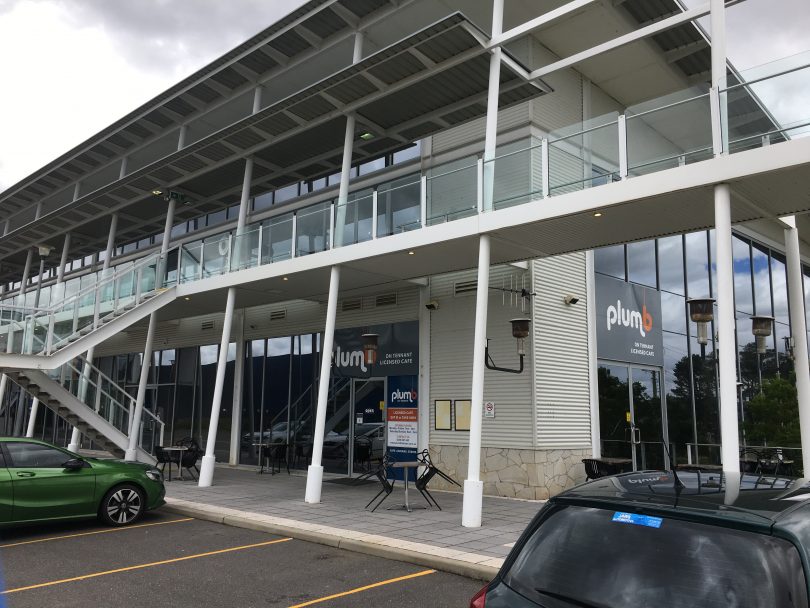 But forget all that, bite the bullet, cast aside doubt. Just go.

It’s across the road from Domayne, so pop in when you’re waiting for your interest-free credit application to be approved (don’t worry, it will be). Grab a coffee – Veneziano, very nice – and enjoy the template for what a great Big Breakfast should be. 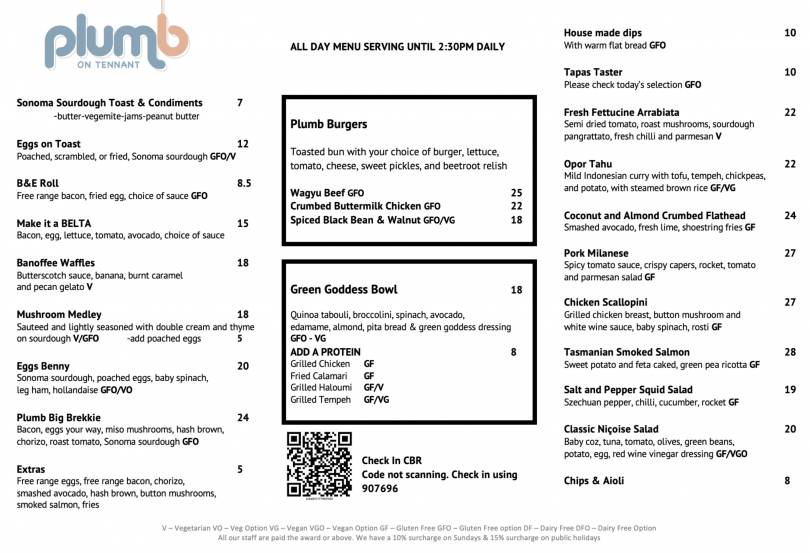 For a start, it hits the price point. The Plumb Big Brekkie is $24 and you get the soon-to-be-mandated seven items: bacon, eggs your way, miso mushrooms, hash browns (yes, plural!), chorizo, roast tomato, Sonoma sourdough.

It’s a rare thing when vegetables are the star of a great breakfast; after all, they’re only there to fill some space and assuage your guilt that you’re eating half a pound of bacon and whatever the hell is in a chorizo (no emails, please, it’s best not to know, as Bismarck observed), but the miso mushies and smashingly seasoned tomatoes are killer, not filler. 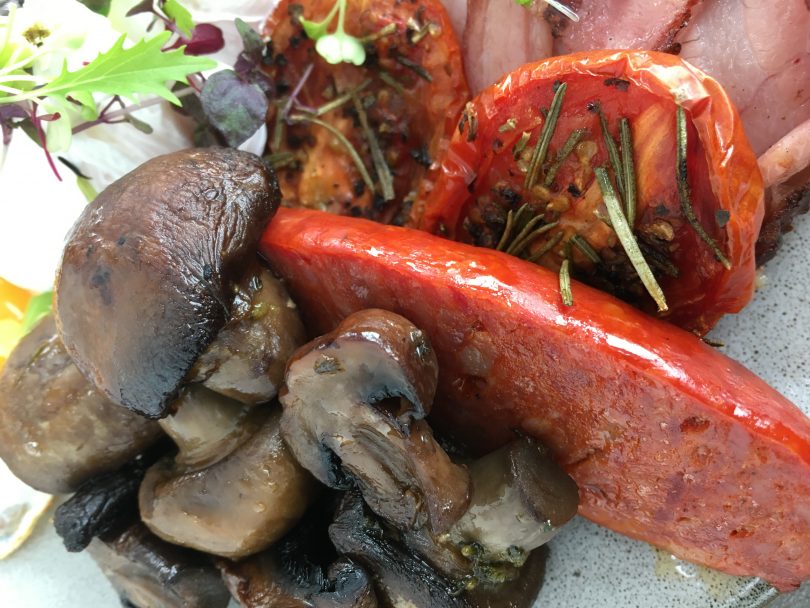 Of course, we don’t just eat with our eyes. We also want good service. Another big tick.

Order the Plumb Big Brekkie and you get a small bowl of salt and pepper; order smashed avo (not on the menu, but they accommodated) and you’ll get fresh lemon.

OK, OK, seasoning and lemon is no big deal. Agreed. So why is the offer so rare? Unless you’re ordering dry white toast, four whole fried chickens and a Coke from Aretha Franklin, bring butter! Please! Seriously, when did butter become a luxury item? Are we rationing so we can invade Normandy?

The point is, you shouldn’t have to ask. It’s the thought that counts, and the waitresses at Plumb thought to ask, so, as a customer, you aren’t left waving your arm like you’re hailing a cab in a storm to get the basics.

And the toast was on the side. Happiness. 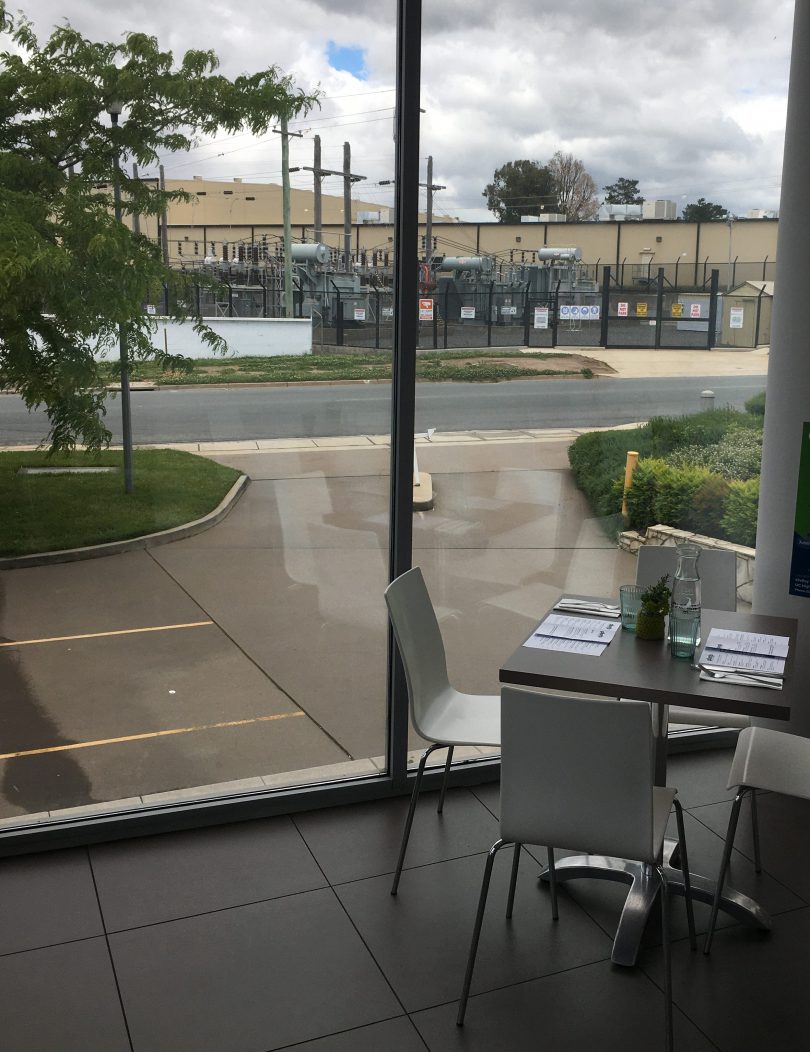 Bottom line: Plumb should not work as a cafe. At all. The location is absurd. It’s utilitarian to the point of sterile, which, oddly, is reassuring in these pandemic times. It’s also spotless. Enter the large glass doors and you can see into the (also) spotless kitchen. It has little atmosphere.

It’s as though practically no effort has been made to play to our senses beyond the plate – like it was done to win a bet. But who cares? It doesn’t matter. They won the bet. And when you serve a breakfast as consistently great as this, you don’t need tricks – the food does the talking. 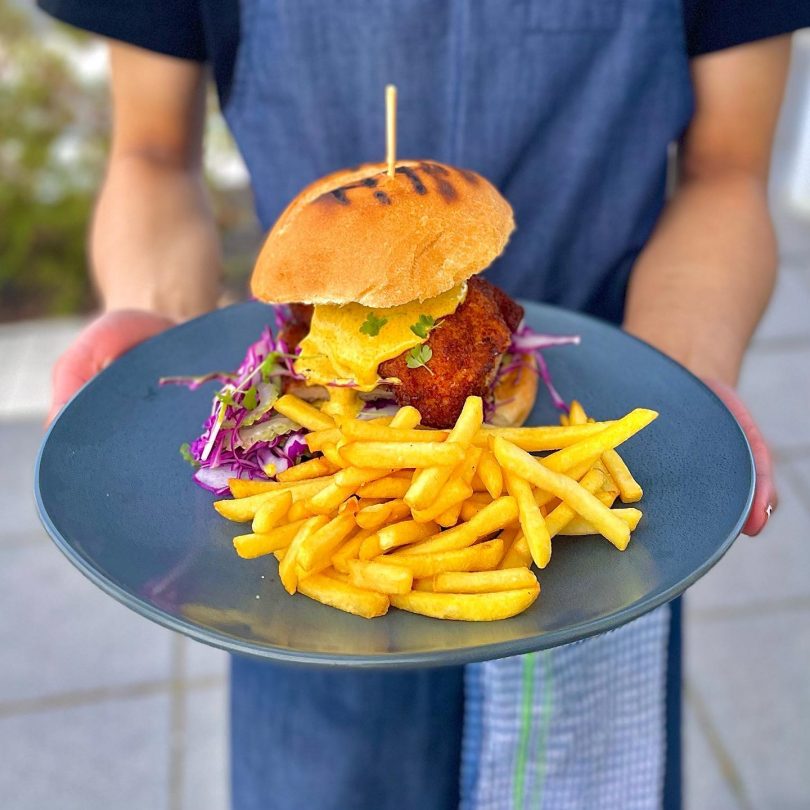 If you’re lucky, the Katsu Pork Roll will be on the specials board when you visit. Photo: Plumb on Tennant.

Toast on the side: Yes. Sinoma bread.

Girls it’s been too long since our post-training coffee/brunch dates!! 🤩🤩🤩

Joslyn Natasha you best believe I’m in for dem foods 🥰

I would cal that a small / medium breakfast😂. No one around here actually does a BIG breakfast these days. They died as soon as Canberra went Hollywood and charge you $10 for an egg on toast🙄

Anyone for breakfast /lunch/ dinner all in one methinks!

Kynan Elliott you could do this

Went there for lunch the other day. Service was great, very friendly, food was really good, will definitely be going back🤗

Miss working in Fyshwick and heading out to Plumb.

Haven’t been for years but it was excellent and they made the changes I asked for.

Thanks for the review. Very reasonable prices. Will give it a whirl for sure when next shopping at Fyshwick Bunnings

Emma Louise - 1 minute ago
Vik Sundar didn’t you use to work here decades ago 🤔 View
Helen Kvalheim Stephenson - 12 minutes ago
We left in 2017. We were lucky. They were only looking after there own interest and charging exorbitant prices for that advis... View
Colin Parton - 12 minutes ago
Farhan Khaliq maybe. Lots of stories to tell. View
Opinion 59

Camille Martin - 37 minutes ago
Milenko-Slavenka Jovanovic then what is it to you either? View
HiddenDragon - 50 minutes ago
It would be easier to take seriously the federal government's utterly over-the-top reaction to Djokovic's stance on vaccinati... View
Greg Hollands - 55 minutes ago
How's the tennis going? View
Opinion 142

@the_riotact @The_RiotACT
Staff shortages due to COVID-19 are hitting every industry, including government services here in the ACT, with two #AccessCanberra service centres currently closed https://t.co/r9MnF3PXCY (32 minutes ago)