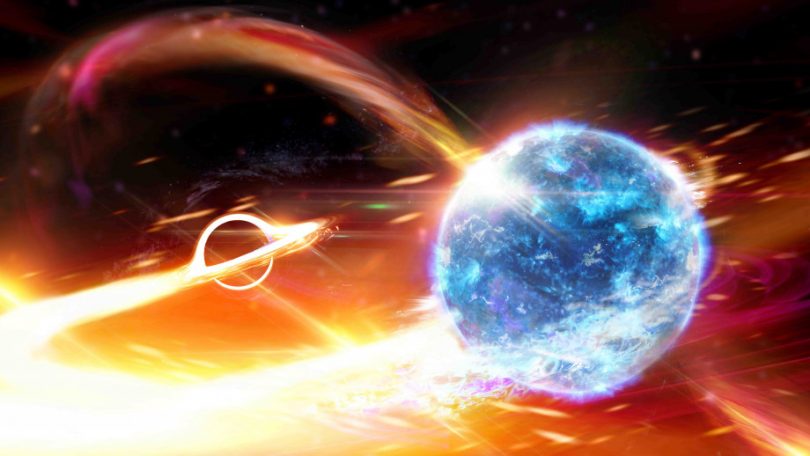 An artist’s depiction of a black hole about to swallow a neutron star. Photo: Carl Knox, OzGrav ARC Centre of Excellence.

Not so long ago, in a galaxy far, far away… scientists from the Australian National University (ANU) detected a black hole swallowing a neutron star for the first time.

The phenomenon was discovered just last week on 14 August when the ANU’s SkyMapper Telescope responded to a detection alert and scanned the entire likely region of space where the event occurred, about 8,550 million trillion kilometres away from Earth.

Professor Susan Scott from the ANU Research School of Physics said gravitational-wave discovery machines in the United States and Italy first detected the ripples in space and time.

“About 900 million years ago, this black hole ate a very dense star, known as a neutron star, like Pacman, possibly snuffing out the star instantly,” said Professor Scott.

While scientists are yet to have any visual confirmation of the event, the observation of the black hole’s gut-busting appetite completes the team’s trifecta of observations on their wishlist, which included the merger of two black holes and the collision of two neutron stars.

Neutron stars and black holes are the super-dense remains of dead stars which form when they run out of fuel and begin to collapse.

Scientists are still analysing the data to confirm the exact size of the two objects, but initial findings indicate the very strong likelihood of a black hole enveloping a neutron star. The final results are expected to be published in scientific journals.

“Scientists have never detected a black hole smaller than five solar masses or a neutron star larger than about 2.5 times the mass of our Sun,” Professor Scott said.

“Based on this experience, we’re very confident that we’ve just detected a black hole gobbling up a neutron star.

“However, there is the slight but intriguing possibility that the swallowed object was a very light black hole – much lighter than any other black hole we know about in the Universe. That would be a truly awesome consolation prize.”

ANU plays a lead role in Australia’s partnership with the Advanced Laser Interferometer Gravitational-wave Observatory (LIGO), which is the most sensitive scientific instrument ever built and comprises twin detectors in the US.

The European Gravitational Observatory has a gravitational-wave detector in Italy called Virgo.

Watch a NASA video of a sun-like star on an eccentric orbit plunging too close to its galaxy’s central black hole. While this is not what the team discovered last week, it shows the fascinating way in which the ever-elusive black holes behave in our universe.