Brumbies get a win in Dunedin! 30 to 19 over the Highlanders

Foxsports has the happy news that the Brumbies have put the wheels back on the cart and rumbled to a solid win over the Otago Highlanders in Dunedin:

Stalwart flanker George Smith has led the Brumbies to a decisive 30-19 win against the Highlanders after his backs launched a relentless aerial assault against their winless Super Rugby foes in Dunedin.

Smith’s highlights included forcing a turnover that led to an early penalty goal and scoring a try off the back of a disintegrated rolling maul in the 31st minute.

The Brumbies continued their trend of blitzing sides early, opening the scoring in the third minute when winger Henry Speight brushed off his opposite Hosea Gear, stepped inside fullback Ben Smith and then carried Ma’a Nonu over the line. 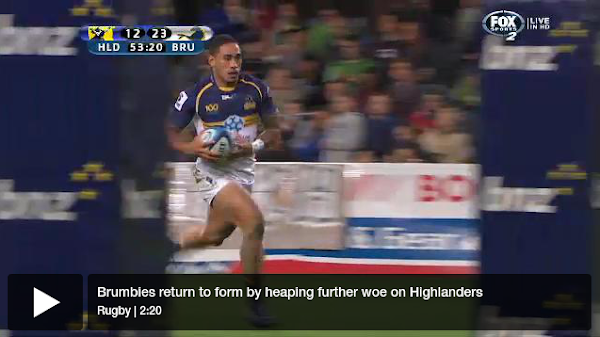 One Response to Brumbies get a win in Dunedin! 30 to 19 over the Highlanders
Filter
Showing only Website comments

Cooby Pedy - 13 minutes ago
mazzie agree with you 100 percent in the .meantime these bloody climate alarmist keep spreading there false BS about renewabl... View
Peter Kline - 2 hours ago
Tony Armstrong great news. View
Mazzie Woodward - 8 hours ago
We don’t have a working hospital and they are building a giant battery 🔋 does anyone else find this utterly ridiculous? View
News 161