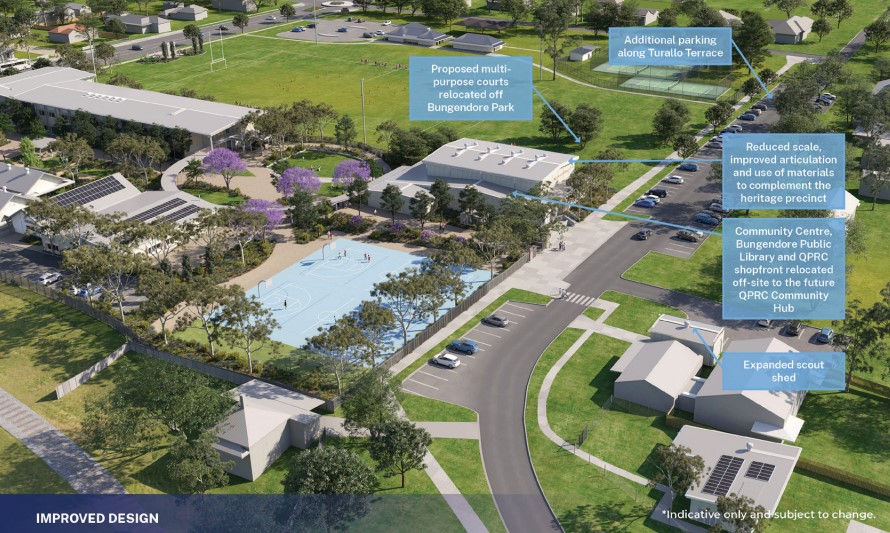 Updated designs for the multi-million dollar Bungendore High School have been revealed, but the 2023 student intake will start their year in demountables.

Ms Mitchell said it had followed months of engagement with the community and stakeholders.

“We are working hard to provide a unique new school with modern facilities designed specifically for this community,” she said.

“I appreciate the community’s understanding as we work to deliver this project, particularly the challenges and delays resulting from Queanbeyan-Palerang Regional Council’s [QPRC] political positioning in relation to it.”

She said the delays meant students would start 2023 in a temporary “pop-up” school.

Councillors have previously refused to support the project due to its proposed location at Majara-Gilbraltar streets.

QPRC Councillor Mareeta Grundy was one of the few in support of the proposal and said the new design was a “great example” of how stakeholders and the community could come together to meet a town’s needs and expectations.

A spokesperson pointed out that moving the Community Centre, Library and QPRC shopfront to a hub with new council offices would bring more visitors to that part of town and better connect the two retail areas of Bungendore.

“It is also fantastic Bungendore Primary School will see additional teaching spaces and a much-needed upgrade to the school playing field, making it a shared community space outside of school hours,” they said.

However, the spokesperson did lament the delays caused due to the relationship breakdown between council and the Department of Education (DoE).

“It’s great that there will be high school education for the children in our community in 2023 as promised,” they said.

“However, it would have been much better if the process had been much more cooperative so the project would be further advanced by now.” 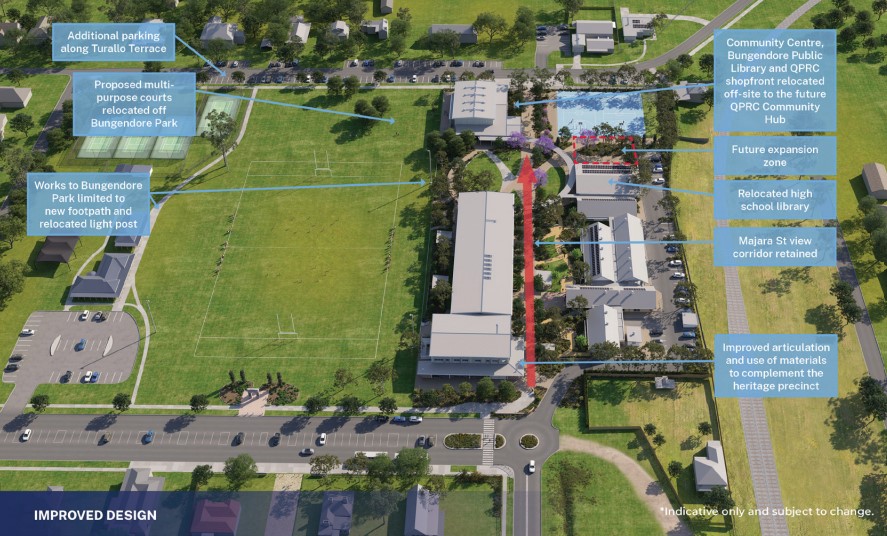 Representatives from the Save Bungendore Park action group said they were not consulted during its redesign. Image: NSW Department of Education.

But not everyone was impressed.

Councillor John Preston said while the DoE’s efforts to address community concerns were to be congratulated, he wasn’t convinced the community’s concerns about the loss of “a critical piece of public property” had been truly taken into account.

“Unfortunately, the result is an even smaller school on a compressed site that has even less chance of expansion and that comes at an eye-wateringly high price tag of $71 million,” he said.

He also criticised the state government for blaming council for delays to the project and said all council had done was represent the interest and concerns of the community.

“Had the DoE gone ahead with a more appropriate site, the build would be well underway and the community could be celebrating students attending a proper school as promised in term 1, 2023.”

Representatives from the Save Bungendore Park action group were also critical of the new plans and said they were not consulted during its redesign.

“No one ever thought that the long-promised Bungendore High School would be nothing more than a bunch of demountables,” a spokesperson said.

“This has only happened because the government chose an unsuitable site with no due diligence and refused to listen when we explained why the original plan wouldn’t work.

“Now they’ve been caught short because their original plan has failed.”

The spokesperson said moving amenities westward resulted in an “even worse” result for the park.

“After all these setbacks, why is the government still pressing on with this doomed plan?”

At the launch, Deputy Premier Toole said construction was expected to begin “shortly” after the State Significant Development application was approved.

The glossy photos are reflecting the previous plans. Here’s a correction.

And the council hasn’t delayed anything. The DofE withdrew from negotiations with the council last year. It still hasn’t got approval from the NSW State Planning Board. At least get the facts right.

Kati Mann- except it’s now July and they were incredibly vague about the response to submissions… So that could still be weeks or even months away.

Good luck getting Jacarandas to flower like that in Bungendore!