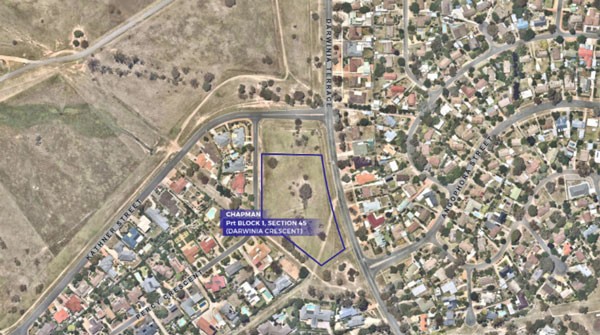 The process that allowed the redrawing of a bushfire zone to pave the way for the proposed Chapman public housing project is flawed, according to the group fighting the development application.

The Darwinia Park Action Group said the proposed 20-unit Chapman public housing site – bounded by Darwinia Terrace, Kathner Street and Percy Crescent – was removed from a bushfire zone in June after members of the community presented their bushfire concerns in detail to the Public Housing Renewal Taskforce the previous month.

The DPAG said the ACT Government used a desktop tool to remove the site as well as hundreds of houses in Weston Creek from their designated bushfire prone areas despite the tragic losses in the same streets in the 2003 bushfires.

It said that in Chapman 270 houses were excised from the suburb’s previous Bushfire Prone Area and in Duffy 35 houses were taken out of the zone.

New boundaries for Bushfire Prone Areas across Canberra have been drawn using an automated laser device called LiDAR that was introduced last year.

In answer to a question on notice in the Legislative Assembly, Planning Minister Mick Gentleman had told Liberal MLA Giulia Jones: “Emerging science, such as LiDAR, also allows us
to make more accurate determinations on the risk of bushfire on properties.”

But the DPAG said LiDAR measured radiant heat, not fire carried by embers or wind. “In Chapman and Duffy, the 2003 disaster was attributed by the CSIRO to embers and wind,” it said.

The DPAG said that a bushfire symposium in Canberra last July was told by an ESA official that LiDAR could model 16,000 properties on the urban edge in only one hour, with an accuracy rate of “up to” 73 percent. The official had said it was a decision-support tool, not a decision-making tool.

“The use of a desktop device to determine the risk factor in areas that were wiped out by a firestorm, without taking into account that embers and wind caused the firestorm, is a ruthless
contempt of our community,” a DPAG spokesperson said.

In August, the Chapman proposal was scaled back, with the number of dwellings cut from 29 to 20 and the site re-designed in a semi-detached configuration to fit in with nearby houses.

Other changes included retention of significant trees, on-site parking, garages instead of carports and a minimum six-metre setback.

However this failed to appease the opponents and the DPAG believes the Government is steamrolling opposition to the public housing proposal, despite the many objections to the development application.

“The development application closed on 24 November but already we have the Chief Minister saying on radio that the project was going ahead no matter what,” a DPAG member said.

Besides the bushfire risk, the DPAG believes the site, at the end of a bus route is inappropriate because there are no resources such as employment or community services nearby. It also is concerned at the loss of community land.

“The Government is gentrifying the middle of town, sweeping public housing up and plonking it out in the suburbs,” the member said.

The DPAG believes the Government is hell-bent on the project so it can benefit from the Commonwealth asset recycling scheme to fund the light rail project, and the move was a precedent that posed a threat to community land across Canberra.

Mrs Jones said Chapman residents felt ignored by the Government as it pursued plans to build public housing on community land regardless of the community’s concerns.

She said residents were concerned about the development’s location within a bushfire prone area, the size and density of the development, and the use of community land for public housing.

“They are frustrated because they feel the public consultation is a sham and that the Government will proceed with development plans regardless of their concerns,” she said.

“In fact, some of the most concerning aspects of the development were not open for discussion during the consultation process such as site selection, bushfire risk, or the appropriateness of using land reserved for community use, for public housing.

“It seems the Labor-Greens Government is determined to build public housing in Chapman regardless of the outcome of community feedback.”

Toby McLenaghan - 21 minutes ago
Peter Marshall well it will be better then before. 🚴🏻💨 View
Marion Rae - 8 hours ago
Election year in a bellwether seat View
Hope Marie - 9 hours ago
Grace Stefanac now I can't crash on it wow View
News 10