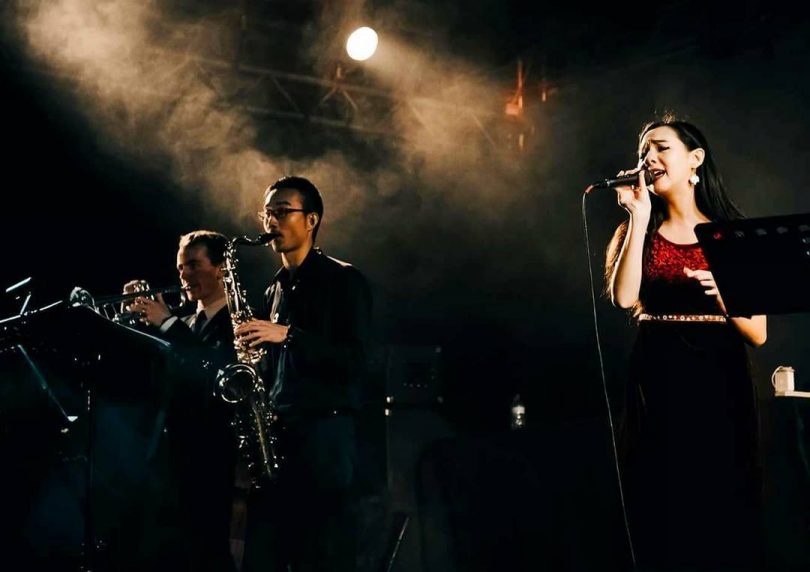 Caitlin Magee is forging a career as a session singer in Taiwan. Photos: Supplied.

It’s safe to say that life is pretty exciting for Caitlin Magee right now. In between trips to China to perform at luxury brand events, and holding down a residency at a Taipei music club, the singer is fast making a name for herself as a session musician and rising star in the music world.

It took a few attempts to match up schedules and time zones, but recently Magee and I caught up to find out what she’s been up to since leaving Canberra for Taipei nearly two years ago.

What was life like for you when you were living and studying in Canberra?

I’ve been pretty fortunate to have a pretty exciting life growing up in six countries due to my parents work, however we’d always move back to Canberra for a few years before jetting off again. Most recently I was living in Canberra whilst I was studying my Bachelor of Music at the ANU. During this time I was heavily involved in radio, volunteering at community radio, running the ANU radio station ‘Woroni Radio’ and also working for Canberra FM (Hit 104.7FM and Mix 106.3FM). Needless to say life was busy, during the day I would be attending classes followed by working at the radio station in some capacity, but I’d always find the time for a drink and to swing by local live music events.

What have you been up to since the move over to Taiwan? Has it all gone the way you expected?

The beauty of life is that it never ceases to surprise you! I originally moved to Taiwan to study Chinese and learn a bit about my culture (my mother is Taiwanese). During my time as a student, I began attending gigs and jam sessions, after a while I knew enough musicians to form a band. My band Ultrahang then entered the Taichung Jazz Festival band competition (Taiwan’s biggest jazz festival and one of the major Asian jazz festivals) and we unexpectedly won. This then catapulted me into being offered a music contract with an agency in Taiwan. Since then one thing led to another and I have been so grateful for all the opportunities that have come my way.

What does a typical week look like for you these days? Is there such a thing?

A typical week…hmm I don’t really think that exists for me! Being a session singer, there really isn’t a typical routine like get up at 8 am and head to work from Monday to Friday, however I do have a residency at a brand new livehouse in Taipei called SMEXY, which is the closest thing I have to a routine. Aside from that, in a given week I could have shows at events, weddings, hotels, TV recordings and festivals. Sometimes these events, particularly luxury brand events (since they have the budget haha), require me to travel all across Taiwan or China, most recently I was singing for Cartier and Tiffany & Co. I’ll also be constantly learning new material, arranging, teaching, rehearsing and auditioning. Most recently I’ve been working with a Taiwanese R&B pop star who has been mentoring me in hopes that I can work as a touring backup vocalist with him whilst developing my artist profile. 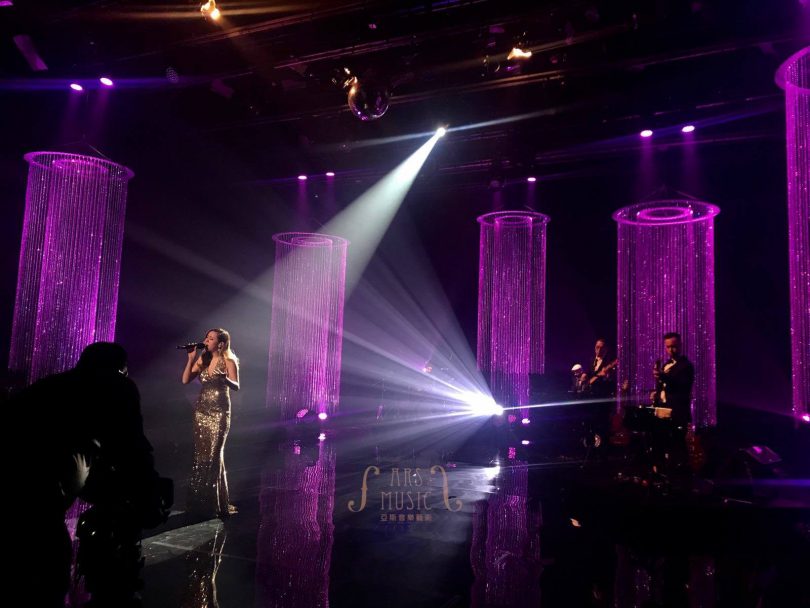 Caitlin Magee recently had the opportunity to perform on TV in China.

What’s been the most exciting moment so far, living and working over there?

I’d say the most exciting moment has been meeting music legends and getting to jam with them. A lot of big artists tour through Taipei and if I’m lucky enough one of my colleagues will tip me off about which jam or bar they are hanging out at. I met the Taiwanese R&B pop star at a bar and we ended up jamming, seriously you never know who is watching when you’re performing or who will be out and about. I’d say at the end of the day the best moment will always be winning the Taichung Jazz Festival since that pretty much gave me the chance to work here.

And what about the most challenging?

The most challenging thing for me is figuring out my schedule and learning to balance it. Working as a session musician you don’t really have a routine, it’s easy to lose track of time or put off work since the deadlines are usually flexible. Coming from a structured schedule and university, it was a bit of an adjustment and was initially difficult to motivate myself. Another challenging aspect has been the fact that almost all the work happens at night. Taipei is a city that never sleeps so there will be times where I’ll be heading in to sing or rehearse at 10 pm or jobs not finishing until almost 3 am! 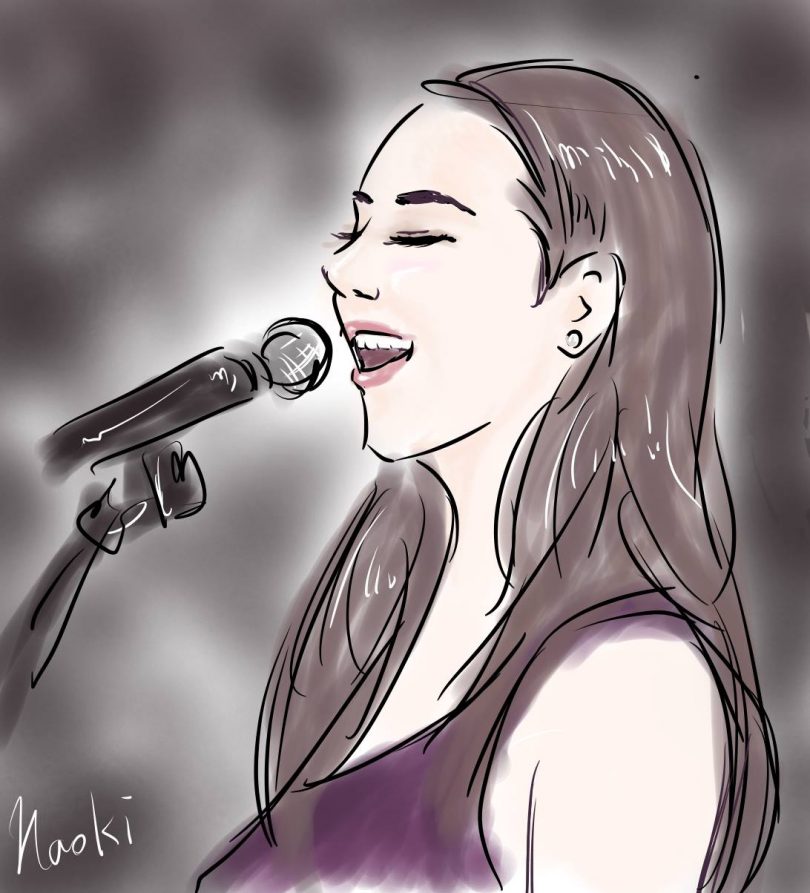 Her growing profile means that Magee sometimes receives artwork from fans, like this illustration by Hooki.

Was there anything you learned back here in Canberra that has helped you on your journey?

I’d have to say the majority of what I know about jazz and music theory comes from my study at the ANU. I’m grateful for having wonderful teachers back in Canberra and also to have got to jam with so many awesome musicians at the ANU, due to this I had such a solid foundation to build upon when I started performing in Taiwan. Also my music taste! A big thing that differentiates myself from the other singers in the Asian market is the western influence and approach that I have to music, mainly due to the fact my music education was from Australian teachers.

I plan to move back to Canberra in July in the hopes of finishing my Bachelor of Music at the ANU and get stuck into the local music scene. Back in Taipei, I was in a blues band called Muddy Wolfe, a joint project with Canberra guitarist Steve Smith, and we both hope to revive the project in Canberra.

Have you checked out Caitlin Magee on Soundcloud yet?

Shane Westmore - 28 minutes ago
Ch.9 are still stuck in the 90s & so are many of their viewers... it's like they want you to order Kayo View
Anthony Chase - 38 minutes ago
Its got little to do with football and everything to do with ratings. View
Marlene Valenzuela - 1 hour ago
Possibly not.... Not unusual!! View
News 5

ssek - 45 minutes ago
Road safety = We are seeking new revenue streams. Also amazing I never see these on anything but long straight bits of road,... View
News 9

James Manukich - 11 hours ago
Well Done 👌👌👌👌👌 View
Gary Hatcliffe - 13 hours ago
Wacky-doo! View
Nassim Rezakhani - 15 hours ago
Congratulations Jason!! One of the best agents around!! Thank you for the amazing auctions you’ve done for us in the past!... View
Sport 11

In a major coup for the ACT, Manuka Oval will host two limited overs internationals between Australia and India in...
Food & Wine 57

Civic will see new life breathed into it with the opening this Thursday (22 October) of the long-awaited Verity Lane....
Opinion 25

Bega singer-songwriter finds inspiration on the road from Eden

@The_RiotACT @The_RiotACT
The ACT has Australia's second-best performing economy according to CommSec, a result of stable employment and few cases of COVID-19 https://t.co/rAzcfDeDjI (30 minutes ago)