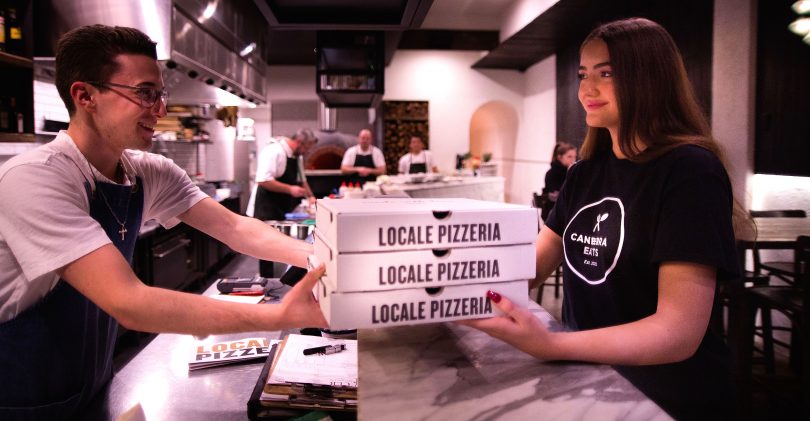 A Canberra Eats delivery driver picks up a pizza order from a local restaurant. Photos: Supplied.

As businesses re-emerge from their enforced COVID-19 shutdown, one business has found the best way to begin is through the bellies of Canberrans.

For Chris Hansen, building a business in just a week, has also helped keep many of Canberra’s best restaurants going at a time when they have been decimated by social-distancing restrictions.

Canberra Eats has already partnered with almost 40 of the best restaurants in Canberra to offer restaurant-quality meals that are delivered to your door.

The business has also created almost 20 new jobs for drivers, while also keeping chefs and restaurants with at least some income where there would have otherwise been nothing.

Mr Hansen said their business model is different from Uber and Deliveroo where drivers operate without benefits for as little as $12 an hour and don’t get paid if they don’t get deliveries.

“The hospitality industry has been decimated so to be able to actually create jobs for a lot of restaurant staff has been very satisfying,” Mr Hansen said.

“We made a conscious decision to employ drivers as PAYG wage earners on about $27 an hour which is the same sort of rate as other hospitality workers. Plus they get a 20 per cent loading on weekends and 41 cents a kilometre for petrol and they also get superannuation.

“We could have hired contractors but we didn’t want to take advantage of the situation and was also something that looked after people, particularly as the industry has had such a challenging time.”

Each restaurant that has signed up receives the evening’s orders by 5:00 pm each day and prepares the food with love and attention. The dedicated drivers, who operate in different zones, bring it to your door within minutes to ensure it stays hot. There is a $55 minimum order and a $10 delivery charge. 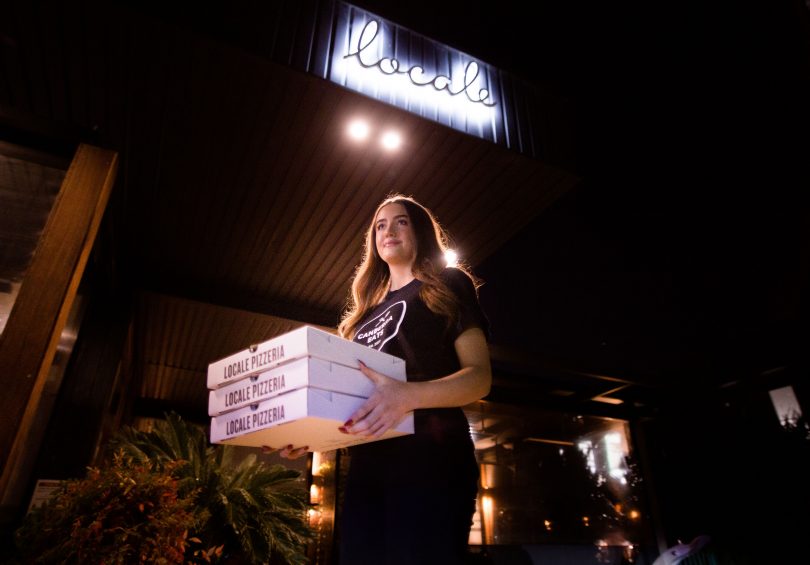 Locals supporting their local is the theme for Canberra Eats.

“As the business grows, I hope to employ more people and help give restaurants another stream of income as they re-emerge from the shutdown,” Mr Hansen said.

Mr Hansen is also a seasoned business owner in the industry, having started as a partner at Chairman and Yip in the mid-90s before running Cape Cod at the Deakin shops. He was also involved in the opening of Lanterne Rooms at Campbell and Ox Eatery at Griffith.

For the last couple of years, he has operated a hospitality recruitment business.

“If you’ve got a 100-seat restaurant, you don’t really make any money until you get to 80 or 90 people, and that’s been really hard for restaurants that are now operating at less than half their capacity, but they’ve still got to pay a full kitchen as well as rent.

“All restaurants are making a loss at the moment, so if we can help them make an extra $1000 or $2000 a week, it actually helps them survive,” he said.

He has also added a dinner party experience to his menu of offerings, where Canberra Eats drivers become waiters and deliver the full restaurant experience to your home.

“If people can’t get a table at a restaurant, or they are too worried about going out, we’ll bring the restaurant to them. We have five quality restaurants that we can bring to the customer’s house with a waiter who serves the food, tops up the wine and provides the full dining service you’d normally expect,” says Mr Hansen.

The next arm to the business is boardroom eats, where drivers deliver food as if it were being ordered from a caterer.

“You could ring a restaurant, but good luck trying to get them to serve you, so I’m hoping that boardroom eats will create another four or five jobs once it launches.”

Mr Hansen said all his drivers are high-trained hospitality staff who have lost their jobs or have since returned with reduced hours. He said 99 per cent of the deliveries have been on time in the three months the business has been operating.

His vision is that Canberra Eats will continue to grow even as restaurants resume full trade and that locals will support their local restaurant in new ways.

“I can’t imagine what it has been like to own a restaurant at the moment, as customers don’t realise what a brave face these restauranteurs are putting on. The pressure is immense and the margins are so slim, so any extra income is good income for them.

“I’ve had 90 per cent of restaurants come on board with us, and we’ve had to move pretty quickly.

“I feel that it’s unsustainable for other models like Uber Eats and the like, but that’s really designed for pizza and kebabs — we’re here to support the best restaurants in Canberra.”

TimboinOz - 15 minutes ago
I hardly ever use a cook-book, except to check amounts, temps and timing - IF I'm doing something new or new-ish. Anyone who... View
Community 62

Casey Jane - 23 minutes ago
Noni Evans I've see a few around the place on my runs! View
Noni Evans - 41 minutes ago
Casey Jane , found any yet? View
Lorraine Clements - 2 hours ago
Got some outside our place that I have put little jewels all over them. View
Opinion 141

Ian - 24 minutes ago
Fine by me to have as much motor sport as can be run so as to be financially self-sustaining, and no more than marginally dis... View
Capital Retro - 48 minutes ago
with an e-scooter as the safety vehicle View
Lucas Danes - 1 hour ago
Yes please and thank you very much. View
Community 6

Annie Tully - 55 minutes ago
Nice article 😊 View
Brian Lodge - 2 hours ago
Hi Susan how wonderful Congratulations to Mark and Coral , they were great neighbours (very caring) back at Tulla over the ye... View
Gail Tully - 2 hours ago
Thank you Amy View
News 19

@The_RiotACT @The_RiotACT
A #construction worker at a site that was listed as an exposure location says he didn't feel safe at work due to a lack of #COVID-19 safety protocols https://t.co/Gq8rRKGtox (58 minutes ago)