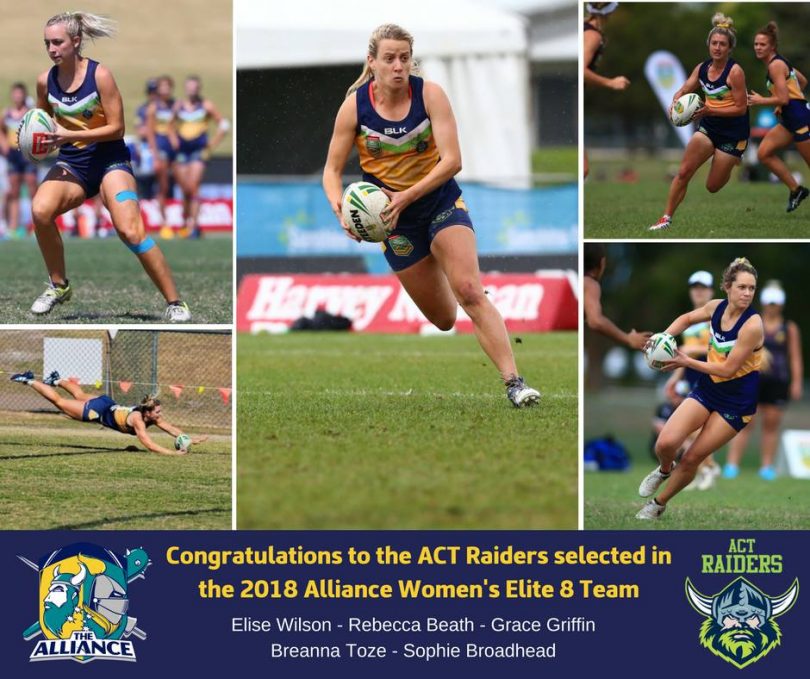 Five Canberra girls have been selected in the 2018 Alliance team which will compete in Touch Football Australia’s most elite competition, the Elite 8 in Coffs Harbour in March.

Breanna Toze, Elise Wilson, Grace Griffin, Rebecca Beath and Sophie Broadhead were selected as part of the Alliance team playing at the National Touch League on the 7 to 10th of March.

The Elite 8 competition consists of four NSW teams, three QLD teams and one Alliance team selected from the ‘Alliance States’ which include the ACT, Northern Territory, South Australia, Tasmania, Victoria and Western Australia.

Rebecca Beath has been part of the Alliance setup for the last six years, having been selected back in 2011, which makes her one of the more experienced members of the squad.

Beath believes that the 2018 squad is ready to make another run to the semi-finals and maybe go even further.

“Last year we had a bit of belief heading into the competition but we didn’t know how well we could do. This year is different because we know that we can make semis and go a step further and take that top spot.”

Breanna Toze only started playing touch in 2016 when Elise Wilson asked her to come play touch and one thing led to another. With a netball background, Toze finds that a lot of the skills translate across the two sports.

“A lot of the skills from netball translate well to touch, like the ball handling and the dodging. The hardest part to adjust to is the training outdoors,” Toze said with a laugh.

“It’s really good and I really enjoy it. It is the different environment and I am finding it really challenging but also a lot of fun.”

Toze, who will make her debut for the Alliance side, plans to continue balancing playing netball and touch football.

“I prefer touch now since I am doing better at it,” Toze joked. “I still play state for netball but I definitely put all of my energy towards learning and improving in touch footy.”

The five ACT girls travel every second week to either Melbourne or Brisbane to take part in the weekend training camps, where they train five to six times per day on Saturday and Sunday.

Elise Wilson, who has been a part of the youth national team since 2016, said she was happy to sacrifice other things to play touch.

“It comes with playing sport, you have to sacrifice time and money and it really isn’t an issue if you love the sport,” Wilson said.