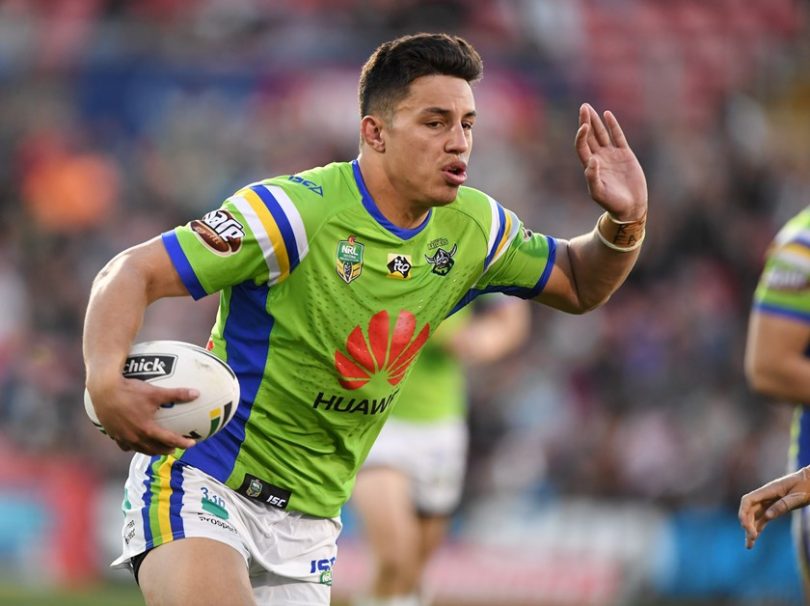 Joe Tapine has been a shining light for the Raiders in an otherwise dismal season. Photos: Supplied by Canberra Raiders.

They haven’t managed to beat a top-eight side all year but the Canberra Raiders will use a worthy cause as their motivation to instil some pride back in the jersey this weekend.

The Green Machine face the intimidating task of tackling top-of-the-ladder Sydney Roosters at GIO Stadium but insist they can cause one of the biggest upsets of the season on Sunday afternoon and will use the chance to raise awareness and money for autism as an incentive.

The Raiders’ slim finals chances were buried in last weekend’s loss to the West Tigers but Ricky Stuart has told his men they still have plenty to play for in the last three rounds, urging his men to put some pride back into the jersey.

There is no better time to do so with the Raiders set to wear jerseys designed by 10-year-olds Kayla Marlow and Neve Smith to support Autism Wellbeing and the Ricky Stuart Foundation this weekend.

Backrower Joe Tapine said the season had been a tough learning curve for the entire team but said there is plenty of motivation for the last three matches of the season.

“Not making finals is hard for us. It was a big goal for us at the start of the year and we didn’t achieve it,” Tapine said.

“The boys are tough on themselves and we know we have let a lot of people down but we have to come out here and try our hardest the next couple of weeks. We need to prove a lot to ourselves and the community in the last couple of games and use these games as a building stage for next year.

“Canberra always comes out and supports us and we need to turn some of these games into wins for them.”

The chance to raise awareness and money for families struggling with autism is close to Tapine’s heart, with the 24-year-old New Zealand international surrounded by friends and family struggling with the condition.

“There are a lot of family members and close friends who have children with autism that I know, so this is a big match for us,” he said. “We will go hard for Stuart.” 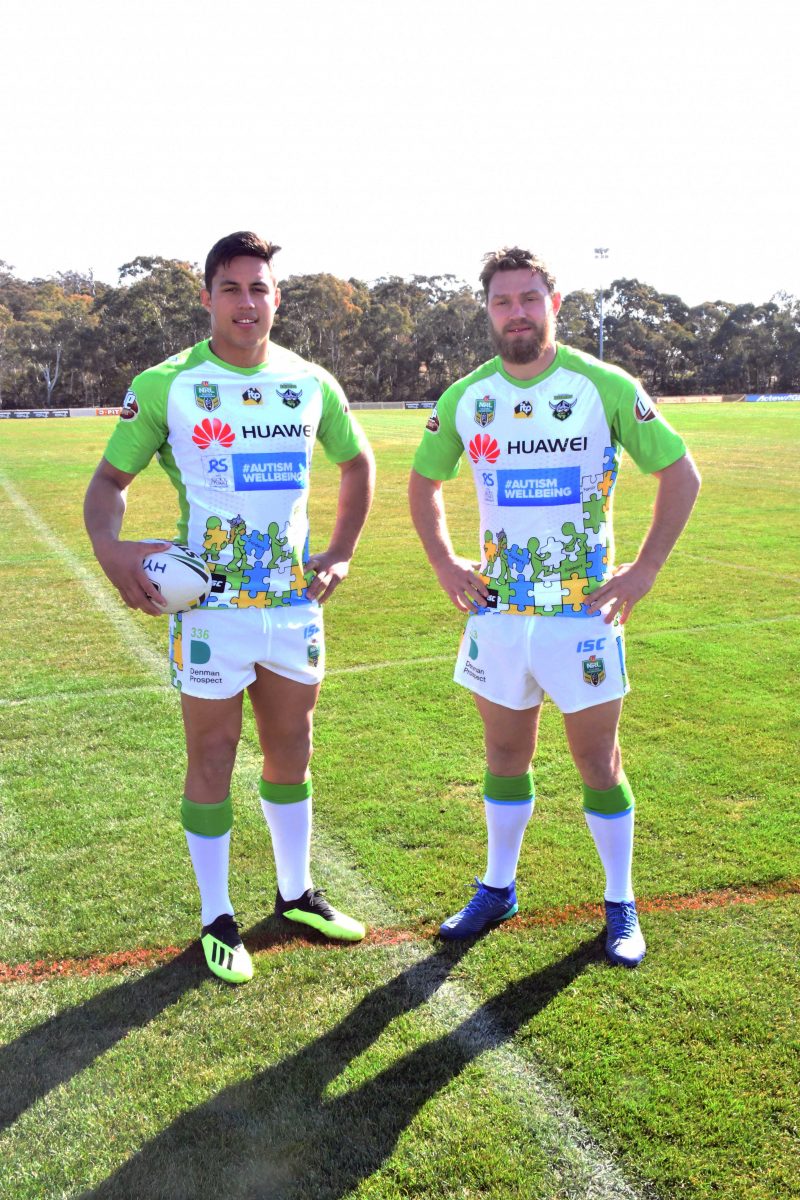 For the third consecutive season, the Canberra Raiders major sponsor Huawei will forego their usual place on the front of the Raiders jersey, in order to raise awareness for Autism Wellbeing and money for the Ricky Stuart Foundation.

Last year’s equivalent game day promotion raised over $41,000 through match-day fundraising initiatives and an online jersey auction and the Raiders are hoping to exceed that amount this season.

Stuart, who is also director of the Ricky Stuart Foundation, thanked Huawei for their continued support of both the special matchday and the jersey initiative.

“Huawei has shown continued and sustained support for the Ricky Stuart Foundation over a number of years and to have the Foundation and #AutsimWellbeing message feature on the Raiders jersey again this season is a wonderful way to showcase this support,” Stuart said.

“It’s gestures and fundraising like this that have helped us to open the second respite care facility here in Canberra in the Emma Ruby House, and we can’t thank them enough for their continued support.”

The match worn jersey’s will once again be auctioned through Allbids post-match.

Chris Hobbs - 8 hours ago
Time will tell. If they are pragmatic and able to adapt their ideologies to actual plans and policies, it will be an interest... View
David Brown - 10 hours ago
They got disaffected votes from people fed up with both majors. If the Libs can find a moderate leader and develop some sensi... View
HiddenDragon - 10 hours ago
Most of what we've seen from the ACT Greens in the last few terms of government has been fairly standard stuff from the polic... View
Property 37

Capital Retro - 8 hours ago
One comment on this thread was the Australian Electric Vehicle Associate has given advice to the ACT govt. on its policy that... View
Heavs - 11 hours ago
Five superfluous words in that last sentence. View
JC - 12 hours ago
What policy? Always trying to make a political point. What’s clear is you don’t know much about electronics and electrica... View
News 1

russianafroman - 11 hours ago
Terribly underfunded. Around Gungahlin it's hip height. There should be double or triple the amount of mowers. It's not justi... View
News 32

Michael Hourigan - 19 hours ago
Except that it doesn't Joe View
Lloyd Woodward - 1 day ago
Stop with this boomer thing. Im apparently a Boomer, but think this is a great idea. He is just a sad Panda.... View
News 1

awc73 - 20 hours ago
Imagine if the ACT government could provide 24/7 public access AEDs to all residents and visitors. No need to bang on the doo... View
Property 8

Nick Sifniotis - 21 hours ago
I want this View
News 15

Michael Weaver - 23 hours ago
Ack was my go-to for anything in Moruya as a sports journo. Fitting tribute for a great bloke! View
News 10

ACT Policing has a blunt warning for e-scooter users: be an idiot and you will face the consequences. With e-scooters...
Opinion 27

@The_RiotACT @The_RiotACT
Miss the music: the @CBR_Symphony will be back in 2021 with a new team, old favourites and fresh Australian works. Check out the program https://t.co/rdarOqWtAd (9 hours ago)

@The_RiotACT @The_RiotACT
Art deco elegance and century-old charm are back in Kingston with the opening of Queenies Bar and Good Times https://t.co/svCAn3flWd (10 hours ago)

@The_RiotACT @The_RiotACT
The Oaks in Woden is the ideal property precinct for Canberrans to use the Federal Government's HomeBuilder grant to their advantage https://t.co/70jE9wSTeR (11 hours ago)