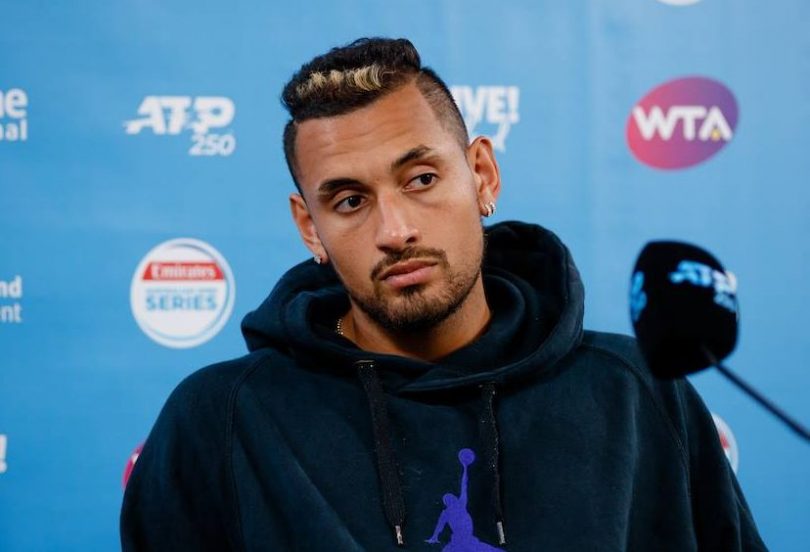 Nick Kyrgios established a supportive initiative to give to others during the COVID-19 shutdown. Photo: Supplied.

The social media images of Canberra basketball star Patty Mills playing requests on his guitar, or Nick Kyrgios offering to home deliver food to those doing it tough is just the tip of the iceberg when it comes to engagement with fans during the shutdown of sport.

Mills, who lives in Texas, not only plays quarantine request songs on his guitar under the #thrillswithmills handle on Twitter, he also provides healthy living tips, suggesting fresh natural products and limited processed food as the best option, while at the same time encouraging people to stay home.

Well, the point of this game is to hopefully put a smile on peoples face and share the love & positivity through music while being responsible and staying at home.

So I hope this ones does it for you because “music heals all souls” – Emma Deigman #StayAtHome #ThrillsWithMills pic.twitter.com/3Qk1yFUvgp

On his Facebook page, Kyrgios has offered to home deliver food to anybody doing it tough

“Even just for a box of noodles, a loaf of bread or milk, I will drop it at your doorstep, no questions asked,” he posted.

Eight-times World BMX and Mountain Bike champion Caroline Buchanan offers regular healthy eating and exercise tips to her many followers on social media, often demonstrating her own exercise regime at home, as well as responding to questions posted to her.

The Raiders and the Brumbies have also upped their engagement during the shutdown with players proactively using social media to communicate with supporters.

The Raiders, although still posting their regular podcast, have introduced a new offering with players answering questions from members. On Monday, you can get to know Josh Papalii a bit better.

The Brumbies have also increased their social media content as a means to stay connected with fans. Lachlan McCaffrey hosts a segment with the running title of Locky’s Lockdown in which he interviews his teammates while at the same time answering questions from the public.

Capital Football issued a social media challenge to followers of the code to post a football photo each day. They are also hosting online coaching workshops.

If nothing else the shutdown has proven that sportspeople and sports in Canberra are more than capable of innovating to remain engaged and relevant while no sport is actually taking place.

There’s also a chance that the new methods of engagement will continue once the shutdown is over and we are once again participating in, and watching our favourite sports.

I don’t know about anybody else, but I’m really not missing these sports stars at all. I was a bit upset when COVID-19 started that sports events had all stopped, but as isolation has dragged on we haven’t heard about nightclub incidents, sex scandals, temper tantrums and all the rest. By being taken out of circulation, the publicity stunts have completely stopped and we’ve all had a welcome break. When COVID-19 ends I would imagine that the monetary value of these sports stars has been cut considerably as it is painfully obvious that they need us far more than we need them.

I don’t think it would be popular with the voters if governments were seen to bail out these businesses masquerading as professional sports people.

Wouldn’t it be great if there was a return to amateur sports? We could have a local RL competition with teams from Tuggeranong, Weston, Gungahlin and Queanbeyan participating. That would pull the crowds.

Just shows how irrelevant celebrities and sports stars are, they have zero value in the real world.

Sonja Eldridge - 48 minutes ago
Congratulations to all the winners esp my friend Wendy Beckingham!... View
News 14

chewy14 - 60 minutes ago
Wait, So you think a government retrospectively changing legislation to prevent a development is a reasonable example of poor... View
JS9 - 5 hours ago
True, but it should also be remembered that prior to the government taking a relatively extraordinary step of legislating to... View
News 18

Jeff Smith - 1 hour ago
Did you know the small Taylor public Primary school in Kambah is above capacity whilst the nearby combined Primary & High sch... View
Kathy Sepulveda - 3 hours ago
Jessie Nicho I'm a little late to this but I agree with you 100%. All the money is going into the Northside Public Schools an... View
Business 23

Lynda Galt - 2 hours ago
Good luck it will be great for Yass View
Lyn Smith - 2 hours ago
They'd better! It would be great to see this restored! View
Neil Thompson - 6 hours ago
Andrew Turnbull, great bloke to get on the piss with as well. View
News 53

Maya123 - 2 hours ago
More realistic of them to accept that climate change is happening and not ignore the research of those working in the field a... View
Jo Hann - 3 hours ago
Christopher Stuart Veilands how do they brainwash kids in schools when they've never been in government and have no say in th... View
Jo Hann - 3 hours ago
Robert Harrop how does a party that's never been in government have enough control over schools to brainwash the children in... View
What's On 1

Lucas Hayden - 3 hours ago
This is one of the best facilities ive ever seen...... I am not a "horse" person but I almost became one just walking around... View
Sport 2

Trish Casey - 4 hours ago
Mark Parton has helped age care and those with disabilities living in ACT housing more than anyone .we have had 3 break ins t... View
Mark Parton MLA - 5 hours ago
It’s my job to help constituents and It’s my job to hold the government to account. I’ll continue doing both. View
Capital Retro - 6 hours ago
Nailed it. View
News 2

Robyne Mitchell - 5 hours ago
How many years have they been promising this? View
Opinion 63

Steven Campbell - 5 hours ago
Reducing posted speed limit is simply government’s way of running away from their responsibilities. Laws are only as effect... View
Opinion 73

Capital Retro - 6 hours ago
Spot on. What goes on behind the scenes is usually at odds with the "clean & green" propaganda we hear. Just like a wind "far... View
show more show less
*Results are based on activity within last 7 days

GRAPHIC CONTENT: Please be aware some readers may find this court report highly disturbing. A Canberra boy, not yet 16-years-old,...
*Results are based on activity within last 7 days

@The_RiotACT @The_RiotACT
The Budget is good news for public servants with more than 5,000 jobs forecast https://t.co/lNV4sUmYUB (1 hour ago)

@The_RiotACT @The_RiotACT
Canberra's nurse of the year has been named. Find out how she and her team stood tall as the Weston Creek Walk-In Centre became our frontline during the COVID-19 pandemic https://t.co/KgHd7NHC9V (2 hours ago)