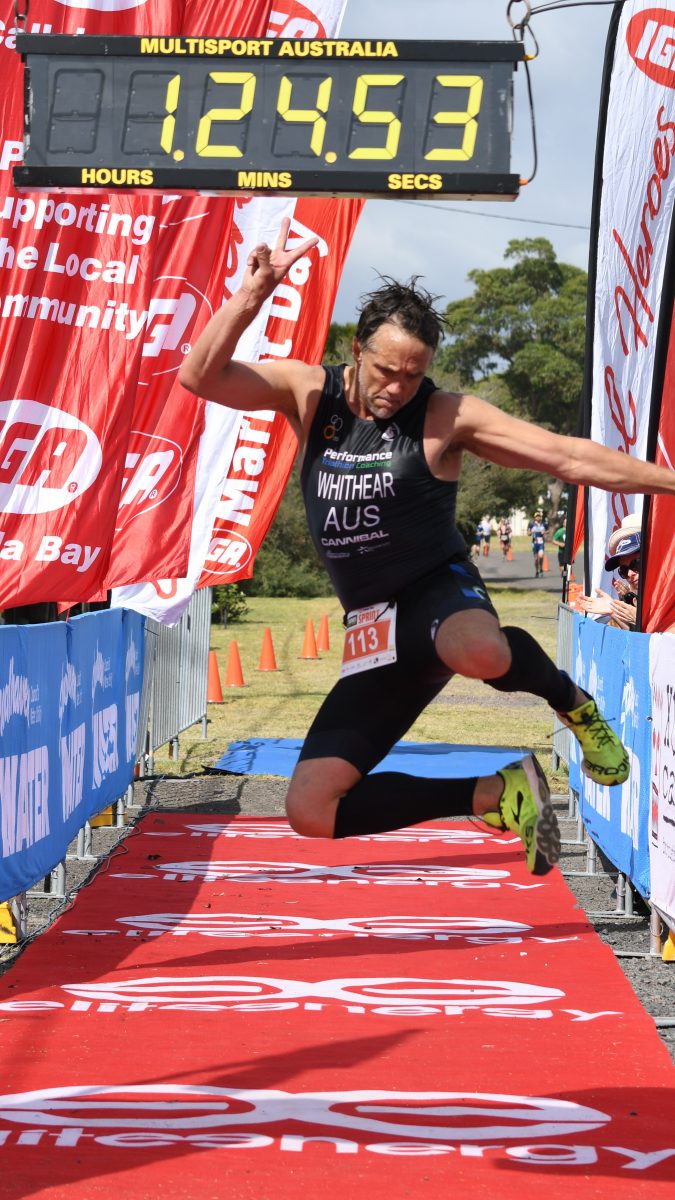 Just over two years ago Mark Whithear was fighting for his life after crashing into a kangaroo while on a training ride on the Stromlo Forest Park Criterium Circuit.

It left Mark with six back fractures, two fractures of his skull and brain swelling.

By his own admission, despite his injuries, it could have been worse.

“I was lucky. I had a former nurse cycling behind me as well as my training partners. Their actions saved my life.”

That was on 27 February 2018. He spent the next 12 months recovering from his horrific injuries.

A year ago I wrote about his survival and the impact it had on his life.

Another 12 months down the track and he says the prospect of coming back from his injuries and representing Australia for a second time in the age group World Triathlon Titles was vital to his recuperation.

He set out to qualify for this year’s World titles in the 50 to 55 age group set down for Edmonton in August. With the help of coach Megan Hall and psychologist Gayelene Clews, he set a number of goals.

“In the recovery phase you need some goals. I used the three qualifying races for the 2020 World Championships as my motivation.”

He finished third, fourth and twelfth in those races. It was enough to ensure his selection in the Australian team.

“I was surprised to be selected because I didn’t think I deserved it because I was slower than I was before,” says Mark.

At this stage it would appear as though his recovery was complete, reaching his goal of making the Australian team.

But along came the COVID-19 pandemic and his dream was placed on hold as the 2020 World Championships were cancelled.

Not to be deterred, Mark has now re-set his goals to make the team for next year’s World Triathlon Grand Final in Bermuda.

Selectors won’t be making triathletes who qualified for this year’s Worlds go through the same process, but there is speculation they will have to compete in one qualification race to ensure their place in the team.

“I have been focused on my building business during COVID,” says Mark, “But I will ramp up my training in September.”

As to the campaign to build a barrier around the criterium circuit at Stromlo to stop the kangaroos coming onto the track, Mark says, “there needs to be a fence around the course and we’ve asked the ACT Government about this”.

The only visible sign of action is the construction of larger signs warning of the dangers of kangaroos on the course.

Sean Kinmonth - 7 minutes ago
I thought the ACT had the second cheapest supply due to 100% renewables. Only Tassie had cheaper due to hydro. From what I re... View
Sean Kinmonth - 18 minutes ago
There is a risk with every power source. The link is particularly biased and tells half truths and should be discounted as be... View
dulynoted - 4 hours ago
the electricity market in australia seems rigged, we pay way more for electricity than other countries with similar generatio... View
Sport 4

Gassed - 3 hours ago
Shame I thought they were going to sell actual chilli's not just sauces... View
Brisal - 9 hours ago
I can't wait to check out the new store! View
Food & Wine 50

@The_RiotACT @The_RiotACT
Can you have a rewarding career and live regionally? @allinsure’s newest senior account executive Sarah Townsend says yes, you can https://t.co/6wZv0NBaEG (47 minutes ago)