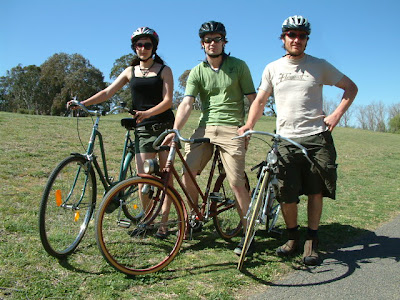 Yesterday morning marked the first ever Canberra Vintage and Classic Bicycle Ride, held by the shores of Lake Burley Griffin.

Mrs Brown and myself decided to pop down to the starting line to see if I could find anyone else with an interest in the wacky English Raleigh Chopper.

We found that the ride was the brainchild of Trevor Shone – a vintage bicycle enthusiast who organised the ride to help ‘protect our cycling history’ by bringing collectable bike owners together to talk, swap and ride pre-1985 bicycles.

(Slideshow and more below)

I became so involved in my trip down memory lane that the next time I looked around there were at least 150 – 160 people gathered, each with their own lovingly restored or proudly battered and rusty beast.

There were plenty of standouts such as Alex Oshea’s Green 1949 Malvern Star and Anton Wurzer’s ‘Lennie Racer’ tandem – modified of course to carry a small child as a stoker. There were a range of English 3 speeds, early 80s BMX bikes, even two orange speedwell GTS’s, complete with hydraulic brakes.

Trevor hopes that the event will grow to become an annual gathering to raise money for charity including a swap meet, the social ride and other activities. By the size and enthusiasm of the crowd, he is well on his way to achieving his dream.

Unfortunately for me there were no Raleigh Choppers. Mrs Brown was happy – our garage is packed as it is.

and this is on again this year?

JB, I know nothing about the ‘bent in the pic, but would note that the basic two-wheeled recumbent design has been around since the 1930’s. There were very few commercial manufacturers till the (maybe) late 70’s when one or a couple of American (I think) companies started building them. Anyone remember that 1983 movie (thanks, IMDB!) Mindstorm? Christopher Walken had a recumbent lowracer in it (an Avatar 2000, circa 1976 for the nerds :-))

I don’t know much about bicycles, but your articles are always very interesting to read. It looks like a really good day.

Old Peugeot!! Sweeeet. I want one.

Oh Glory!! I was hoping to bust out my old Peugeot but a bung ankle restricted my bikeridership yesterday.
Well done to the organisers, cant wait to go to the next one.

I was wondering why I was seeing trailers full of really old bikes passing me on the weekend.

I thought it was throw your old bike out day free at the tip or somthing!
That would have been good to see if I knew it was on.

I’m sure I saw a recumbent poking its nose out in one of those shots.

Tony Kingston - 2 minutes ago
I find it interesting that we have road rules and licenses to keep attitudes and opinions out of traffic. But egos often take... View
Peter Groves - 4 minutes ago
Don’t know how to turn a corner without drifting two lanes over. Can’t indicate intention, can’t maintain taillights. O... View
Brian Lockley - 5 minutes ago
I find your report concurs completely with my own beliefs. I'm an Accredited Driving Instructor and extremely proud and honou... View
News 9

Lisa Morr - 15 minutes ago
Tom Leahey duh! they want more votes View
Joey Mann - 12 hours ago
Tom Leahey they don’t want to lower the voting age below the age of criminal responsibility, what are you on about View
News 8

Karl Edmondson - 58 minutes ago
If only they ate mice. View
Lewis P Owlay - 4 hours ago
I believe you mean the Delta Myna View
Lyndsey Simcoe - 5 hours ago
Graham Hatch see! They are psychos! View
Sport 4

Patty O'Brien - 1 hour ago
Rhys Spannari Joel Spannari View
Carlie O'Shea - 3 hours ago
Kristy Keft is this your pub you rave on about? 😂 buy it View
Ben Lindsay - 3 hours ago
Neil Willis could almost walk to work from your joint View
News 15

DrLin - 2 hours ago
Foresight serves you well, I received notice yesterday of a 12% increase to the price yesterday. View
Property 12

John Moulis - 3 hours ago
They must have a lot of pull. Even people on Sydney's upper North Shore who want to remove trees which are blocking the view... View
Pam Dovey - 3 hours ago
Margaret Hunt did you see this? View
Run_W - 3 hours ago
Wasn't this the Club that was complaining last month about being broke and if someone put planes on the lake it would mean th... View
News 12

Ben Johnston - 12 hours ago
"In a 50-minute ministerial statement this morning (22 June), Business Minister Tara Cheyne told the Legislative Assembly tha... View
summs - 14 hours ago
At least 15% of the budget went to 19 (2%) businesses whilst 23% of the businesses received less than $50? Was the scheme int... View
Motoring 3

David Hennessy - 14 hours ago
Wish they were as quick to fix the problems in the CTP system for pedestrians and cyclists who are damaged for life but have... View
show more show less
*Results are based on activity within last 7 days

Motorists involved in collisions with vulnerable road users may face a specific charge and much stiffer penalties if convicted under...
Opinion 82

@The_RiotACT @The_RiotACT
RT @HandmadeAust: We are very sad to announce that we need to postpone this weekend’s handmade market. This is not a decision we have made… (19 minutes ago)

@The_RiotACT @The_RiotACT
If you use your phone and drive you will get caught, Transport Minister Chris Steel said after new laws allowing mobile detection cameras in the ACT passed the Legislative Assembly this week https://t.co/zYUIF8PzLk (2 hours ago)