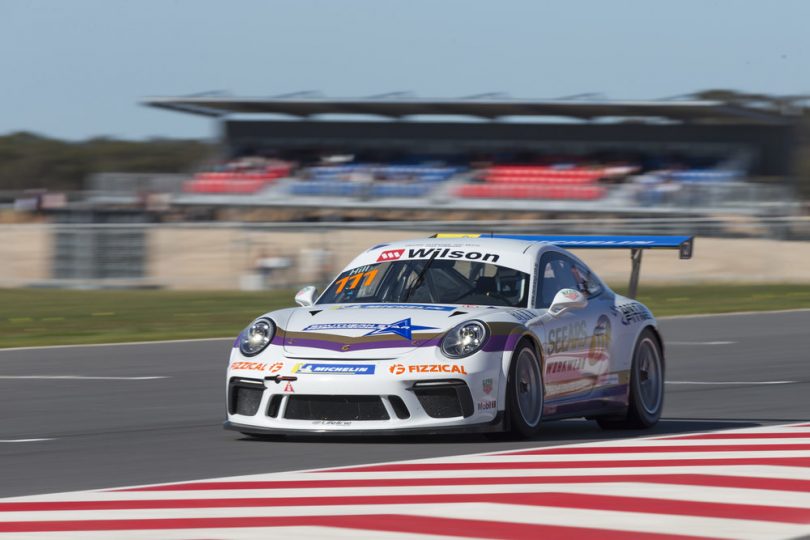 Cameron Hill, at 21 years of age, has already proven that anything is possible, and of course, it does require a certain amount of parental support.

Such is the determination of Cameron’s parents, Colin and Helen. They have thrown virtually everything they possibly could into his quest to become a champion racing car driver.

When you look at the costs associated with running a car in the Porsche Carrera Cup series, you will never complain about a hike in junior sport registration fees again.

For starters, Cameron had to buy the car to compete in the series this year, that was a lazy $360,000, then there is the ongoing running expense of around $200,000 a year.

There was an added expense this year after Cameron stalled at the start in Round 2 in Melbourne. He was rammed from behind and the car had to be rebuilt, at great cost, in time for Round 3 a month later. 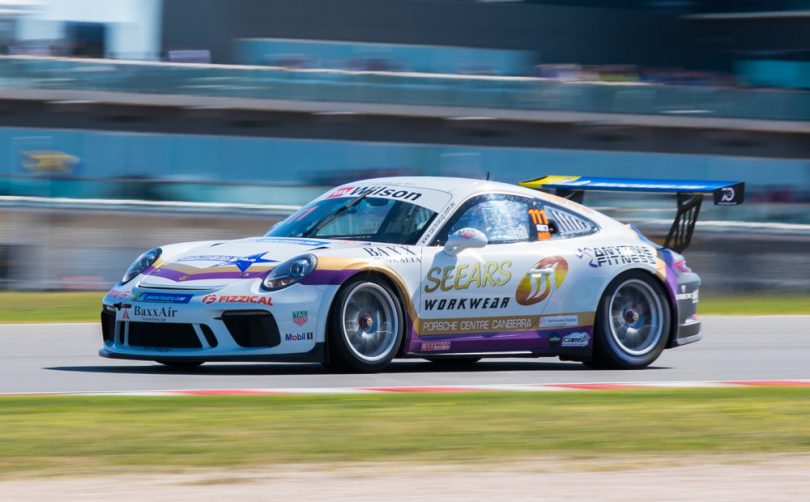 Cameron is the only privateer in the series. There is no factory backing with his father, Colin, servicing the car and getting it to the grid week in week out.

This small team from Canberra is competing against much larger teams with far bigger budgets. After six rounds he is in 11th place overall, but he is making up for lost time after the disaster in Melbourne.

To keep the team afloat amidst rising costs, Cameron also runs two cars in the Australian Formula Ford series with two drivers; a 15-year-old and a 16-year-old. They are effectively paying customers and they help bankroll Cameron’s campaign in the Carrera Cup.

Cameron says he is keen to continue in the series next year with the hope that he will win his way to compete in Europe.

It’s been a huge step this year after success in the Formula Fords and the Toyota 86 series. He is now racing against seasoned professionals. Five drivers in the series have competed in Super Cars, and it is regarded as one of the most competitive seasons in memory.

To be 11th with two rounds to go is no mean feat, even more so when the odds are so heavily stacked against you.

Ali Light Alasady - 47 minutes ago
Tani Buist LEGIT HOW LONG HAVE WE BEEN COMPLAINING ABOUT THE IDIOTS ON THE ROADS View
Jon Rooks - 54 minutes ago
Kathleen Julia Gill. I see both. The problem with these online debates is people keep making blanket, patently nonfactual sta... View
Forde AE - 1 hour ago
100 percent spot on. View
Breaking 15

Acton - 1 hour ago
Agree. Its broken. The only people who deny its broken are those whose powers of critical thinking are seriously deficient. View
Acton - 1 hour ago
The more we hear, read and know about AstraZeneca, in Australia and overseas, the more reason there is to hold off until Mode... View
whatwik - 2 hours ago
FWIW, wife woke next day after her first AZ with a fever and headache - responded very well to a Nurofen and a Panadol, and t... View
Opinion 13

Brindie - 2 hours ago
Given that our main roads are so congested (Tuggeranong Parkway; Adelaide Avenue) and that our public transport system is so... View
Ol L - 3 hours ago
Canberra. If the traffic gets bad just put in more traffic lights, that’ll work real good…..check out Hindmarsh Drive Phi... View
Deepak Ramanath - 4 hours ago
James Forge Wow, where is this? View
Food & Wine 10

@The_RiotACT @The_RiotACT
ChooseCBR data reveals that some businesses processed more than 500 vouchers in the 25 hours the scheme ran, and almost 40 per cent of the vouchers were claimed at stores like grocers https://t.co/vVrNddImTH (19 minutes ago)