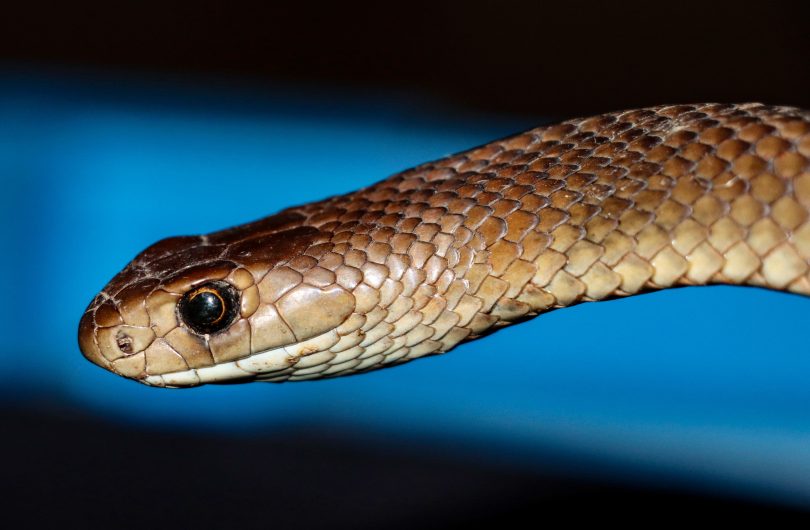 The eastern brown is the most common snake species in the ACT. Photo: Canberra Snake Tracking Project.

As the daylight begins to last longer and the first blossoms pop out, there’s another sign from nature that spring is on the way: snakes.

The first snake of the season was an eastern brown (Pseudonaja textilis) caught in Yarralumla on 10 August, making it the earliest on record for Canberra.

The slithering, cold-blooded reptiles emerge from their winter hidey holes in search of warmth and food, but Alex Borg from the Canberra Snake Tracking Project says a mild winter and an early spring are clearly bringing some out early.

“We aren’t entirely surprised that some snakes were active for a short time, with bright sunshine and ambient temperatures hitting approximately 15 to 16 degrees Celsius,” he said.

“Our tracking work reveals that one of our research snakes in the Mount Taylor Nature Reserve recently moved around 240 metres from one hibernaculum to another. That said, some of our other tracked snakes have not moved burrows or been active since April – one of the reasons why it’s tricky to make hard and fast universal rules about these guys’ behaviour.

“We have caught other snakes earlier in the year, but these were ones that were disturbed during excavation or construction work. This one was actually moving around to get some sun and sniff out some food.”

Alex and his Canberra Snake Tracking Project colleague, Gavin Smith, can tell when snake season begins each year because the number of calls to catch them from residents increases. 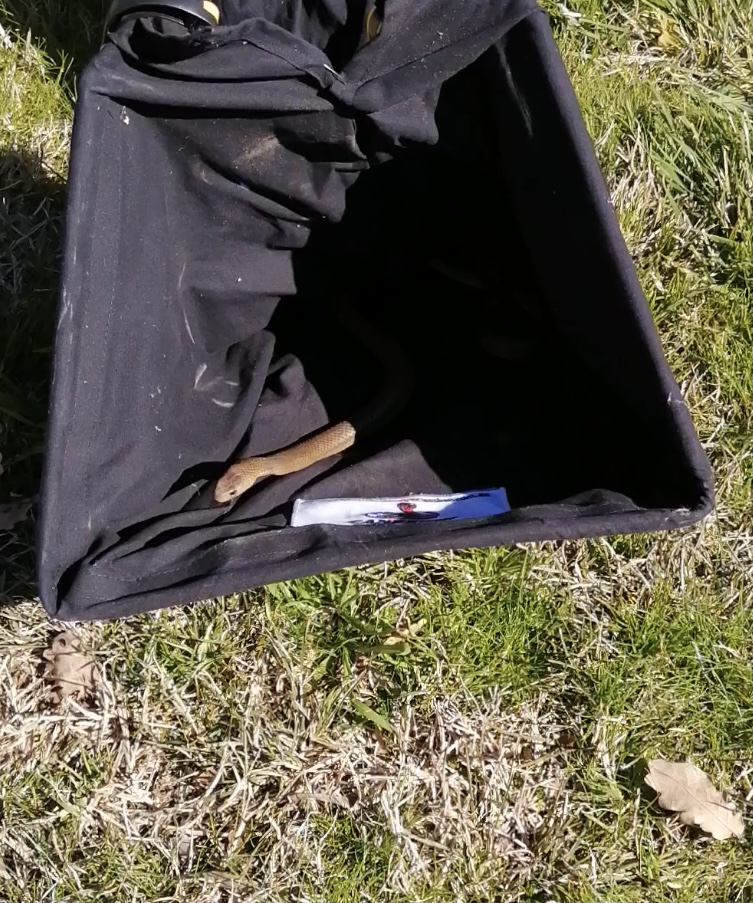 This eastern brown snake was caught while out for a slither in Yarralumla. Photo: Andrew Pratt.

The large ones are taken back to their facility, where they are measured and weighed, fitted with a tracking device, and released back into the wild.

For the smaller snakes, Alex and Gavin record various biological measurements and microchip them. Then, if they are re-caught at some future date at another location, they are able to determine how much they have grown, and compare the growth rates of males and females that have been released into different habitats.

“Taking scale clippings and putting the microchip in them is a bit of a stressful event [for the snakes],” says Alex. “But we try to make it as quick and as stress-free as possible, and then swiftly release the animals back into appropriate habitats in as optimal conditions as possible.

“Today is a bright and sunny day so we’re going to release her so she can go out and find a new hole to live in.”

Alex and Gavin began the task of tracking Canberra’s snakes because they wanted to know what happens after one is caught and released into a different habitat.

“What do they do? Where do they go?” says Alex. “Is it genetic diversity among the individual populations in Canberra that we’re potentially mixing up? Are we doing the snakes a disservice by catching them and moving them too far away, potentially giving them a death sentence?”

The duo has gone on to bust plenty of myths surrounding snakes. 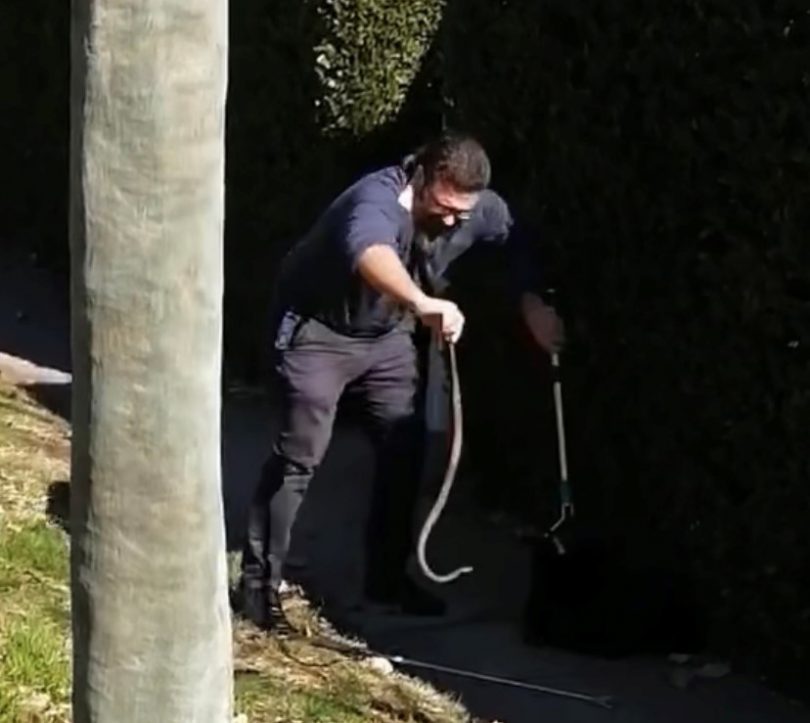 “We’ve caught snakes, relocated them two kilometres away and then in a matter of weeks they’ve travelled back to where we’ve caught them,” says Alex. “We’re called out to catch them again, and then they might return to the same street, but not the same house.

“This is bad news for the house owner, but good news in that the snakes have evolved to live with humans because we’re dirty creatures and we attract mice, and snakes love mice.

“A widespread perception is that snakes in Canberra disappear entirely over winter, but this isn’t always the case for every snake. While it is certainly uncommon to discover brown snakes out and about this time of year here, if the environmental conditions are right, some may intermittently appear to bask or to complete short journeys from one burrow to another.”

Alex says snake numbers during the years have been fairly steady, with only mild fluctuations.

“Similar to last year, snake season might start early, but it might finish earlier as well,” he says. “We have very human perceptions of what the seasons are, but the animals go off different signs. They’re so in-tune to little things that we don’t fully understand yet.

“We definitely need to learn a lot more from them – things that could help humans with crop plantings and so on.”

When I was 18, I joined the Army. In our first aid lessons, a recruit asked the instructor, ‘when do the snakes come out?’ His response, ‘1st January to the 31st December.’ I will always remember that

Jason Daniel need to be careful with the wood 🪵

Roberta Gerber no thanks!

Lucky we didn’t see one yesterday down near the river. Paul Hamilton I wouldn’t have even thought they would be out yet

When we had a brown snake in our backyard (in November several years ago) we were told not be concerned, “it is just passing through”. ‘Oh good’, we thought.
‘Hey, wait a minute!’…

How come they aren’t locked down?

🤬 hate snakes 🐍
Definitely lock me down! I’m staying indoors until next winter 🥶 hahaha

Not worried about snakes, I got swooped by a bloody magpie 2 weeks ago!

Tsk tsk, snakes should respect the lockdown too! 🤣

It hasn’t been a mild winter -it’s one of the coldest I’ve experienced -we had one morning when it was minus 6 -lowest in about 30 years!

My electricity consumption tells me how cold it has been this winter and it’s the highest it’s been for 10 years.

Capital Retro, It’s not so much the temperature this year, but that it has rained much more than usual and we have had less sun to warm our houses.

Interesting to look at those records. So the coldest coldest day was -10 in July 1971 and the warmest coldest day was -3 in August 1988. So the range of coldest days is 7 degrees, which means that a coldest day of -6 is right on average. It has been wetter and cloudier this winter, so we just feel colder. We actually feel warmer on a colder day when the sun is shining.

Megan Donaldson, at least I will miss the snakes this year 🤣🤣

Megan Menz they’ll still be around in Oct/Nov 😆

Megan Menz we could drop some off to you….. 😂

Megan Donaldson maybe I should stay a bit longer 🤔

Neenie Baines oh now that would be fun, I’m sure I wouldn’t be the only one running out of the building 🤣

He’s getting his one hour of exercise. Let him be 👍

Lisa you’ve been out and about

Chara Reynolds AHAHAH an actual description of me 😂

Big spider in house in Kambah 🙀 no I didn’t release it back into the wild! 😙

Jules Hohnen We sure are 🙂

Is getting acclimatised to the climate change, climate 😂

Michael Long great to know, when was this mate?

Gavin Smith Saw a big one near the new works on Trebuchet last Friday and the crew saw 2 others earlier on in the week.

Global warming, told you so.

They’ve lived here longer than we have.

Richard Bush I saw that the other day thought of you, my verdict stay in hibernation 🤣

What about all the reptiles in parliament house….

Anthony they all ran home.

You mean the reptilians they shot through

Ozi Cavusoglu-Rucinski the guy who caught it said it was the earliest he’s ever seen them out! 🤭

I would have thought that the currently nice weather and the wild abundance of mice around would have something to do with it.

Well it’s not exactly the first swallow of spring, but ok

Hayleigh Aleksandra Alysha Olsen Tamara Tremble ..I will not be walking mt taylor until next winter haha x

Jo Solomon Just stick to the paths during the warmer months and always have a compression bandage on your person! 🙂

Gavin Smith I am terrified of them lol, I’ll pass !!!

Hints of it in the article.

Snakes are best relocated in a sub-divided state. 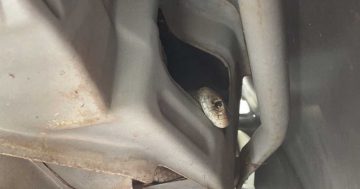