Caught on the hop by COVID-19 travel restrictions 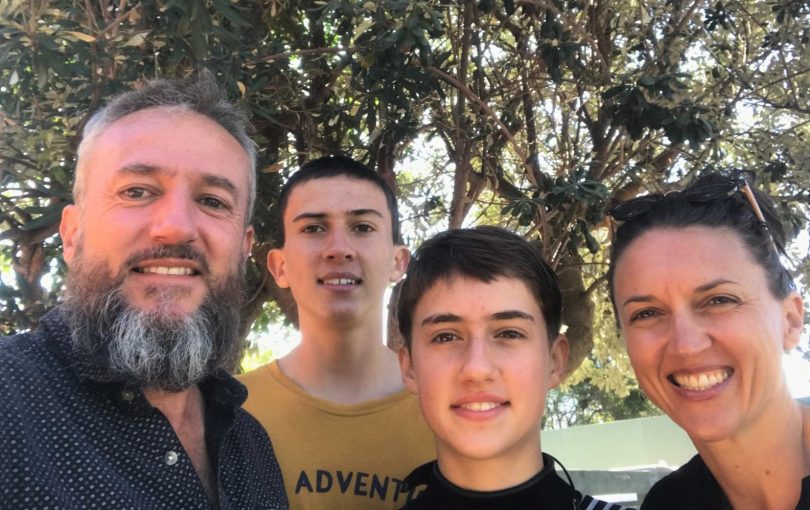 The White family – left to right: Steve, Finn, Emily and Rita – have had their travel plans scuttled by COVID-19 restrictions. Photo: Supplied.

The year 2020 seems to be when we have realised we’re not actually in control of anything and that plans for the future are just cool ideas that may or may not ever happen.

Take Rita and Steve White, who, along with their two teenagers, Finn and Emily, had planned the trip of a lifetime, which was supposed to begin the same week COVID-19 travel restrictions came in.

“We sold our house in Cairns and took long-service leave from our jobs as teachers,” explains Rita. “We were planning on going from my birthplace in England back to Steve’s birthplace in Sydney without flying, including riding bikes from France to Hungary on the EuroVelo bike trail.”

Although the family have lost most of what they had already invested in the trip, including hours organising Russian visas, Rita says they are just thankful they didn’t get caught out by COVID-19 while they were on the road.

“I don’t regret selling the house or leaving our jobs for a while,” she says. “I have been teaching high school for 16 years and was totally burnt out.”

“My hair was falling out!” she laughs. “We needed this time to reflect… and sleep.”

Rita admits she and her husband are usually always looking towards the future.

“We’re planners,” she says. “It’s almost an obsession but we’ve learnt not to plan through this experience. Now we try to talk about plans and always end with, ‘But we don’t know, so right now let’s have another cup of coffee!'”

English-German traveller Julia Berger has also been caught out by COVID-19 and is marooned in Bega until travel restrictions ease.

Julia spent last year working in outdoor education programs in the Bega Valley and when her travel visa ran out, she got a job in New Zealand, where she was established with a room and a car.

But when New Zealand announced it would close its borders in late March, she made the snap decision to return to Australia on a tourist visa so she could self-isolate with her new boyfriend.

“I have a work visa in New Zealand until January next year and a car and all my stuff is there, but I had only recently arrived there so I didn’t know many people,” she says. “I have more of a community here in Australia so I decided at the last minute to come back.”

Now Julia is spinning her wheels, unable to work in Australia and at risk of her three-month tourist visa running out while the lockdown is still in place.

“I could go home to Germany but I haven’t lived there for seven years and the virus has been so bad all over Europe,” she says.

COVID-19 hasn’t specifically changed her plans, which were fairly loose, but it has complicated them by restricting where she can go.

“I needed to figure out what I wanted to do next anyway,” muses Julia. “Go back to university, or keep working, but where? And then there’s this new relationship…”

The White family and Julia are just a sample of people on the move who have been caught out during this social upheaval without a solid home to return to.

“For us, it’s been great family time,” says Rita. “We’ve been bored more in the last month than we had for years before that. We’ve all had to learn tolerance, too.”

Rita has entertained herself by learning how to cut hair.

“I watched three YouTube videos and now I’m an expert,” she jokes. “I’ve cut the kids’ hair, plus Steve’s and one of my sister’s kids. All with a beard trimmer!”

Julia has taken up baking, but says she feels the pressure to be doing more.

“I think we’re trained to always progress,” she says. “I don’t want to feel I’m wasting my time. I’d like to be working or studying but I just can’t at the moment. I don’t know what’s going to happen next.”

The Australian government recommends all international tourists return to their home country as quickly as possible, particularly those without family support. For more information, see Staying in Australia during COVID-19.

We had 6 weeks planned for September...USA & Europe. No chance now. Fingers crossed we get there sometime next year.

Jane Farrugia ok thanks for letting us know.

A month in Utah, Arizona and Nevada on Harleys. The only refund we didn't get was our deposit on the Harleys. Very lucky and have a great travel agent.

I had a short trip to Fiji booked for May, I’ve got about half my money back so far but I’m resigned to the fact that I won’t be going overseas this year. However I am hoping that domestic restrictions will be eased sooner rather than later so I can at least do a road trip to see friends and relatives

We had a trip to Fiji cancelled too. Fortunately have not lost any money, it’s all on hold. We have been going to the same place every year but will go back in 2021. The loss of the tourists will be hitting the locals who work in the resorts very heavily

Anne Gallagher I got my hotel money back but my airfare is with Virgin. I hope to go next year but with the ways things are now the money is probably needed elsewhere

Salima Haidary - 17 minutes ago
Christine Moulet their food is cold every time I go there now. And it seems they pre cook a lot of their dishes. The service... View
Maria Greene - 35 minutes ago
We went to one in Melbourne and the food was terrible and service weird. They may have difficulty getting staff during covid View
Carmel McDonell - 48 minutes ago
Thai Herb -second that!!! View
Community 6

The RiotACT - 53 minutes ago
Judith Winter Hi Judith, if you head to their Facebook page tagged in the caption you will be able to contact the Red Hatters... View
Judith Winter - 57 minutes ago
How do you become a Red Hatter in Canberra? View
News 9

Thai is one of my favourite cuisines to cook and eat. Fresh humble ingredients perfectly balanced to achieve harmony between...
Community 11

It's the week before the national holiday that causes division across the country, so it wouldn't be right for me...
Opinion 64

@The_RiotACT @The_RiotACT
The Rotary Aussie Peace Walk is on 27-28 March and organisers are calling on people to take the challenge and enter a team https://t.co/tBOGiThELs (45 minutes ago)

@The_RiotACT @The_RiotACT
A former speechwriter for Charles Perkins and a former staffer for Christine Milne will fight the next federal election for the ACT Greens https://t.co/Stan0SQMlP (2 hours ago)

@The_RiotACT @The_RiotACT
Businesses in Queanbeyan's industrial area are being urged to be aware of toxic runoff and not drain the health of local waterways https://t.co/Kvn264mwjs (3 hours ago)