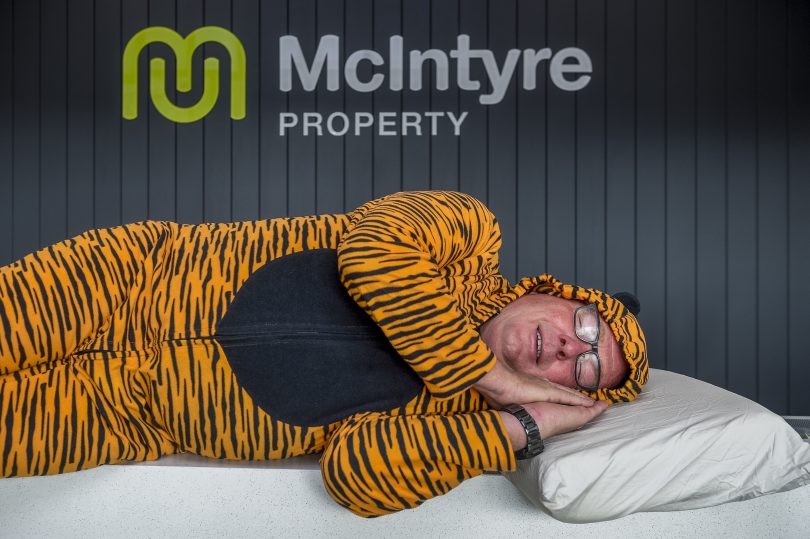 Col McIntyre, of McIntyre Property, knows no matter how he dresses he won’t be warm during the CEO Sleepout. Photos: Supplied.

No matter how cold he gets or how much he shivers, Col McIntyre of McIntyre Property won’t be complaining the night of Thursday 20 June. Instead, he’ll be reminding himself that life could be much, much worse.

For the third time, Col will rally together with other leaders from business, community and government to help end the pain of poverty by taking part in Canberra’s CEO Sleepout.

Celebrating its 10th anniversary, the 2019 event will be held for the first time in a hangar at Canberra airport where it’s frequently colder than other parts of the capital, and where the constant noise of planes and trucks and crew won’t make life any easier.

“Bunking down in a sleeping bag on a piece of cardboard isn’t fun as the temperatures dip through the night, no matter how rugged up I am or how much hot soup I drink,” says Col. “You get cold to the bone, but it’s only one night. I return to my warm home and comfortable bed the next night. Those who are homeless and sleeping it rough don’t have this privilege. They struggle with cruel Canberra winters for months on end.”

Working in real estate, Col understands the importance of ‘home’. He participates in the CEO Sleepout knowing how important community support is to breaking the cycle of inter-generational poverty, homelessness and disadvantage. 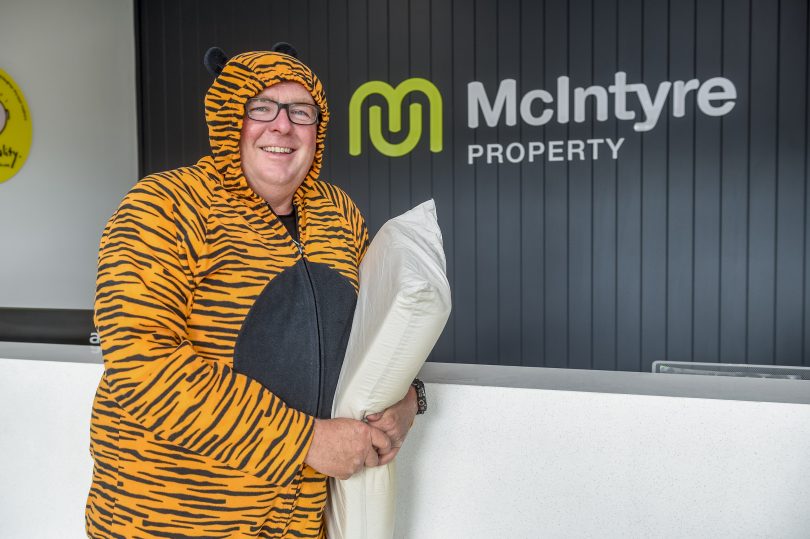 “Canberra is an affluent city, but we have people who really struggle, which is something we shouldn’t ever be complacent about,” says Col McIntyre.

The St Vincent de Paul Society runs the CEO Sleepout nationally. Canberra organisers hope this year’s event will have a record number of participants, aiming for 200. Organisers are also aiming to smash the record for the amount of funds raised, with a goal of $700,000, after last year’s record figure of $629,000.

“Like Col, some other participants return year-after-year with a strong connection to the cause,” says Barnie van Wyk, CEO of St Vincent de Paul Society Canberra/Goulburn. “While sleeping out for one night will never be a true experience of homelessness, it’s a chance to gain insight into the realities of what it’s like to sleep rough, and learn how Vinnies can help break the cycle of poverty.”

Homelessness rates in Australia continue to rise, with the 2016 census showing a 14 per cent increase since 2011.

Recent figures from the 2016 ABS Census of Population and Housing show that 351 Canberrans under the age of 24 years are without a home. Single people of all ages sleep rough in the ACT, and so do some mums and kids.

Funds from the ACT CEO Sleepout support Canberrans who don’t have a home to call their own and who can’t afford basics such as food, hot drinks, clothing, and blankets. In part, funds will support the St Vincent de Paul Society’s Night Patrol vans, with volunteers also providing companionship and a way to connect with other services.

For Col, participating is part and parcel of his broader belief that businesses have a responsibility to give back to their communities. He and his wife Jo, co-owner of McIntyre Property, do so in many ways, supported by their staff. That includes supporting charities, schools and local sports teams.

“Ever since we opened the business in 2007, we’ve done well,” says Col, who has won Sales Agent of the Year for two years and Property Management Team of the Year. “From the get-go we have worked with the community. We depend on the community for business and have a desire to give back.

“Canberra is an affluent city, but we have people who really struggle, which is something we shouldn’t ever be complacent about. The CEO Sleepout is about those much less fortunate than anyone who works in our business. I applaud organisations like Vinnies for putting in such an effort to organise the event.”

Registrations for the Vinnies CEO Sleepout are now open at http://www.ceosleepout.org.au

You can also donate to Col McIntyre’s fundraising efforts.

ChrisinTurner - 26 minutes ago
Living in the inner north we now have to start planning to leave Canberra during SummerNats. Already the mufflers are being r... View
Opinion 12

jwinston - 31 minutes ago
harcm said “tim_c – what a load of rubbish you talk. What if your schooling was completely disrupted by domestic violence... View
Acton - 50 minutes ago
The money you are giving out of misplaced guilt to a street beggar is just funding their drug, smokes and/or booze addiction.... View
Mike of Canberra - 2 hours ago
So the problem with Jobseeker is that it’s insufficient for its recipients to live on. Well guess what folks - it’s not m... View
Community 140

Bill Gemmell - 37 minutes ago
Barbara Eglitis I was wondering how long it would take. Seriously, I had the Fowles St Park project in Weston in mind. Sugges... View
Barbara Eglitis - 43 minutes ago
Naturally occurring weeds, like the ones growing down the middle of Northbourne Avenue which looks disgusting??? View
Mark Slater - 58 minutes ago
Angie Drake The simple answer is, buy more mowers or employ more staff. It's not hard. View
Public Sector 172