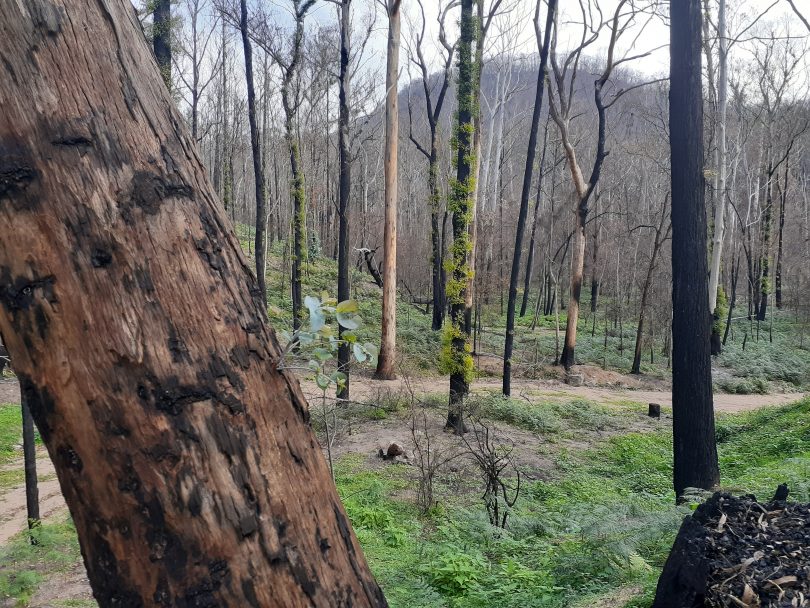 As the rugged terrain regenerates, bushfire victims return to their land to rebuild and are considering the next fire. Photo: Elka Wood.

People who have lost homes to bushfire this year are now facing a ticking time bomb. Most insurance companies cover rent for a year of temporary housing, starting from the day of the fire, but five months of that year has already passed and many sites are only now being cleared of debris, leaving a shrinking window for rebuilding.

A group of bushfire victims in the Bega Valley has banded together with Melbourne-based modular construction company Atomic 6 with the aim of being housed on their land by the end of 2020.

“We are dreaming of having a permanent structure on our burnt land in Yowrie when our insurance-paid rental runs out on 31 December,” says Felicie Vachon, who has spearheaded the idea locally.

“With the Atomic 6 project, we could be on our land, in an off-grid house with solar system, wastewater management and water catchment for a reasonable price in less than a year,” she says. “But to do that we need others to join us. The power of this project is in numbers.”

Atomic 6 CEO Andrew Lennox was in Cobargo last week and met with 12 households who are interested in the project, including Harry Binnendijk and partner Lena Kuppens, who lost their house, studio, workshop and sheds in the New Year’s Eve bushfire.

“At first, we thought about living in a caravan on the land and rebuilding, but after talking with people who have done it, we realised we could still be in the caravan in five years,” he says. “The reality of building is different to the dream. Now we just want something quick and Atomic 6 is offering that.”

Although Harry and Lena have a rental home for the winter, he says being without a home “throws your life upside down”.

As well as being sustainable, permanent, customisable and factory assembled in as little as two weeks, Atomic 6 homes are fire-resistant.

“It’s not really flames we’re worried about, it’s heat,” explains Andrew. “The fire that went through Cobargo created temperatures of up to 2000 degrees so we’re testing our building material under sustained high temperatures.”

The houses can also be equipped with heat-sensing sprinklers and shutters for windows and doors.

Harry says after losing everything in a fire, it feels like there are two options for rebuilding: build something super simple and cheap that you expect to burn, or invest in technologies that will help the house survive the next fire.

“The windows are obviously a weak point,” says Harry. “We’ve been talking with a builder in Cobargo, Steve MacDonald, who says we can have shutters that we hang before evacuating instead of having them permanently visible. It’s a good compromise.”

Atomic 6 is keen to employ local contractors where possible and Andrew has put plans in motion to lease a factory somewhere near Batemans Bay to begin putting together the homes.

“We want to create the best chance for people to come home to a house when this happens again,” says Andrew.

The Atomic 6 team is providing free support in the planning and permission stages because, says Andrew, this is where many people get held up, including architectural drawings, surveying, BAL assessments, septic permits, application forms and lodgement, and liaising with local councils.

“The intent is to combine resources to tackle the planning and consulting en mass to gain better outcomes for very little cost,” says Andrew. “It’s the solution to the question of, ‘Where do I start?'”

There is no obligation on residents to continue using Atomic 6 after the planning stage.

“A quotation will be done on an M2 rate/formula and in situations where a property is underinsured, Atomic 6 will seek assistance on top of our own contributions to narrow this gap,” says Andrew.

People often think of modular homes as temporary accommodation, but that is not the intent with these homes. The basic structure is streamlined to keep costs down but the homes can be customised.

“We are very keen to have a home again,” says Harry. “We’re happy to make it our own on the inside and pour our energy into the gardens and landscape instead of building.”

Andrew, who says the women of Cobargo are “driving everything”, says he saw in the eyes of the people he met this week a desperate plea not to let them down.

“My biggest fear is letting down these people,” he says. “But we’re doing it [the rebuilds] anyway because we had to do something.”

If you live in the Bega Valley or Eurobodalla Shire and want to replace a burnt building, visit Atomic 6.

One Response to Cobargo bands together to rebuild sustainable, fire-resistant homes
Filter
Showing only Website comments

Great idea. About time people built fire proof homes in fire prone areas. They should have been building these years ago. I hope the insurance companies give a reduction for houses built to withstand fire.

Lucas Hayden - 26 minutes ago
This is one of the best facilities ive ever seen...... I am not a "horse" person but I almost became one just walking around... View
News 17

Kathy Sepulveda - 35 minutes ago
Jessie Nicho I'm a little late to this but I agree with you 100%. All the money is going into the Northside Public Schools an... View
Sport 2

Trish Casey - 1 hour ago
Mark Parton has helped age care and those with disabilities living in ACT housing more than anyone .we have had 3 break ins t... View
Mark Parton MLA - 2 hours ago
It’s my job to help constituents and It’s my job to hold the government to account. I’ll continue doing both. View
Capital Retro - 3 hours ago
Nailed it. View
News 2

Robyne Mitchell - 2 hours ago
How many years have they been promising this? View
News 13

Steven Campbell - 3 hours ago
Reducing posted speed limit is simply government’s way of running away from their responsibilities. Laws are only as effect... View
Opinion 73

Capital Retro - 3 hours ago
Spot on. What goes on behind the scenes is usually at odds with the "clean & green" propaganda we hear. Just like a wind "far... View
George Watling - 11 hours ago
These things also generate vast amounts of e-waste and carbon pollution. Studies show they last about 9 months before they ar... View
Business 21

Neil Thompson - 3 hours ago
Andrew Turnbull, great bloke to get on the piss with as well. View
Trevor Hicks - 4 hours ago
About time 👍 View
Jess Puddick - 5 hours ago
Kimberley love it, so excited for it to be restored! View
Opinion 11

George Watling - 11 hours ago
These multi title trojan horses are cropping up all over Canberra. Developers are trying it on in Holder and Weston and other... View
Opinion 94

George Watling - 11 hours ago
Marc Edwards Spot on Marc. The best way to deal with congestion is decentralize workplaces. If everyone is travelling to a ce... View
show more show less
*Results are based on activity within last 7 days

@The_RiotACT @The_RiotACT
Captains Flat Road will get a much-needed $10 million upgrade over the next four years as part of a capital works program in the Queanbeyan-Palerang area https://t.co/2zPIjg1tc5 (3 hours ago)