Looking to get fit?
Sign up to play tennis today 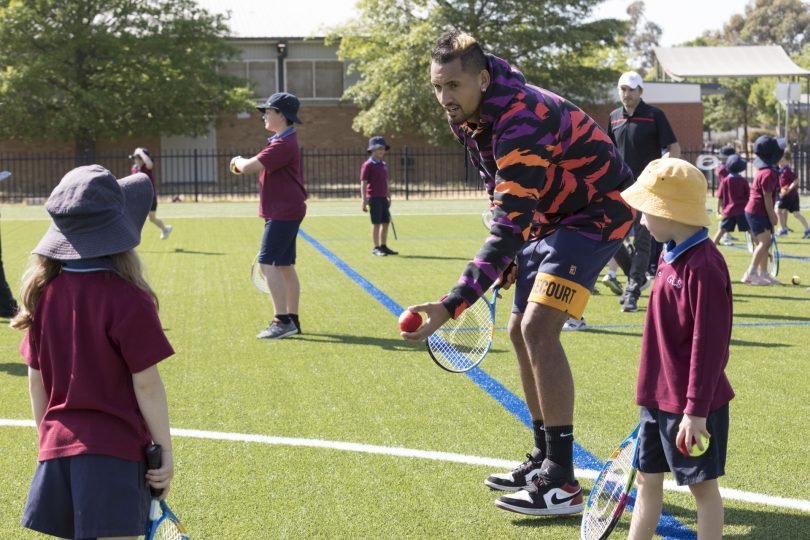 The undersupply of tennis courts in Gungahlin could be a hindrance to finding the next Nick Kyrgios. Photo: File.

There are fears tennis is approaching a critical point in the ACT as a chronic undersupply of courts denies the community a valuable resource and even hampers the emergence of the next Nick Kyrgios.

Despite being one of the fastest-growing regions in Australia, with nearly 85,000 people calling it home, there isn’t a single community tennis club in Gungahlin. But planning is well underway on a proposed new 12-court facility to make sure tens of thousands in the community have the opportunity to play.

Kim Kachel from Tennis ACT is with Tim Gavel to kick off this week's sports wrap. They're talking about the campaign to get community tennis facilities in Gungahlin and how you can help by completing a quick online survey. Click to hear Tim's take on all the latest sporting news from around the grounds – it's proudly brought to you this week by Snedden Hall & Gallop.

In the past 15 years, 30 tennis courts have been lost across the ACT while the last completely new facility, The Pines Tennis Club in Chisholm, was built back in 1986.

After bushfire smoke and COVID-19 forced the cancellation of the summer and autumn leagues respectively, community participation is at record levels this winter with a 47 per cent increase in the number of teams taking part in the Canberra Tennis League.

Over 5,000 students also play tennis at Gungahlin schools but the lack of nearby facilities to transition to when the time comes means many could be lost to the sport.

“It’s of critical importance to grow participation and make sure those kids and everyone in the community has access to a tennis facility and can continue in the sport. Where there are facilities, you see great participation,” Mr Kachel said.

“The ACT has proudly batted above its average producing top players. Nick Kyrgios, Charlie Camus, Alison Bai and Annerley Poulos have all recently come through the system. We’d love to be able to offer all the kids in the Gungahlin region an opportunity and a pathway to stay in the sport and aspire to reach the next level.”

The community’s response has been overwhelmingly positive and it’s hoped the health benefits of a new facility will see more rally around the proposal.

With social distancing becoming the new norm, tennis also offers a safer environment for interaction and exercise in comparison to other sports.

“The community are right behind this; there’s a lot of support out there for tennis,” Mr Kachel said.

“There are many benefits in terms of health and wellbeing – particularly mental health with everything that is going on.”

A message from our CEO, Kim Kachel regarding an exciting opportunity for the Gungahlin Region.

All residents in the Gungahlin region are encouraged to join the discussion, via a short online survey, regardless of their level of involvement or playing ability.

“It’s important for the whole of the ACT and region to establish a footprint for the sport.

“It’s a critical infrastructure project that will create jobs in the short, medium and long-term and provide a stimulus and boost for the economy,

“There will also be economic benefits from it because it will allow us to host bigger events here in the ACT.”

The Tennis ACT survey can be completed here and takes around two minutes.

Good article and I totally agree. We badly need a new club tennis facility in Gungahlin. Now a large area with 85000 people and just a couple of courts available. A new facility would be great for the community and for the sport.

jwinston - 1 hour ago
I wholeheartedly agree with your summation here Chewy14. This is a bit off subject but I’m very interested in the comment y... View
keek - 2 hours ago
I think you believe light rail to be a far bigger election issue than it actually is. I've found that outside of here, very f... View
Community 13

Ol L - 2 hours ago
Brindabella s? Would look like nothing recognisable as there hardly the Himalayas View
Capital Retro - 24 hours ago
".... An emblem showcasing medieval queens, crowns, and castles, doesn’t represent 21st century Canberra..." We have all th... View
Stephen Saunders - 1 day ago
Symbols do matter. The British monarch is the white hereditary chief of the Church of England. An emblem showcasing medieval... View
Food & Wine 1

TimboinOz - 14 hours ago
How to spend money, in public? AKA Konspikewus Konsumption. Look at ME!!!!! YAWWWWWWrrrrm. Build a veggie garden, grow your o... View
Food & Wine 1

chewy14 - 15 hours ago
BJ, You aren't meant to bring these things up. The only information allowed is positive. It's efficient, it's modern, it's vi... View
chewy14 - 17 hours ago
JC We don't need news reports, transport Canberra publish the patronage reports. BJ's figures are accurate. https://www.trans... View
bj_ACT - 17 hours ago
Just for the record, the light rail business case for expected daily patronage was quite low in 2019 and we beat that in the... View
Property 6

Someonesmother - 17 hours ago
Gee why does this not surprise me? Look who the developers are. 43 car parks in a completely congested street, using Canberra... View
News 17

JC - 18 hours ago
China may well be a developing country with many that are very poor. It does however have a massive (millions) middle to uppe... View
keek - 20 hours ago
Nobody held a gun to the Chancellors head and said "You must rely on income from foreign students and expand to a level where... View
chewy14 - 23 hours ago
JS9, Whilst I would agree that the Federal government has set the framework and playing field that the Unis are operating in,... View
News 4

Chief Minister Andrew Barr has floated the idea of the ACT receiving one flight of international students for every repatriation...
*Results are based on activity within last 7 days

@The_RiotACT @The_RiotACT
A review of the Family Violence Act 2016, released this week after a year's delay, has recommended amending the definition of family violence to cover technological abuse, coercive control and cultural abuse https://t.co/C4YxcJgVKv (1 hour ago)

@The_RiotACT @The_RiotACT
Two things became clear this week - the light rail wars are over and this is a federal election year, says Ian Bushnell https://t.co/lejP33tCdl (4 hours ago)

@The_RiotACT @The_RiotACT
The Mile High Club, Canberra's newest nightclub, launches this Friday and Saturday with @snkysndsystm. The owners promise it'll take your night out to the next level https://t.co/reaRBNujl1 (14 hours ago)