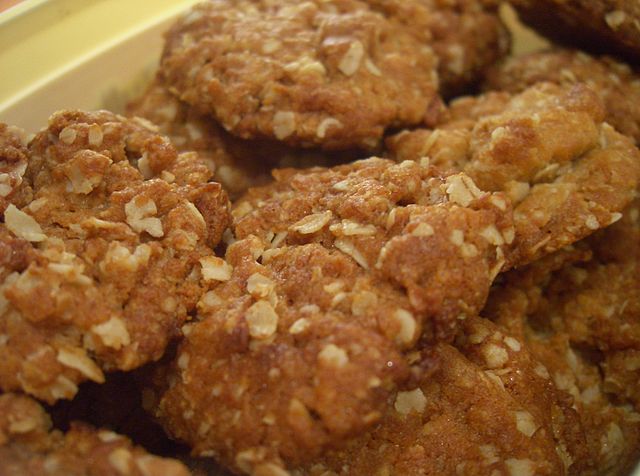 Anzac biscuits are a home-baked staple in many Australian kitchens. Photo: File.

Food and memories go hand in hand: Easter eggs, the Christmas ham, the Sunday roast and at the end of April, the Anzac biscuit.

Made with ingredients that sit in most kitchen cupboards (including the perennial tin of golden syrup, used for no other reason), Anzacs are redolent of home and the simple joys of life: oats and butter, golden syrup and coconut.

Most of us know the legend: baked to sustain the troops overseas in WWI with homegrown Australian goodness, the biscuits swiftly entered national folklore.

The first printed recipe didn’t actually appear until 1920, although the biscuits are first mentioned in print in Melbourne’s Weekly Times in 1919 (soldiers at Gallipoli actually had hardtack biscuits in their rations, which were anything but a sweet treat).

But there’s plenty of substance to the tradition.

The Australian War Memorial tells the story of Lance Corporal Terry Hendle, who received a tin of homemade Anzac biscuits from his mum while serving with 6RAR in Vietnam. But he was wounded and died before he was able to open the tin, which went home to his family in Queensland.

His sister kept the tin, with a painted image of the Opera House, for the rest of her life and every time she moved house, she would carefully carry ‘Terry’s biscuits’ in her lap to her new home.

Anzacs are a variation on traditional oat biscuits and older recipes vary significantly. There are differing amounts of flour, sugar and golden syrup; some use lard rather than butter and even include an egg. The dispute about coconut is enduring, but most modern bakers find its sweetness indispensable as an accompaniment to a cup of tea.

There have been plenty of commercialisation attempts. The Department of Veterans’ Affairs has rules about what can be called an ‘Anzac biscuit’ and prohibits the import of Anzac goods without the Minister’s permission.

There are fines for producers who introduce errant ingredients like chocolate chips under the Anzac label, and don’t even think about calling it a cookie as some commercial producers have attempted to do.

But the essence of the Anzac is homemade, and not without its thrills as the bicarbonate of soda fizzes up through the sweet melted butter and golden syrup.

So should the resulting biscuit be crunchy or chewy?

The origin story about sending biscuits overseas suggests that they’d need to be crispy to survive the trip and remain edible. But a quick survey of the Region Media team’s family recipes and a couple of Canberra bakeries suggests that a moderate degree of chewiness is appreciated.

Catherine and Dean Elliott at the Spence Bakery make everything on the premises and always have Anzacs on the shelves around this time of year.

“Ours are more chewy. They’re my husband’s mother’s recipe”, Catherine says. “My husband and son do all the baking. We have Anzacs in stock often throughout the year, but we definitely increase production around this time of year so they’re stocked for the whole week ahead of Anzac Day”.

And, Catherine says firmly, they are “Anzac biscuits, not cookies!”

Three Mills’ Jarrod Deaton says Anzacs are always on the baking list, although most likely to be available in their own shops rather than online.

He’s in the chewy not crunchy camp, too. He agrees that Anzacs are all about childhood memories and home cooking.

“Throughout the year, we have these little experiences where food is linked to the seasons, to your memories,” he says.

Come the weekly Region Media staff meeting (where biscuits, slice or cake are always on the table), we’ll be relying on the foundational Women’s Weekly recipe. Do you like your Anzacs chewy or crunchy?

Crunchy edges, chewy in the middle.

Mmmmm yummy either way. What I’ve noticed is crunchy when you open the bag, chewy a couple days later! 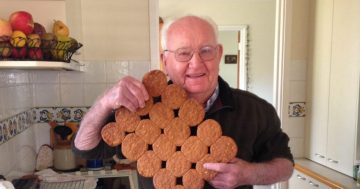