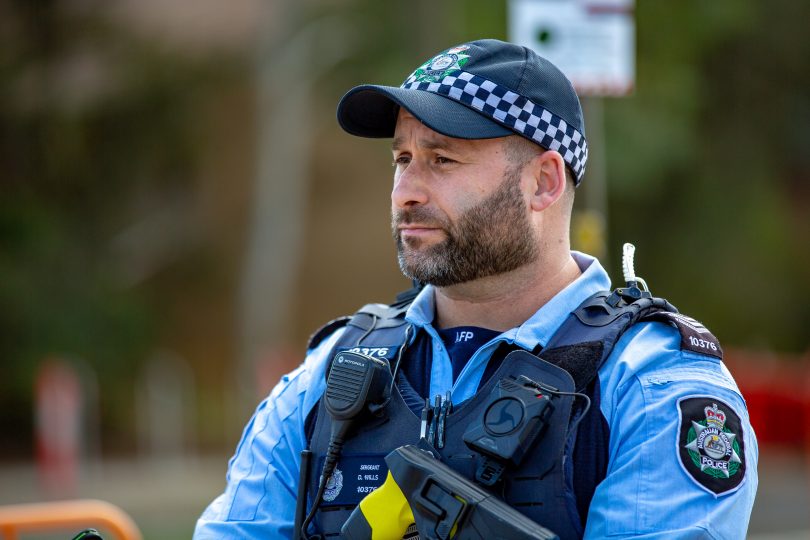 “No excuse for handling your phone while you are driving” – Acting Officer in Charge of Traffic Operations, Sergeant David Wills. Photo: George Tsotsos.

Targeting driver distraction this month as part of their 2018-19 Road Safety Calendar, police said that they have issued 316 traffic infringement notices related to driving while using a phone so far this year (January – May) each carrying a penalty of $470 and three demerit points.

“There’s no excuse for handling your phone while you are driving. It is a practice that is very dangerous and unnecessary. Hands-free technology is readily available but the best option is to turn your mobile phone off or put it out of reach while you are driving,” Acting Officer in Charge of Traffic Operations, Sergeant David Wills said.

“Missing or not taking a call is a significantly better option than a serious collision that could have serious life-altering or fatal consequences.”

According to ACT Policing, driver distraction is any action that takes a driver’s attention away from the road or impacts their driving ability. This includes using a mobile phone, driving with headphones, tuning your radio, managing children or pets on board, or even applying make-up.

Last year, a national survey carried out on behalf of Suncorp revealed that almost half of ACT and NSW motorists have had a near miss because they were distracted while driving, with 15 per cent of respondents actually causing an accident due to distractions.

According to the survey, which questioned more than 5,000 ACT and NSW motorists, the greatest distraction, particularly for parents, is having to discipline misbehaving kids while driving, with 59 per cent of respondents confirming this statistic. Misbehaving pets in the car, opening food while driving, and picking up something they have dropped inside the car were also listed as major distractions for drivers.

Thirty-two per cent of people said they have had verbal conversations with a handset in hand, 38 per cent with the handset on their lap, and 46 per cent using a hands-free kit in their car.

I’m a bit old fashioned, but is using a fax machine while driving an offence?

The current laws are stupid and encourage people to break them.

Using a mobile phone for something simple such as checking an sms while stopped at traffic lights is not dangerous and at worst generally would result in an annoyed driver behind you beeping their horn. This is not really any different from adjusting the radio or heater or lighting a cigarette while stopped at the lights.

Using your phone while moving is dangerous. However I believe many people, concerned about being caught checking their phone while stopped at the lights where there are plenty of bored people looking around, choose to do so while moving because they think they are less likely to be spotted.

These coppers are either a bunch of fools or think we are a bunch of fools. To put out some media not followed up by concrete action actually has the opposite impact to the one intended. I see folk of all ages, genders and persuasions using their mobiles while driving. I am sure pretty much everyone else does as well. I haven't seen anyone actually stopped for the offence (or pretty much any offence), nor met anyone who has been booked for it!

Oohh give me phone thats actually works on voice command .. . Its like a space Odysse 2000 .. we cannot find that number in your contacts list ...... DAVE

so is it using or handling?

Both. Unless the phone is attached to a approved craddle/holder of sorts.

The so called smart systems in modern cars allow people to legally make and receive phone calls. Well I think these sync, etc systems are shockingly distracting. They require far too much interaction, even just to change the temperature control. They are a disaster waiting to happen :-(

wish they'd catch more of them.

Domenic Fabbo because there are very few police on the actual streets people get away with it. Red light runners are another problem and speeding.

There are police out on the streets. They are also dealing with assaults, burglaries, thefts, mental health consumers, etc etc!

ChrisinTurner - 43 minutes ago
But we have $billions to replace buses to Woden with slower trams. View
Public Sector 171

Gavin Bradley - 2 hours ago
Mary-Ellen Bradley not us this is only ACT gov View
Kerry Apted - 7 hours ago
excellent! View
Samantha Freeman - 9 hours ago
Tell that to the Federal Govt. No one has moved to a hybrid model, only state Govt View
Opinion 16

Sofia Zivkovic - 2 hours ago
No point, comp is getting worse each year. View
Tim Mitchell - 9 hours ago
The joint A-Leagues men and women trophy really strengthens Canberra's bid. Would be strange having Canberra as the only team... View
Community 142

Ota Save - 4 hours ago
Sue Sutton No worries Sue. Happy to help ❤️ View
Sue Sutton - 4 hours ago
My Mum has wonderful neighbours who have been helping keep her lawn in check. Thank you Ota and family xx... View
Bill Gemmell - 5 hours ago
Barbara Eglitis I was wondering how long it would take. Seriously, I had the Fowles St Park project in Weston in mind. Sugges... View
News 33

purplevh - 4 hours ago
If a dog ever chased me on a bike I would turn around and chase it. They soon get the message when that happens.... View
purplevh - 4 hours ago
I like your point about heavy vehicles but the same goes for a motorcycle licence BECAUSE you are the one most likely to be h... View
Opinion 13

kenbehrens - 5 hours ago
A few years ago when we were visiting our son in Sydney, there were blankets and items of clothing under shelter on the stree... View
jwinston - 5 hours ago
harcm said “tim_c – what a load of rubbish you talk. What if your schooling was completely disrupted by domestic violence... View
Acton - 5 hours ago
The money you are giving out of misplaced guilt to a street beggar is just funding their drug, smokes and/or booze addiction.... View
News 1

Linda Stapleton - 12 hours ago
I may no longer be a young woman but can I just say I have yet to meet one woman who has NOT been sexually harrassed or assua... View
show more show less
*Results are based on activity within last 7 days

@the_riotact @The_RiotACT
Summer has arrived in #Canberra, which means this week's Ken Behrens #Quiz is all about cricket, ice-cream and music, plus a few other tidbits such as current affairs, ACT trivia and Miley Cyrus https://t.co/toISNbH9dm (1 hour ago)