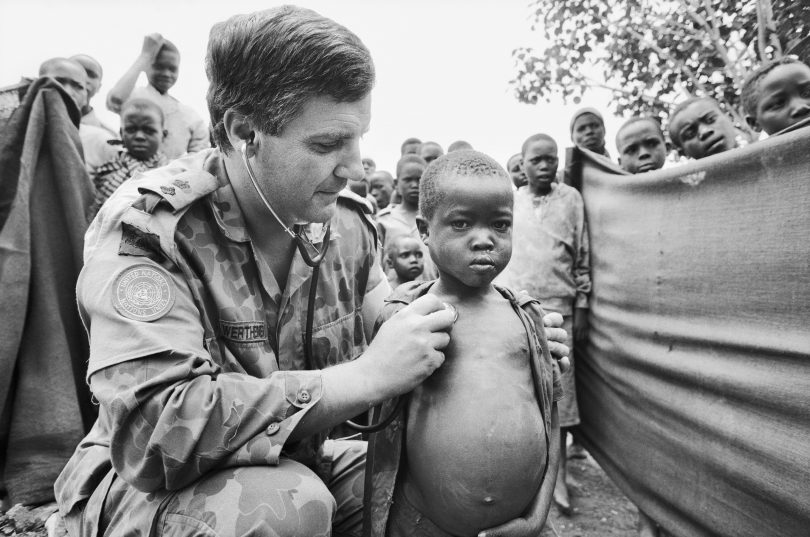 In 1994, ethnic tensions in Rwanda erupted into violence across the country as members of Rwanda’s majority Hutu ethnic group began murdering members of the country’s other main ethnic group, the Tutsi. Some half a million people died, including ten United Nations personnel.

On Saturday February 22, join representatives from the United Nations and other peacekeeping bodies as they commemorate what was arguably the first violent peacekeeping activity in which the Australian Defence Force took part since the Vietnam war.

Seating will be provided at the ceremony, as well as at the official VIP reception afterwards.

Vice President of the Australian Peacekeeper & Peacemaker Veterans’ Association, Ian Lindgren says the humanitarian crisis in Rwanda between 1994 and 1996 is remembered particularly because of its violence. “The overall UN operation was known as Operation TAMAR, which was largely medial in nature and had a protection force numbering about 700 people or so. In the post-Vietnam era, when we’d just started participating in a large scale humanitarian operations, this was one where the world looked on in horror, when unspeakable atrocities were committed.

“What’s special about this year is that it is the 25th anniversary and it coincides with the awarding of the Meritorious Unit Citation, recognising the sustained and outstanding service of those involved,” Lindgren said.

For more information about the event, and for background on the conflict, head to dva.gov.au.
For those unable to attend the service, watch the event live streamed here.

Find out more about the Australian Peacekeeper & Peacemaker Veterans’ Association at their website.

When ethnic tensions in Rwanda turned violent in 1994, a large contingent of Australian service men and women were deployed to assist in peacekeeping efforts.This is the story of Operation TAMAR.Veterans who served in the Operation can also apply to receive their individual Meritorious Unit Citation at the official post event function. Australia says #ThankYouForYourService. For more information and eligibility, visit: https://www.defence.gov.au/medals/Hon-Decs/Gall-Dist/Meritorious-Unit-Citation.asp

Ricky Toms - 3 minutes ago
Hopefully Vodafone... View
Ann Parker - 4 hours ago
A lookout would also be lovely View
Annie Clarke - 8 hours ago
What is also needed is a rest area with a toilet half way, on both sides. View
Motoring 4

Shiva Sapkota - 7 minutes ago
Geoff Richardson it’s actually 40 as per the mayor... View
Hans Dimpel - 42 minutes ago
so many people worked so hard to get it done, but that guy has to be in the picture.... View
Phil Hopkins - 1 hour ago
Yeah let them divert through Jerrabomberra instead - disgraceful. And now 'Poplars' business park at the entrance to Jerra. D... View
Opinion 30

John Elliott - 41 minutes ago
I used to vote Labor when Jon Stanhope was running the show and I voted for Katie in 2012 ... But the current Labor leader Do... View
Michael Quirk - 5 hours ago
Barr is no visionary. He makes decisions without evidence. Stanhope is right to expose... View
Leos Nikias - 5 hours ago
Zakzook Chico There were a few other failures by him.... View
Community 9

Marea Fatseas - 9 hours ago
Ashley Wright sorry, can you please explain how it makes sense to make Canberra a magnet for waste from interstate? When I lo... View
Ashley Wright - 12 hours ago
Alex Troy Elsworth Adkins it makes sense to me too. But FYI the sidings have long been removed. The space is still there to p... View
show more show less
*Results are based on activity within last 7 days

There is a convention that former political leaders are supposed to stay out of the spotlight once they have left...
News 35

@The_RiotACT @The_RiotACT
Chief Minister Andrew Barr has stepped into the row over Geocon's plans to build a 6-8 storey apartment building in old Kingston, saying the proposal goes too far and is not the right fit for the suburb https://t.co/kvWSsXddLL (34 minutes ago)

@The_RiotACT @The_RiotACT
It's tax time again, and the ATO says it is making things easier this year, given it has been an unusual one for many people. Here are some things to keep in mind when doing your return https://t.co/KzJMzg2nIS (1 hour ago)