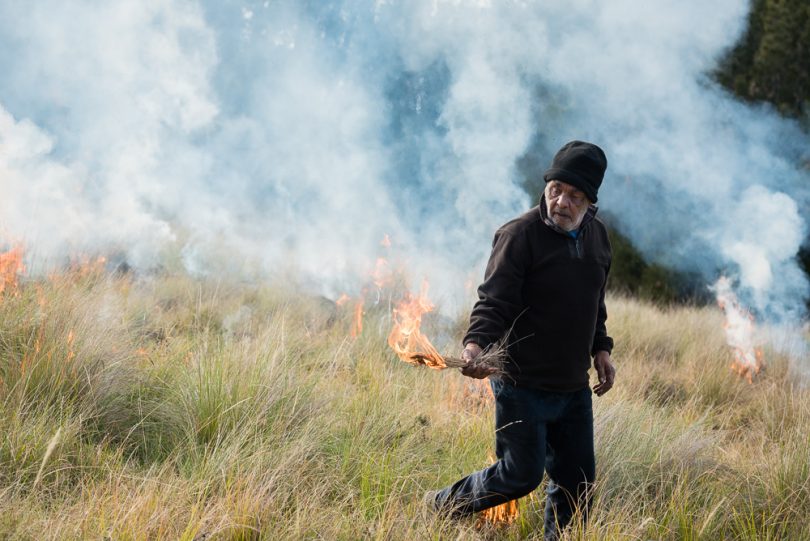 SCAE’s business manager Prue Bartlett says people are worried about fuel loads post-bushfires and have been wondering whether they can hire crews to put knowledge into action on private land.

Cultural burning is proven to reduce the intensity of bushfires over time.

“This is kind of a new thing; no-one has ever done it before,” says Prue. “Finding consistent funding to do cultural burns is difficult and has historically employed crews casually. We hope to have two or three crews working consistently, burning not just on private land but on council land and in national parks as well.”

Tall grass burnt lightly across the hillside with thin white smoke drifting up towards nearby trees, while local Aboriginal elders, landholders and friends watched on in safety.

“This is the way it is supposed to be,” enthuses Walbanja elder and traditional owner Uncle Les Simon.

Uncle Les and Owen Carriage started SCAE in response to the need for more cultural burning – the ancient Aboriginal method of regenerating country – they say.

The plan is for the crew – which includes Andy White from Batemans Bay Local Land Services, and Dan Morgan and Noel Webster from Bega Local Aboriginal Land Council – to carry out a long-term controlled burn, starting with the open grassland they burnt last week and moving to coastal eucalyptus forest on the same property at a later date. 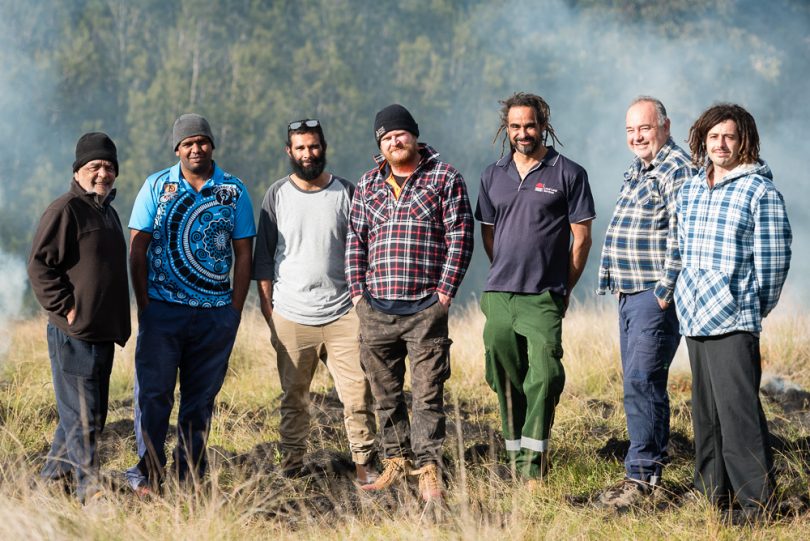 “This area is being burned first because that was what the conditions called for,” says Uncle Les. “Or to be more poetic and use a more Indigenous phrase, this is what country wants.”

The crew considers every aspect of the land before burning, from vegetation cover – in this case, native Themeda grasslands – to wind direction, slope of the land, soil moisture content and the time of year.

“When the conditions are right, the forest floor will get its turn to burn in this gentle way, too,” says Uncle Les.

Cultural burns are much cooler than hazard reduction burns and operate according to the deliberate use of natural mosaic patterns in nature, making them easier to control and allowing fauna to relocate and survive. Such burns not only remove leaf litter, restoring the conditions under which native grasses can flourish, they also trigger the seedbank.

“Using fire as a tool controls weeds, reduces thick shrubs and fuel, and triggers the plant species that prefer this relatively ‘cold’ fire – the ones that became adapted to it over countless generations of Aboriginal tending to and caring for country,” explains Uncle Les.

Hot burns – such as an out-of-control bushfire or hazard reduction burn – become a vicious cycle as plants which prefer hot burns prevail and devastating bushfires actually become more likely, according to Les.

SCAE is dedicated to promoting the safe use of fire to regenerate bushland and farms, but the elders also have a bigger vision in mind. They are developing a business model for cultural burning on private properties and see it as a stepping stone to a renewal of cultural traditions.

The association hopes to secure funding to create employment for elders and the youth they train, incorporating sustainable business models to offer traditional burning to the wider community.

In time, they hope this will also include guided walks on country, a local rangers program and cultural campsites that could be used to revitalise Aboriginal ceremony as well as provide for ecotourism possibilities and more education, training and employment opportunities, not only for Aboriginal people but also the wider community.

If you are a private landholder with native vegetation and wish to engage a cultural burning team to manage your land, you can contact Prue Bartlett on 0427 825 273.

I am curious are they still required to have a fire crew present for safety ?

What happens if it gets out of control ?