18 May 2021 | Albert McKnight
Start the conversation 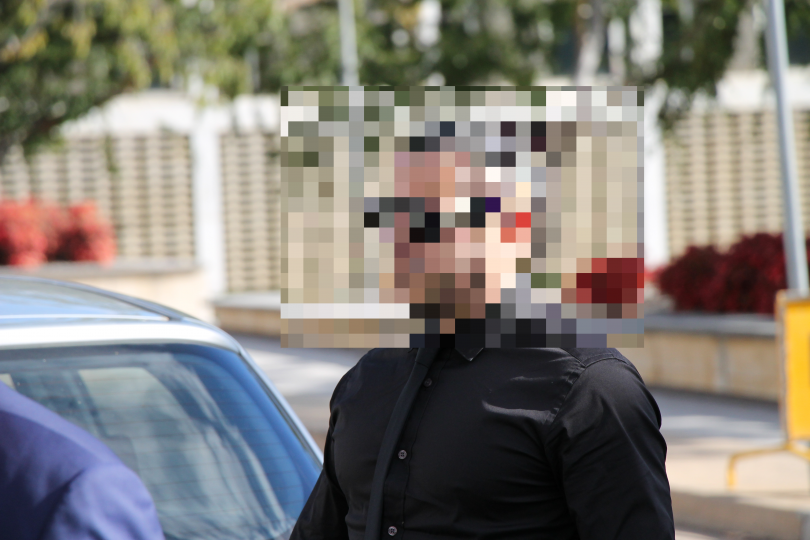 The man who pleaded guilty to affray and cannot be identified for legal reasons approaches the ACT Courts on Monday. Photo: Albert McKnight.

As footage showing bystanders filming the fight during which a Canberra bikie boss was murdered was screened to a courtroom yesterday (17 May), the magistrate lamented how some members of the public appeared to see violence as entertainment.

The CCTV recording was screened during the first sentencing for the men who have pleaded guilty to their roles in the brawl at Kokomo’s in Civic on 19 July 2020 in which Canberra Comanchero’s commander Pitasoni ‘Soni’ Ulavalu was stabbed to death.

In the footage, recorded by cameras in and just outside Kokomo’s, a crowd of people can be seen gathering around tables in the nightclub. These people start throwing punches, then the brawlers smash into tables and chairs.

During the melee, Frederick Elijah Mercy Tuifua can be seen striking Mr Ulavalu hard in the neck before the bikie boss stumbles around the room and eventually walks out of the screen.

During the fight, other patrons of the nightclub jump out of the brawlers’ way to the sides of the rooms as they move around a bar area and into the restaurant but, while some appear to be nervous, others watch on and, apparently, some even film it.

Magistrate James Lawton mourned their actions to the ACT Magistrates Court on Monday (17 May).

“I despair we now live in a society where people get their phones out and film violence as a source of amusement,” he said.

Instead of attempting to break up the violence or calling police, he said bystanders appeared to just “sit and watch”.

The man he was sentencing, who cannot be named for legal reasons, was the first to plead guilty over the fight; he has confessed to a charge of affray and is not accused of any involvement in Mr Ulavalu’s death.

The only person accused of killing the bikie boss is Tuifua, 26, who has pleaded guilty to murder.

On Monday, defence barrister Kieran Ginges of Burley Griffin Chambers told the court the fight began after a “bit of mischief” with a bag that caused “tempers to flare”, and that his client was trying to recover the bag before the violence broke out.

Court documents tendered to the court on an earlier occasion show after Tuifua’s group entered Kokomo’s, one of them, Maximilian Ellis Kurt Budack, placed his bag on Mr Ulavalu’s table while having a disagreement with two other Comancheros.

Budack was removed from the nightclub by security and Mr Ulavalu looked through the bag before pulling out an item and giving it to a member of his gang, who went into the bathroom and stood in front of a paper towel dispenser.

Mr Ulavalu wrapped his jacket around the bag and gave it to a Kokomo’s staff member, who placed it behind the bar.

When police later searched the paper towel dispenser, they found a wallet with Budack’s photographic identification.

In court, Mr Ginges said his client was one of the last to join in the affray and had joined it to “defend his side”.

He said his client spent 64 days in jail, including 23-hour-a-day in lockdown for his own safety.

Mr Ginges said his client “lives in absolute fear” as bikies had identified him and his family.

Magistrate Lawton accepted the man’s involvement in the fight was a “spontaneous, stupid decision on [his] part”.

He took into account the “significant threats” made against the man and his family since the event and said the “tragic murder of Mr Ulavalu” was a separate matter to what the man had gotten himself involved in.

He did, however, note the fact the brawl was in a public restaurant was “particularly serious”.

After the CCTV showing Mr Ulavalu’s murder was played to the court, a security guard told one of the people present in the room to delete a recording of the footage they had apparently taken on their phone.

Three other men – Budack, Matthew Rokosuka Vakatagi Kupu and Osaiasi Avanua Sydney Kupu – have all pleaded guilty to single charges of affray over their roles in the brawl and will be sentenced in June.

Another man who cannot be named is also charged with affray.

Tuifua, the only person charged with killing Mr Ulavalu, has been committed to the Supreme Court for sentencing.