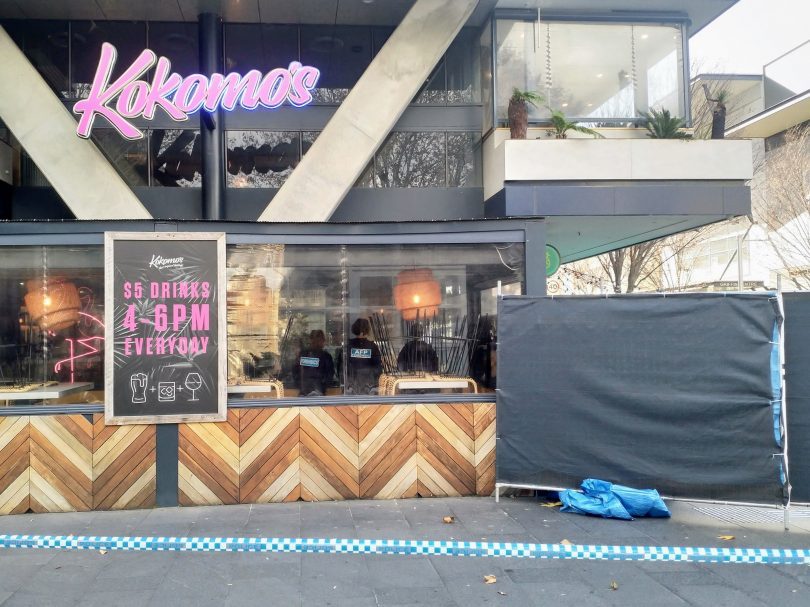 Three more men charged over the Kokomo’s brawl in which the Canberra Comanchero’s commander was killed have admitted their roles in the fight.

Also, newly released court documents submitted as part of their guilty pleas have shed more light on the events that took place before the death of Pitasoni ‘Soni’ Ulavalu.

But in the ACT Magistrates Court on Tuesday (16 March), the three each changed their pleas to guilty for a single charge of affray with five or more people present and had other charges withdrawn.

None of the trio is accused of killing Mr Ulavalu.

According to the statement of facts, on 18 July 2020, the Kupus and Mr Budack arrived at Kokomo’s at about 11:30 pm where Mr Ulavalu was already sitting with other Comancheros.

After Mr Budack, 26, approached two of the bikies, they “appear to enter into a disagreement”, the facts state, before he put his bag onto Mr Ulavalu’s table.

Mr Budack then pushed one of the Comancheros in the chest before being taken out of the venue by security. He then argued with them about a “lost or stolen bag”.

Inside the club, Mr Ulavalu looked through Budack’s bag. He gave an item to another bikie, who went into the men’s toilets and stood in front of a paper towel dispenser for a short time, while Mr Ulavalu wrapped his jacket around the bag and gave it to a staff member who put it behind the bar.

“A later search of the paper towel dispenser bin identified a wallet inside of it containing photographic identification in Budack’s name,” the facts state.

Mr Budack and the Kupus later approach the bikies in the club, and Mr Ulavalu tapped Mr Budack on the shoulder several times while pointing at the bar area.

At about midnight, Frederick Elijah Mercy Tuifua, 26, entered Kokomo’s and allegedly rushed towards one of the Comancheros while holding a knife.

The facts say the two groups – the Comancheros, and Mr Budack and the Kupus – began “pushing and punching each other”.

During the fight, Mr Ulavalu tried to separate people, but while his back was turned, Mr Tuifua allegedly stabbed him in the neck.

ACT Police were called to the scene over a disturbance involving about 15 people. Police found Mr Ulavalu lying face down in the gutter on Genge Street, near the entrance to Kokomo’s.

Ambulance officers later pronounced him dead at the scene.

On 4 August, Mr Budack was taken to the Canberra Hospital with three gunshot injuries. Soon after, he and the Kupus were arrested over the brawl.

In court on Tuesday, Magistrate Louise Taylor accepted the guilty pleas of the Kupus and Mr Budack and set the sentencing date as 29 June.

Prosecutor Luke Crocker said it was expected the sentencing would take an entire afternoon as “significant CCTV footage” would be played.

The Kupus’ bail will continue ahead of their sentencing, while Mr Budack was remanded in custody. They face a maximum penalty of five years’ jail.

Mr Tuifua has pleaded not guilty to a charge of murder over the death of Mr Ulavalu. He will next appear in court later in March.

Early in February, a man who cannot be named was the first to plead guilty to a charge of affray over the brawl. He will return to court for sentencing later this year.

Another man who cannot be named is also charged with affray and will also appear in court later this year.