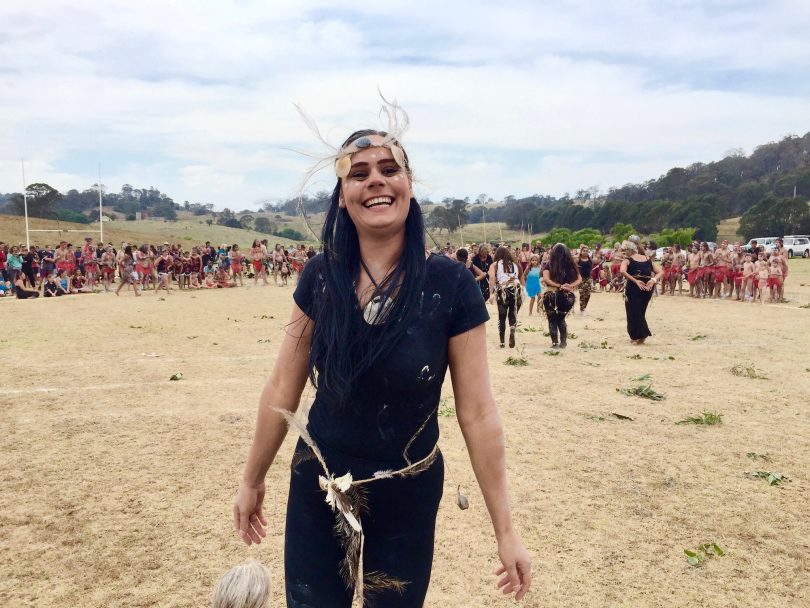 Happy and proud – Ashleigh McGuire says there were over 60 events across Australia on this day. Photos: Lisa Herbert.

Nation Dance called First Nations people together to dance at 1:00 pm, wherever they were across this wide continent. Around 60 organised events took place across Australia, New Zealand, Nigeria and North America. Indigenous Australians in prisons across the nation were also permitted to dance.

For the Yuin Nation, the largest gathering of tribespeople in 150 years took place at the foot of Gulaga Mountain (Mount Dromedary), within view of Najanuga (Little Dromedary). Allies and non-indigenous family members were invited to come, to observe and show their support. 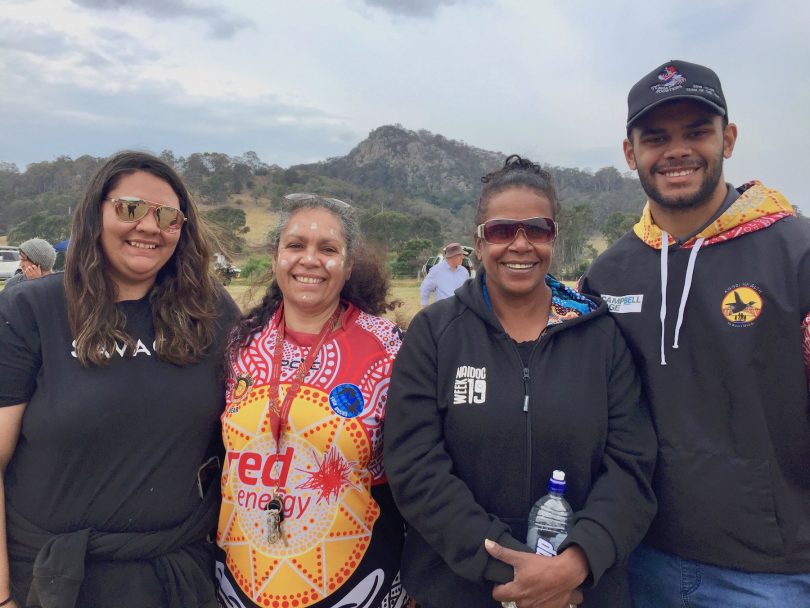 Well over a thousand people assembled at the Tilba Sports Ground to witness this historic event, known as a ‘bunaan’ in the local language. The event was emotional, exciting, insightful and everyone learned something about our Indigenous brothers and sisters. We clapped and stomped, feeling the energy as one in support and solidarity.

Yuin Country extends the length of the coast from Sydney to Mallacoota. Earlier in the week, Yuin Elder Warren Foster told About Regional that “Mother Gulaga is calling all her children home to stomp the ground where the Yuin creation story began”.

Leaders in their community, instrumental on the day. Warren Ngarrae Foster (Snr) and son Warren Foster.

Hundreds of Yuin men, women and children brought clap sticks, didgeridoos, painted and decorated themselves, and danced and sang throughout the afternoon. The Emu, The Black Duck, The Wallaby, The Black Cockatoo, “these are all the family dances, they’re for everyone, not the real secret dances,” a young dancer explained.

People from Nowra, Narooma, Tasmania, New Zealand, Eden and Wallaga Lake all expressed excitement and pride at being able to attend such a gathering. Many called out “we are hungry for home, we’ll always come back home” and “this must happen every year.” 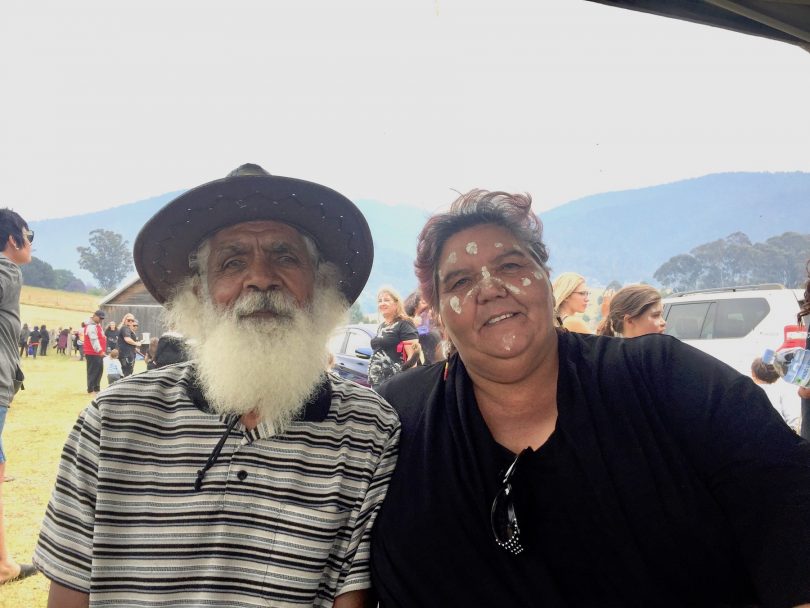 “We are very excited,” Kevin Mason of Narooma and Lyn Pender of Nowra.

One woman told me “there is no living memory of this happening, we are so excited for our elders and our young people.” Many expressed their joy that instead of gathering together for ‘sorry business’ they were gathered here to celebrate and create unity.

The Nation Dance call-out asked First Nations people across Australia to “dance for our old people, our homelands, the rivers, our children, our justice, our healing. Mother Gulaga, Father Sky, grandmother moon and grandfather sun. Simply dance wherever you are and be a part of this collective energy.” 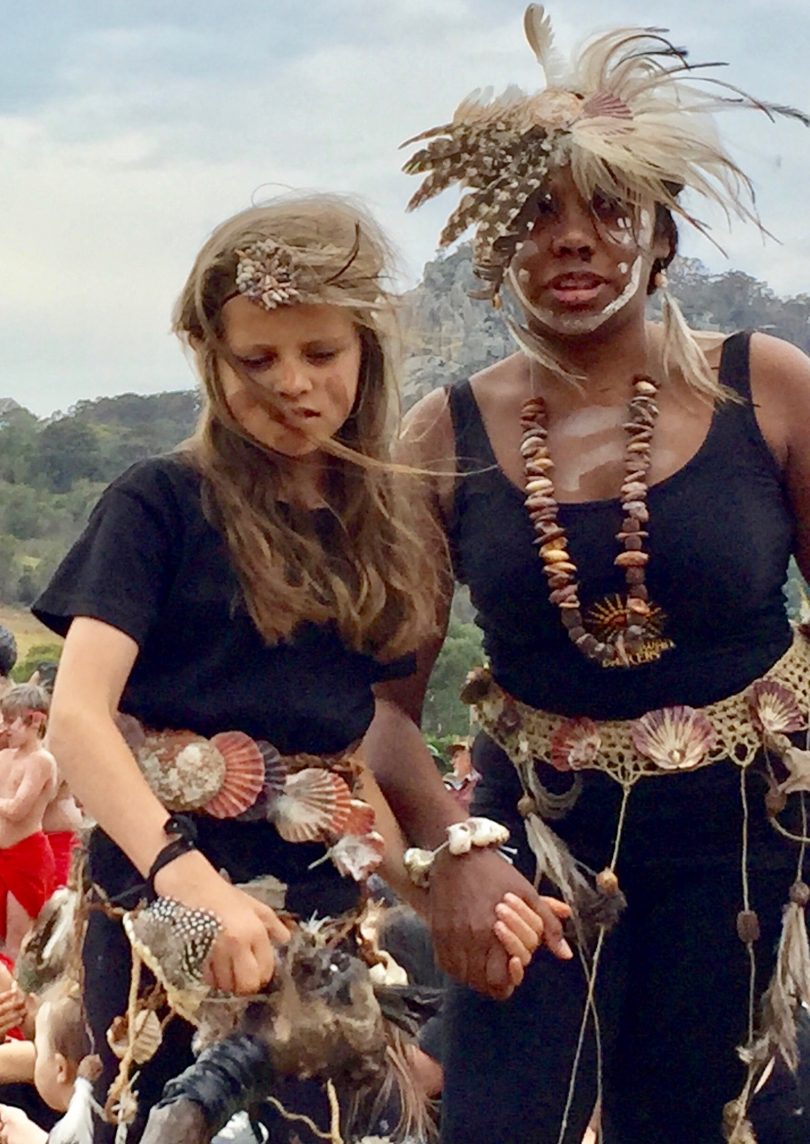 There were many special moments at Gulaga on Sunday.

A hashtag #nationdance search on Monday morning revealed some awe-inspiring footage of gatherings that took place during Sunday afternoon, including others on Yuin Country, many in Sydney suburbs, on the beach at Yamba, in Cowra, many in West Australia, Adelaide, Canberra, Dubbo … it seems the whole country was dancing.

“For the first time in history, First Nations People and their Nations across the continent were encouraged to dance on country as one in time. With the modern-day usage of technology, we have had the opportunity to connect with each other from all over in an instant. We can reach the 400 plus Nations, and 200 languages spoken. The digital platform allows us to share and create unity,” announced the Dance Nation organisers on Facebook.

For centuries Aboriginal people have danced on this land for all kinds of purposes and in sacred ceremonies. This unique web that spans the continent has many songs and dances that tell stories of who we are and where we come from. It gives us our identity.

“Dancing on country is to honour your people and the nation from which you come. It’s the culture of dancing that glorifies our ancestors and our creation stories. It provides the spiritual healing of self and your environment. Aboriginal people always have maintained belonging to the land and not land belonging to us.”

Towards the end of this incredible session of dancing, singing and chanting, Elder Aunty Shirley Foster was brought the centre of the circle and Djaadjawan woman Sharon Mason called all the Aunties in to participate. 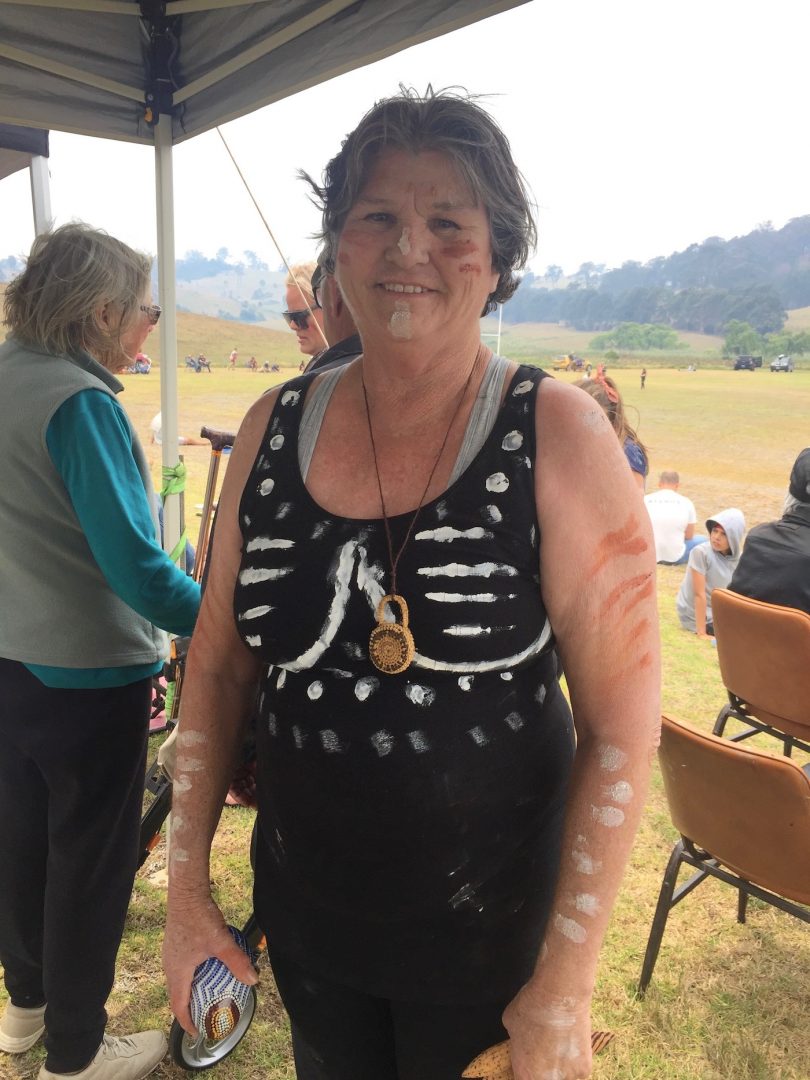 “In September I was visited by an ancestor who told me we “must sit down together and start to heal,” Ann-Marie McIntosh.

Under the watch of Gulaga, there was then a chant for the Elders, and the bare emotion on Aunty Shirley’s face was affecting. The final dances within this sand drawn circle were a stomping chant for the organisers and a chant for rain. Sharon Mason again called out to remind all those gathered, “it is our responsibility to look after the land,” a sentiment many non-indigenous took away with them.

Afterwards, an exhausted but exhilarated Warren Ngaerre Foster said he was “absolutely overwhelmed with the response” and said this will be a yearly event. Co-organiser Ashleigh McGuire of Ripe Mentoring said “many people here today felt completely empowered, that they had seen happen what hadn’t been seen. I could see everyone’s faces, the audience, clapping and stamping, feeling we can walk as one into the future.”

Everyone left the Tilba Sports Ground knowing they had been privy to something rare, momentous. People described feeling ‘up-lifted’, connected to ancestors, that there had been a ‘healing together’.

And then the rain came …

Jonny Ivan - 42 minutes ago
write this year off View
Joanne Mitchell - 3 hours ago
David Warwick and why did they remove the mask mandate two weeks before the first case while Sydney’s numbers were still cl... View
Callum Bowen - 5 hours ago
Completely agree with Simon. For years now we’ve turned a blind eye to thousands of annual flu deaths (and who knows from h... View
News 47

Simon Wheaton - 52 minutes ago
Guy Hosking Google Earth says 1073m. View
chewy14 - 10 hours ago
Astro, I asked for the evidence that Stage 2 of Light Rail was necessary and where the need has been proven from "Government... View
Lifestyle 5

Jizzy Martin - 4 hours ago
Our Lady of the Most Holy Rosary bet you'd complain if a Muslim was preaching Sharia law. This is the same thing circumstance... View
Business 8