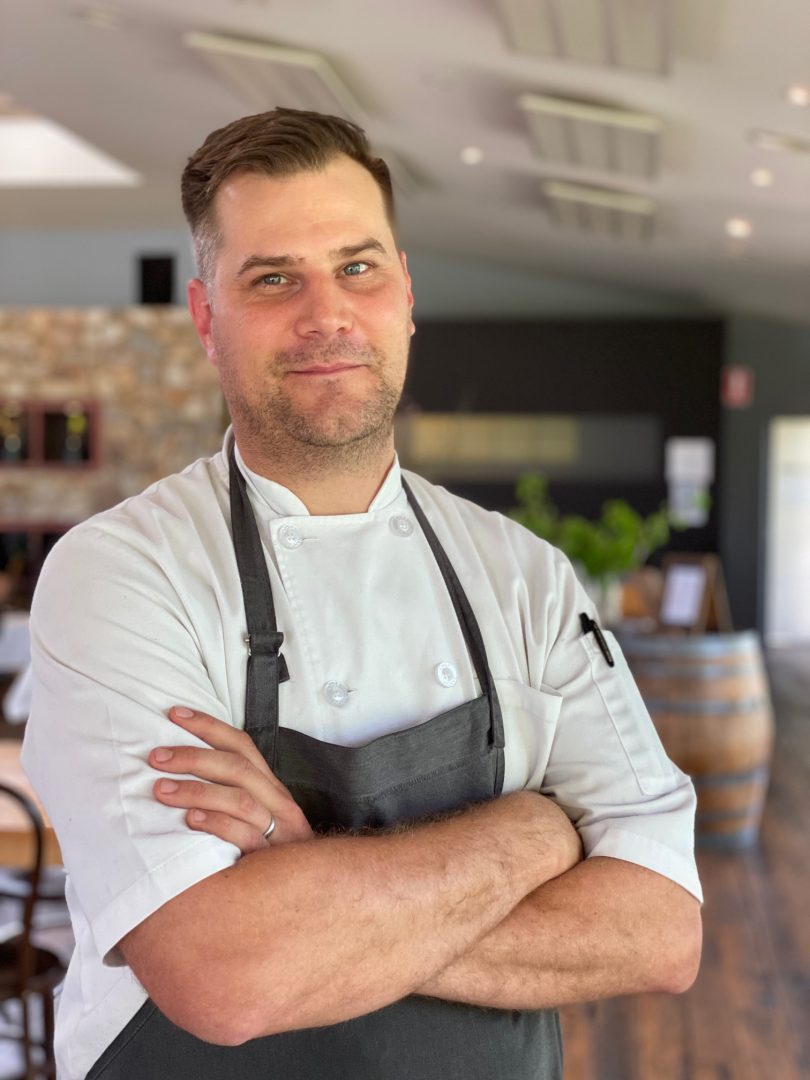 As the first buds of the new season appear on the vines at Lake George Winery, near the town of Collector, a new lifecycle has also begun in the vineyard’s Westering restaurant.

James Titheradge, former sous chef at award-winning Biota Dining restaurant in Bowral, has taken over the reins as head chef and is quickly getting the lie of the organic land.

James was snapped up by Westering, which is set high above the rolling paddocks and vineyards of this pretty winery northwest of Lake George, after finding himself out of a job when the two-hatted Bowral restaurant went into liquidation in early 2020.

His arrival at one of the oldest vineyards in the Canberra region marks something of a homecoming – another 30km southwest and he’d be right back in Canberra, where he served his apprenticeship with Janet Jeffs at Juniperberry and Dean Sammut at Artespresso.

Since then, James has chalked up experience in the kitchens of London’s La Trompette and the Dorchester Hotel; spent three years as executive sous chef with Shannon Bennett’s Vue de Monde group in Melbourne; worked with Teage Ezard and George Calombaris in Melbourne; and worked at Sydney’s Astral – with stints at Courgette, Aubergine and Water’s Edge back in Canberra for good measure.

In between, there was a brief sojourn setting up restaurants for a client in China.

Despite his impressive pedigree, there’s no ego in sight when James pops out of the kitchen for a chat after finishing his first Sunday lunch service at Westering. The new head chef is continuing with the restaurant’s popular winter menu before introducing his own spring line-up next month. 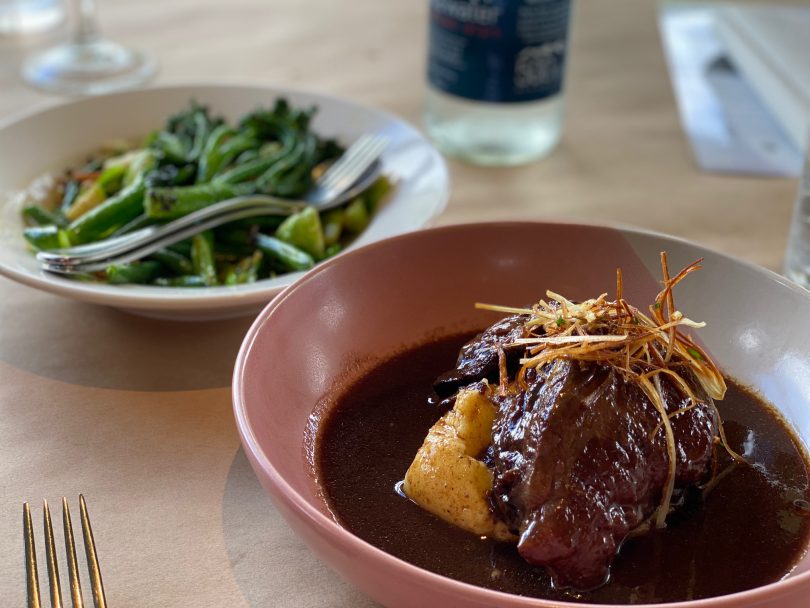 The shiraz-braised beef cheek with creamed potatoes and fried leek at Westering was so tender that no knife was needed. Photo: Michelle Rowe.

A silky smooth and creamy cauliflower veloute, and a plate of Korean sticky chicken with pickled daikon, kale and lemon aioli are two very well received starters. Mains include pan-fried barramundi with potato puree, baby caper butter and lemon, and the best beef cheek dish I’ve ever eaten, glazed overnight with shiraz and served with creamed potatoes and a sprinkling of fried leek. It’s so tender that no knife is needed.

A side dish of sauteed spring vegetables with hazelnuts and brown butter rounds things out perfectly (things are looking decidedly more rounded once we make our way through a coconut panna cotta with golden tamarillo and almond shortbread crumble, and a white chocolate fondant with vanilla ice-cream and seasonal fruit).

It’s simple, beautifully executed comfort food, making the most of seasonal and local fare. James says that’s exactly the way it should be.

“We’re not looking to get chefs’ hats,” he says. “I just want to do tasty, honest, good food. I’m certainly not going to branch out into anything molecular. I don’t think that fits here. I’ll be keeping it quite seasonal, and now that I’m back in the area I need to find my feet again with local suppliers, trialling ingredients, seeing what’s good. It’s a great region for produce.” 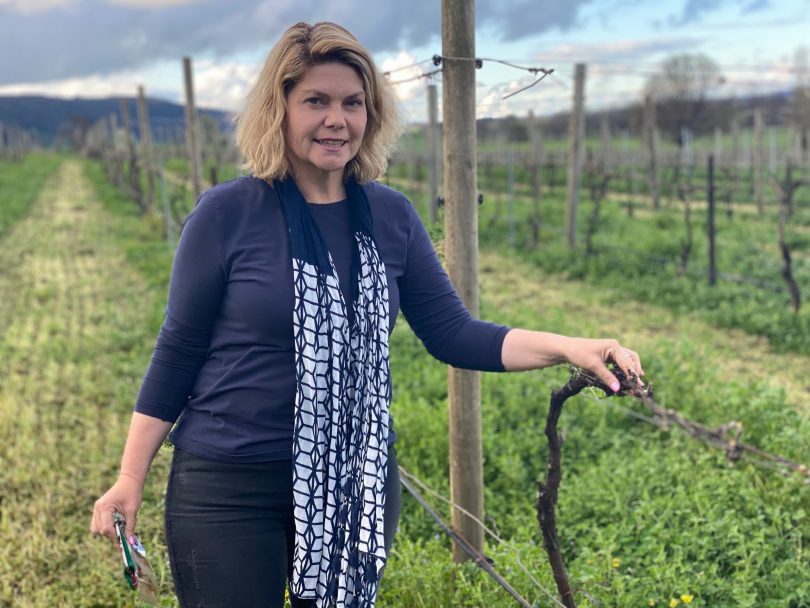 Lake George Winery owners Sarah and Anthony McDougall are thrilled with James’s arrival at the vineyard they bought two years ago after a six-year stint running Summerhill Road Vineyard.

The energetic pair – who between them have five kids, two sheep, a couple of horses and a smattering of dogs and cats – are not ones to rest on their laurels and they are constantly dreaming up ideas to add value for visitors to their 300-acre winery home.

In January, they plonked an ecofriendly tiny house – “Little George” – on the peak of a hill at the rear of the property, offering sweeping district views from its open fire pit and cosy chairs where guests can chill out, wine glass in hand.

Such has been the response – bookings are solid for weeks ahead – they are now considering putting a tree house or two houses further up the ridge for the ultimate wilderness and winery escape.

For those who fancy getting back to nature – albeit with all mod cons – Sarah and Anthony have arranged for 10 glamping tents to be installed in the vineyard’s grounds for the October long weekend (3-5 October). Guests taking part in the A Night Under the Stars event will have the chance to learn from a professional photographer how to shoot the night sky, or chat about the cosmic universe with astronomers from the Australian National University.

Tents will feature queen-size beds, tables and chairs, kitchenware and, naturally, wine coolers. A welcome hamper and complimentary wine tasting at the cellar door will complete the experience. 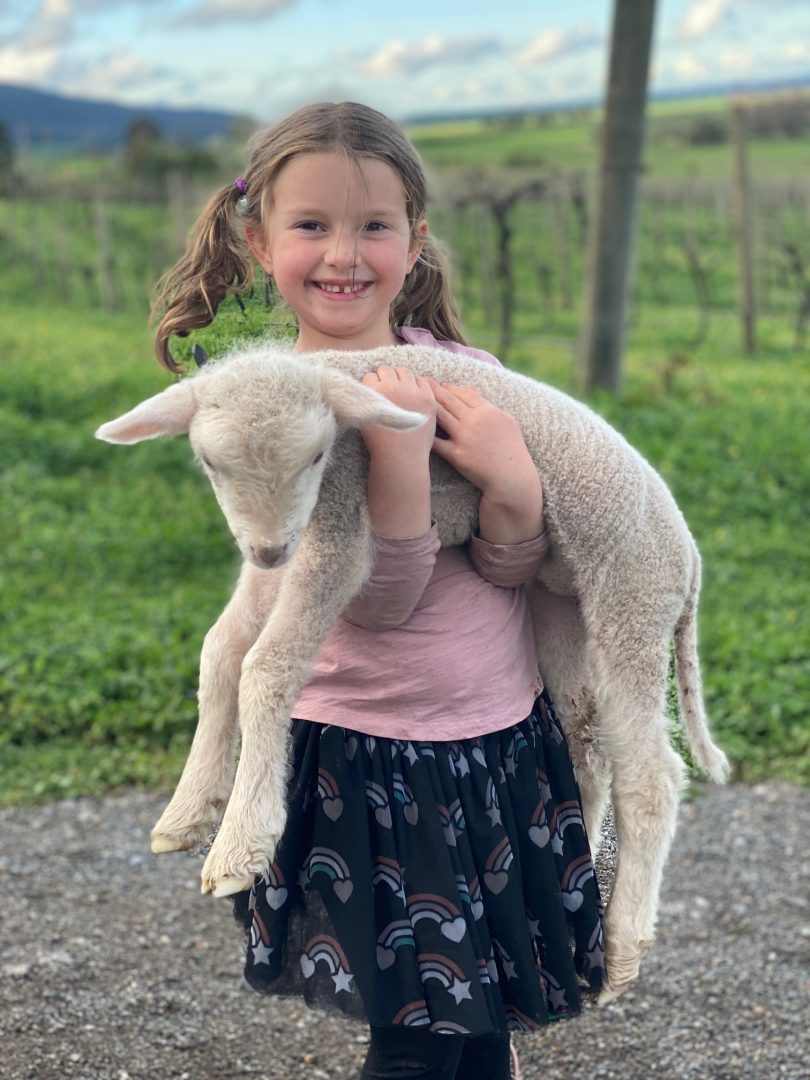 Eloise McDougall gets acquainted with one of the Lake George Winery’s menagerie. Photo: Michelle Rowe.

However, you don’t have to stay overnight to take in the long weekend festivities at Lake George Winery. Saturday morning yoga, live music on the Saturday afternoon, opportunities to feed the resident menagerie, or simply booking in for a lunch served by a chef who certainly knows what side of a Microplane is up are other agreeable excuses to head for the hills.

“The October long weekend has traditionally been one of our busiest times,” says Sarah. “After the bushfires and COVID-19, it would be nice to know there is still that local support.”

To book lunch at Westering, or to nab your overnight glamping spot for the October long weekend, go to Lake George Winery.

Quinton Yang Shall we go here for lunch soon?

Sarah - this is epic. We often went to Bowral just to lunch at Biota. See you soon. 🍽

Nikki Gotovac see you after your tropical getaway 🌴

Elizabeth McMullan - another one to add to the list.

Olivia Abbott Lucy Armstrong what date should I book for?

Lucy Armstrong works for me!

Megan for your bday?

Anne O'Hara - 22 minutes ago
Dave Fuller and will 😡 View
Anne O'Hara - 25 minutes ago
Wasn't an issue until self-government. Mismanagement of basic Canberra services has been an ongoing battle. We are required t... View
Julie Macklin - 40 minutes ago
It's been raining - a lot - that makes grass grow. It's growing the most it has been in years. Cut it and it grows again very... View
Community 1

ssek - 2 hours ago
Give it time and the greens will have all kinds of legislation around halloween to prevent children having fun. View
News 1

ssek - 2 hours ago
These marine parks are ridiculous. Stopping a few people with a rod and fishing line from catching a couple of fish does not... View
News 73

Capital Retro - 3 hours ago
I don't agree with a few of your claims. I am a senior person and at no time in my life have I ever heard of house ownership... View
Motoring 10

oh_ - 3 hours ago
As much as the noise, disruption and burnout smoke is trying for nearby residents, it does bring money and something differen... View
Rob Thomas - 14 hours ago
Floriade? View
Tim White - 14 hours ago
David Perkins you do know that it created jobs and brought millions into our local economy and in some cases kept many small... View
News 5

Chris Hobbs - 5 hours ago
Will ACT residents benefit from 30% canopy cover by 2045 from a massive tree investment, yes! Will we need to remove some old... View
Alice Paris - 6 hours ago
I dont think you understand what is happening here Chris. The Greens and Labor are responsible for the removal of so many mat... View
Bill Gemmell - 6 hours ago
Alice Paris I think people need to talk to their MLAs and let them know how the feel about various issues. I certainly will b... View
Food & Wine 32

Tim Hutch - 19 hours ago
The best way not to give them your money is to do the speed limit. It's really not that hard. View
Food & Wine 21

ACT Policing is investigating an assault that occurred on Tuesday, 13 October at Belconnen Mall. According to police, at about...
Motoring 11

Love it or hate it, Summernats is usually big business for the territory. At a quiet time in the nation’s...
*Results are based on activity within last 7 days

The ACT Greens have been on cloud nine for the past week but now it's time to come down to...
News 31

The ACT's mowing team is battling to stay on top of exploding grass growth in a season vastly different from...
Sport 27

@The_RiotACT @The_RiotACT
Monster Kitchen & Bar is going vegetarian. It's a bold step for any restaurant, but there's serious pedigree in the kitchen to make it work https://t.co/0RKAFh6R47 (1 hour ago)

@The_RiotACT @The_RiotACT
Ten schools in NSW were the target of a bomb hoax yesterday, coinciding with an HSC exam. Police say students may not be evacuated in future https://t.co/i1r4gY2TTE (2 hours ago)

@The_RiotACT @The_RiotACT
HOME in Queanbeyan is more than just a place for people with a mental illness. For Anne Pratt, it's a privilege in her home away from home https://t.co/uxYmovijD0 (2 hours ago)