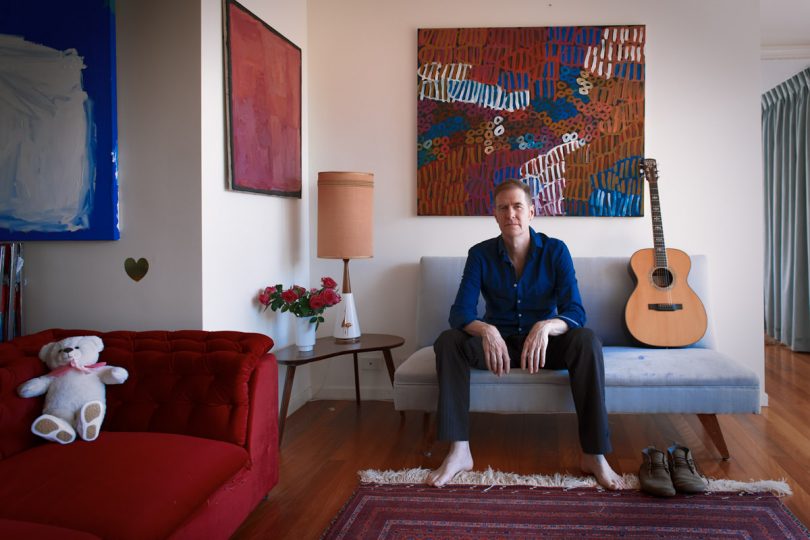 Canberra singer-songwriter, author and wanderer Fred Smith says that his new album, Domestic, is all about “love songs for middle-aged people”.

To be launched at the ANU’s Kambri precinct on St Valentine’s Day, it’s a distinct departure for the musician who has derived much of his previous output from adventures in foreign climes.

Bougainville and Afghanistan, where Fred was the first Australian diplomat to be posted to Uruzgan and the last to leave in 2013, have been the source of albums (Bagarap Empires and Dust of Uruzgan) and a book. The latter also inspired an episode of Australian Story.

Smith says that “stories are banging down the doors” in war zones, “but on the home front, you need to pay a bit more attention. The focus has changed for me and I always write about what’s on my emotional and intellectual radar”.

“By the standards of the day, I’ve always been more inclined to tell other people’s stories, but this time it’s closer to home, hence the title.”

Domestic isn’t an album of entirely new songs – five have been recorded previously – but their arrangement draws close focus on territory that Smith thinks will resonate with an audience juggling complicated lives where there can be pressure from every direction.

“We’ve had the joy of raising our daughter Olympia to the age of six, and meanwhile my wife’s parents have faced illness and death,” he says.

“My father-in-law grew up in occupied Greece, dodging Nazis. He spent the last few years of his life in our sitting room, watching tennis on television, so that’s quite a transition

“These kinds of very ordinary events put pressure on your relationships and they require humour, too. These are serious songs, but I like to think there is a line of wry humour running through them.”

He touches on Helen Garner as one source of inspiration due to her directness, the clarity about mundane things that are somehow deeply touching at the same time because they’re about our ordinary lives.

“Domestic is a collection of songs that I think evoke Australia in the 21st century. We’re a race of piss takers for better or worse, mostly for better – Australians have a scepticism which, I’d like to think, protects us from being duped”, he says.

“There’s a trust and understanding that comes from playing hundreds of gigs together that made the experience in the studio quite lovely,” said Smith.

The album’s short tour begins at Kambri (coinciding with Fred’s 50th birthday) before going on to Sydney and Melbourne. He’s then heading back to Afghanistan again to work on a humanitarian program.

“The situation there is not good,” he says. “There’s drought, ongoing conflict and regional tensions forcing the return of refugees. That’s caused a severe humanitarian crisis. Nine million people are food insecure and they’re grappling with waning international interest.

“It’s fascinating but sad at the same time.”