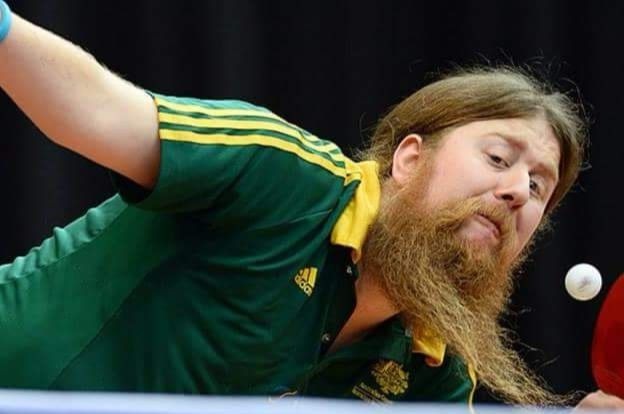 It wasn’t until Trevor Hirth was in his late 20’s that his potential was realised by an ex-Paralympian table tennis player. Photos: Supplied by Anna Maxwell/Morris Walker Pty Ltd.

Trevor Hirth was 29-years-old when he was spotted by an ex-Paralympian table tennis player at his local club and was told that he should try out for the Australian team.

Five years later, Hirth is in Canberra defending his title as the Australian National Para Table Tennis Champion in an extraordinary rise through the para table tennis ranks.

Hirth was 12 or 13 when he started playing in local clubs across Melbourne and only saw it as a hobby.

“Table tennis was always a hobby for me, and I started to play in the backyard on a table that my Grandpa made,” Hirth said.

“Once I played in a club down in the western suburbs of Melbourne, the competitiveness started flowing when I was a teenager. I always played competitively but it was social and I never trained or got coaching and I was pretty much self-taught.”

It wasn’t until he was in his late 20’s that his potential was realised by an ex-Paralympian table tennis player.

“I was playing at a local club in Melbourne and an ex-Paralympian table tennis player came up to me and said ‘hey mate, you should try out for the Australian team’,” Hirth said.

“I didn’t really know too much about it, I wasn’t sure if my disability sort of qualified me, and he encouraged me to play the Australian Open, which is what we are playing this weekend.”

“I managed to win it and that sort of got me into the Australian team and within a few months, I was on my way to Thailand representing Australia.”

“I started playing in some big international competitions like the 2014 World Championships in China, and I got a bit of belting by the top players and then realized that I really need to be put into a training program and take it more seriously.” 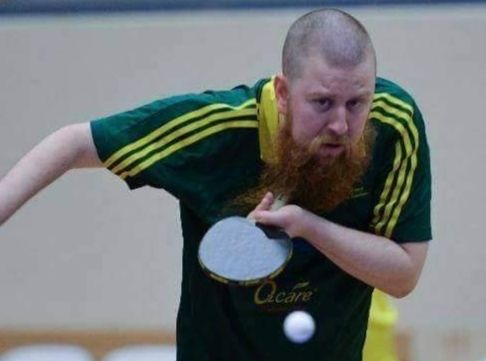 Hirth’s disability is a neuro-muscular disorder that affects the muscles in all four limbs and doesn’t have an official diagnosis.

Playing as a standing athlete in category six, the 34-year-old’s right leg is two centimeters shorter than his left, and his disability affects his power and strength and weakens his grip on the bat.

“The way my disability affects me the most is my balance, so I play a shot and then I have to regain my position which is the thing that is most hard for me,” he said.

“But as part of my daily life activities, it doesn’t really hold me back from doing stuff.”

The four-day competition is the premier event for para table tennis players, with many of the competitors also representing their country at the 2016 Paralympics.

“It is an incredible event that places a spotlight on the enormous skill these athletes have,” Ms Horn said.

“It is a privilege to host the tournament in Canberra this year. Participating athletes have disabilities ranging from physical, intellectual, vision and hearing impairments and all have an amazing skill for table tennis.”

“We’re really hoping to see Canberrans out in full force supporting our para table tennis players. Table Tennis can be an underrated sport, but the talent on show is extraordinary,” Ms Horn said.

The event, which is supported by Vikings Group and hosted by ACT Para Table Tennis, will be at the Tuggeranong Archery Centre from Saturday 5 May to Tuesday 8 May.

Dave N Ange Greer - 3 hours ago
Why is there no comparable list of Queanbeyan region sports stars....? Also how many James Bonds have come from Wagga 🤣 View
Dong Wong - 3 hours ago
look at the face on the dog hahaha View
Alan Byrne - 4 hours ago
Keni Kawaleva all day bra View
News 222

Julie Macklin - 3 hours ago
Benjamañana Fergusunshine The neighbours on your southern side likely won't. View
Kelly McGrath - 4 hours ago
Christine Young my mother and father inks got “free trees” from the govt 40 years ago! We now have the 2 biggest gum tree... View
James Vetos - 4 hours ago
Quite a few comments about price per tree. Does the total cost include the planting of the tree and ongoing follow ups to wat... View
Property 14

@The_RiotACT @The_RiotACT
One look at this week's newsletter and you'd think kangaroos had taken over Canberra... hop to it! Subscribe now for all the latest stories straight to your inbox https://t.co/XVdXBWjSeq (3 hours ago)

@The_RiotACT @The_RiotACT
Planning is well underway for the inaugural 'Great #Queanbeyan Duck Race Festival' next April that will see thousands of rubber #ducks float down Queanbeyan #River to raise funds for local charities https://t.co/VWu1CC4RSv (4 hours ago)