From Braidwood to Mogo, helping NSW farmers with Christmas cheer 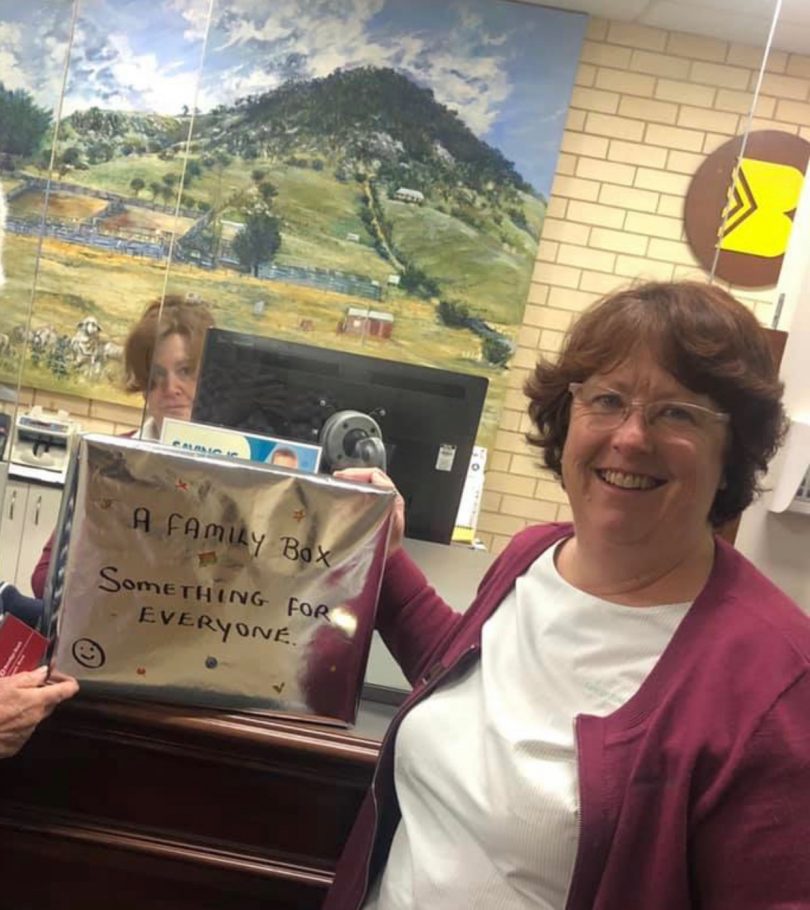 Helen Farley with one of the parcels she has been collecting at Braidwood Bendigo Bank. Photo: Supplied.

Two old friends have joined a new national movement to spread a little Christmas cheer to rural women doing it tough around NSW.

Helen Farley of Braidwood and Theresa Matthews of Mogo are both collecting parcels for distribution by drought-relief organisation Ladies of the Land, which delivers parcels of treats to women living and working on farms during the Christmas period, typically a tough time on any farm due to hot and dry weather.

“I saw on Facebook that Helen was having the parcels dropped off at her work at Braidwood Bendigo Bank and I thought, maybe I could be the collection point for the Bateman’s Bay area,” explains Theresa, who owns The Mogo Lolly Shop.

Non-profit Ladies of the Land was born earlier this year after Elzette Connan, a farmer from Cumnock, NSW, received a package from a friend who knew how much the family was struggling.

Elzette decided to try to put together 100 parcels for other women in similar situations and the project snowballed, with 1000s of parcels now expected to be delivered before Christmas.

Parcels will be delivered to farms using the NSW Department of Primary Industries Combined Drought Indicator Map to determine need. 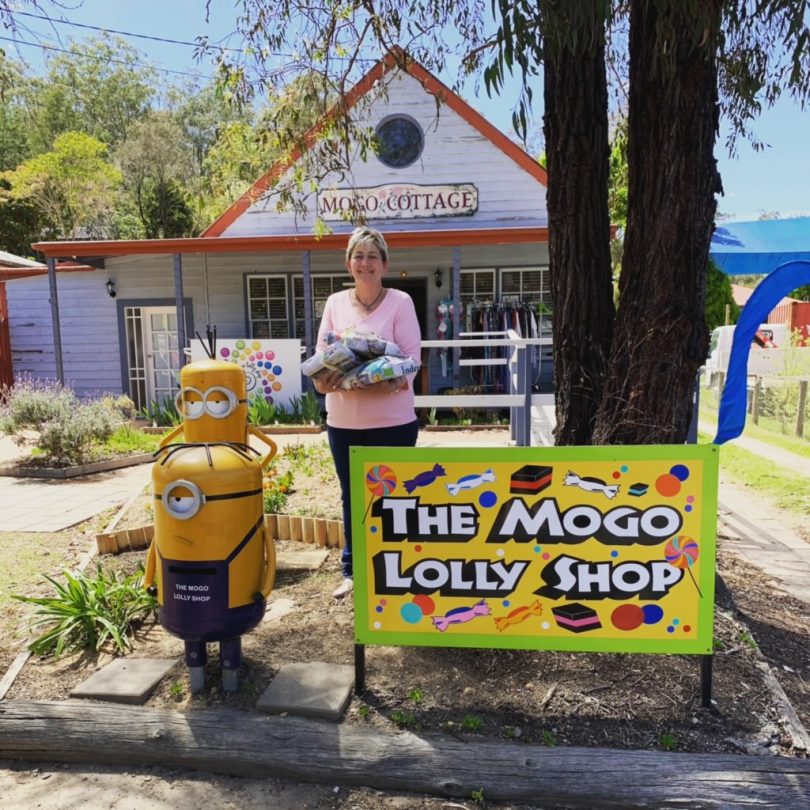 Mogo Lolly Shop owner Theresa Matthews with a few of the parcels she has collected for Ladies of the Land. Photo: Supplied.

Theresa is not unfamiliar with being a lady of the land, having moved to Mogo in 2008 after selling 40 acres near Michelago.

“I used to shower with a bucket to collect water to keep my roses alive through the drought,” she says. “I remember how stressful it was not having water.”

If you’d like to make up a parcel for a rural woman doing it tough, please include only items that will keep well until delivered, like lip balm, tea, chocolate, a magazine, skincare or small clothing items like a scarf or hat – anything you consider a luxury that you might not buy when money is tight. The best way to package them is in a shoebox.

“Batemans Bay Shoes have been really great, providing me with boxes. I now have some in my car so flag me down or pop into the shoe shop if you don’t have one!” Theresa laughs.

Wrap the parcel in your local newspaper so the recipient knows where it comes from and don’t forget to include a note or card. 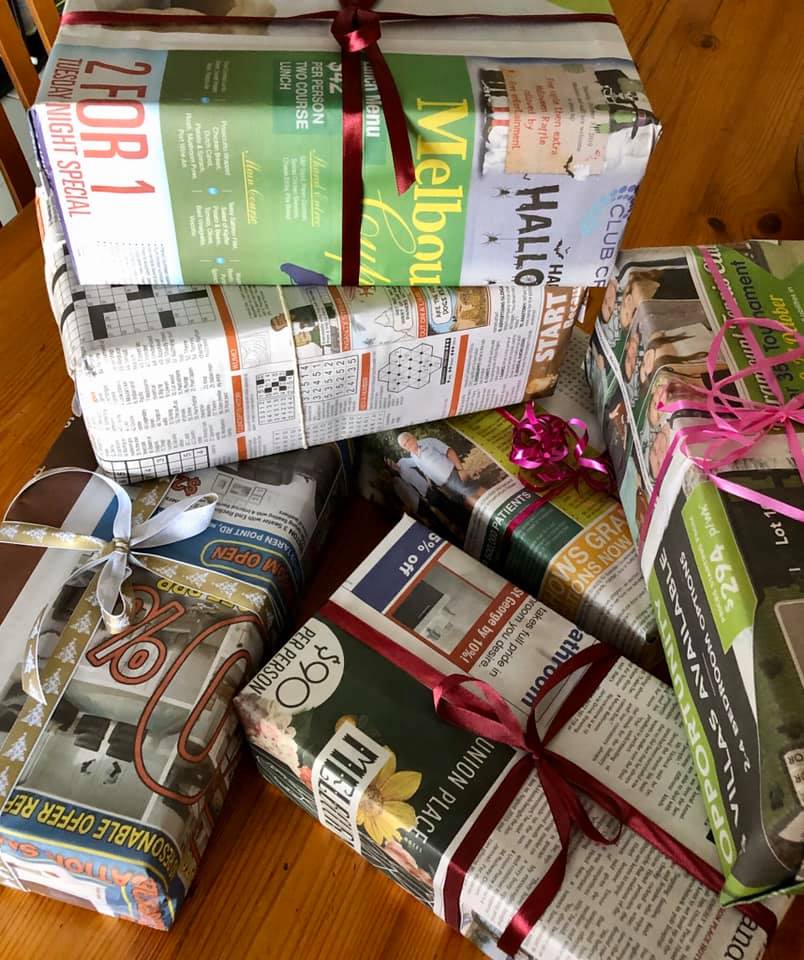 Wrapping parcels in newspaper cuts down on waste but also lets the recipient know where the parcel originated. Photo: Ladies of the Land Facebook.

Theresa has put a handmade sea glass pendant in each of the parcels she has made “so the women have a piece of the ocean with them” and, of course, her parcels will contain lots of her delicious lollies, fudge and chocolate!

Theresa will drive parcels from the Eurobodalla to Braidwood on 4 December and Helen will then take them on to Orange for distribution.

Ladies of the Land aims to collect 1000 parcels a week Australia-wide, every week until delivery on 10 December, but parcels will need to be dropped to The Mogo Lolly Shop or Braidwood Bendigo Bank before 4 December so they can be delivered on time.

What an incredibly thoughtful and kind thing to do...love it.

We are doing it Lismore too. It’s a wonderful thing to do..

ChrisinTurner - 3 minutes ago
A contribution of less than 1% towards the LR network won't go far. However this amount would be against the advice of Infras... View
jwinston - 8 hours ago
I wholeheartedly agree with your summation here Chewy14. This is a bit off subject but I’m very interested in the comment y... View
keek - 9 hours ago
I think you believe light rail to be a far bigger election issue than it actually is. I've found that outside of here, very f... View
News 24

Nick Anderson - 3 hours ago
Absolutely not, unless each and every arrival presents a valid vaccine certificate with their visa and spend two weeks in qua... View
Shehzad Sarwar Hossain - 4 hours ago
Great thinking and in the right direction. View
Geoffrey John Randal - 7 hours ago
Very positive thinking. We should be able to handle this, with the commitment of the universities carrying the weight of quar... View
News 5

bryansworld - 4 hours ago
However, this would create a signal for new suppliers to enter the market and undercut the original ones who are trying to go... View
keek - 5 hours ago
Great way to ensure the prices of these things all rise very sharply once suppliers know there is an easy 15 grand in it for... View
Food & Wine 2

Ol L - 6 hours ago
When COVID 19 blows over most will rush back overseas. Hope there’s no COVID 20 or they will all want to rush back here aga... View
Community 1

Capital Retro - 6 hours ago
Are public toilets included in the plan? View
Community 13

Ol L - 8 hours ago
Brindabella s? Would look like nothing recognisable as there hardly the Himalayas View
Food & Wine 1

TimboinOz - 21 hours ago
How to spend money, in public? AKA Konspikewus Konsumption. Look at ME!!!!! YAWWWWWWrrrrm. Build a veggie garden, grow your o... View
News 24

chewy14 - 22 hours ago
BJ, You aren't meant to bring these things up. The only information allowed is positive. It's efficient, it's modern, it's vi... View
chewy14 - 23 hours ago
JC We don't need news reports, transport Canberra publish the patronage reports. BJ's figures are accurate. https://www.trans... View
bj_ACT - 24 hours ago
Just for the record, the light rail business case for expected daily patronage was quite low in 2019 and we beat that in the... View
Property 6

Someonesmother - 23 hours ago
Gee why does this not surprise me? Look who the developers are. 43 car parks in a completely congested street, using Canberra... View
News 5

The ACT Government has welcomed a funding injection of $132.5 million from the Commonwealth for the next stage of the...
News 24

Chief Minister Andrew Barr has floated the idea of the ACT receiving one flight of international students for every repatriation...
Property 50

@The_RiotACT @The_RiotACT
The ACT Chief Health Officer has announced all COVID-19 travel restrictions placed on people from Victoria will be removed at midnight tonight https://t.co/wL1ccTOWym (42 minutes ago)

@The_RiotACT @The_RiotACT
If you're an emerging theatre maker, where do you go for experience? Three local creatives say the Canberra Youth Theatre artists' residency has been invaluable for them https://t.co/wBFdnL4Ls5 (3 hours ago)