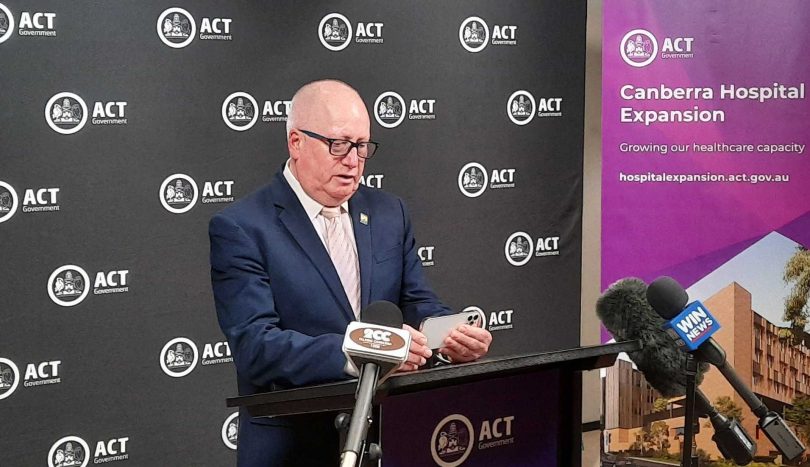 The Canberra Hospital Expansion project has been a long time coming, but last week’s intervention by Planning Minister Mick Gentleman was a curious affair.

A 2016 election promise, the project previously known as SPIRE, has had its fair share of delays and controversies, but with the DA finally in and contractor named, there had been no hint that a start would not be made as expected later this year for a 2024 finish.

Yet, Mr Gentleman seemingly took it upon himself to use his call-in powers to cut short the planning authority’s usual assessment process and wave the DA through.

But when pressed about why the sudden haste or how much time his intervention will save, the Minister could only say he wanted to ensure the project got underway in a timely manner.

It would only start “a little bit sooner” than if he had let the process run its course.

There was no suggestion that the DA would be refused, or lengthy negotiations would be required or that it could end up stranded in the ACT Administrative Appeals Tribunal, a situation that might justify the Minister’s call for such an important piece of public infrastructure.

The DA had generated only nine representations, a product of the extensive consultation already undertaken, according to Health Minister Rachel Stephen-Smith, and Mr Gentleman said those concerns had been addressed.

The Notice of Decision says the key issues raised were parking, the siting of the building, landscape design, the level of health services and amenity, and access and wayfinding, some of which were outside the planning authority’s remit.

Mr Gentleman rejected assertions that the intervention undermined the approvals process, saying he had used the power sparingly or once a year.

That is true, but in those instances – the Manuka Oval Media centre, Dickson shops development and the Common Ground social housing project in Dickson – at least he could argue some need, urgency or time restraint.

This decision looks gratuitous; a political stunt pulled to provide an ‘announceable’ to maintain the project’s momentum.

The only other reason could be to give the project a marginally greater chance of being completed by the next election in October 2024.

READ ALSO Electric vehicle registrations in the ACT surge past 1000

The government has been consistently attacked for its management of the Territory’s health services, especially Canberra Hospital, by the Opposition and a former Labor chief minister, Jon Stanhope.

Mr Stanhope argues that under Andrew Barr, Labor has been underspending in health and that the hospital expansion will not provide sufficient capacity to match the ACT’s growth.

Labor will be striving for a seventh continuous term in 2024 and will want to have a number of big infrastructure projects on track, underway or locked away to make sure of it.

Maybe Mr Gentleman thought a helping hand would be good for Canberra – and his grateful party.

The ACT Greens oppose the use of the call-in powers, arguing that the proper public consultation and assessment processes should never be bypassed.

But maybe this is how the ACT Government rolls these days – acting with impunity, without evidence or argument and frankly dismissive when someone questions such an unwarranted intervention.

Mr Gentleman may disagree, but that’s what arrogance does.

His actions do undermine the planning approvals system and tarnish the call-in powers that should only be used as a last resort when a development of significance faces lengthy delays or the community is deadlocked.

There is still a long way to go in 2022. Mr Gentleman may yet rue using up his ‘once a year’ dip on a such a sure thing.

Unless, of course, there’s something he isn’t telling us.

Yes, for a planned city that might have avoided the haphazard or devious development outcomes seen elsewhere, Canberra’s planning process has produced some shockers – that Magistrates Court monstrosity (I was talking only of the building, Your Honour) abutting Vernon Circle being one that has me shaking my head every time I drive past (a good case perhaps for successfully claiming to have been distracted from the 40 kph zone around the bend).

The only consolations are the Liberal Party cheer squad doesn’t get to whine about NIMBYs as often as it would like and that ‘development’ outcomes under a Liberal Party-dominated Assembly would be far worse.

This government has a long history of using the so-called call-in powers to circumvent proper planning scrutiny. This shouldn’t come as a surprise to anyone.

That is the ACT planning system. If they Govt (or developers) don’t get what they want through the gazetted process, Barr & Co use the call in powers to achieve what they want. Look at the Dickson development, despite their own planning process, reviews, court action, they just did what they wanted in the end.

This ACT labour/greens government has to go. They are riding roughshod over us. Taxes, taxes and hidden charges in our rego and rates etc. It just has to end.

Allan Wilcock You are correct in your summation of the ACT Greens government. Labor is now beholden to the Greens who are actually controlling the ACT. Rates increases plus the ones attached as levies which seem to pile up and even the small amounts add up. It is becoming difficult for low income earners and pensioners to survive the onslaught of government charges.Now they are going to spend $$$$ building another Rattenberry railroad to Woden, of course the hapless Canberran will be forced to pay for it even if one never travel on it. The disruption in the city will be horrendous and apparently the tram will take longer to the city than busses .Canberrans have been paying for the Gungahlin tram although most have never travelled on it.

“But maybe this is how the ACT Government rolls these days – acting with impunity, without evidence or argument and frankly dismissive when someone questions such an unwarranted intervention.” Too right.

No one who lives around the hospital should be shocked. You bought a house next to a hospital…

Government projects should not be subject to DA’s anyway.

Jp Romano yes they should, any project that could have potential issues should be subject to a DA.

Marc Edwards except it’s a waste of time. Because who approves the DA’s? The Government.

Jp Romano yet the public should still have the same right to consultation and commentary for any DA that may affect them.

This is the worst minister ever.

Way out of his depth. Bowing to commercial interests?

Not surprised. He is clueless on most issues. 🙄

There was no consultation process. The first residents heard was a meeting where Ms Stevens-Smith TOLD us the site was decided, the entrance from a suburban street opposite a school was not up for negotiation. And like to Women’s and Children’s Hospital, it’s likely to be obsolete in size by the time it’s built!