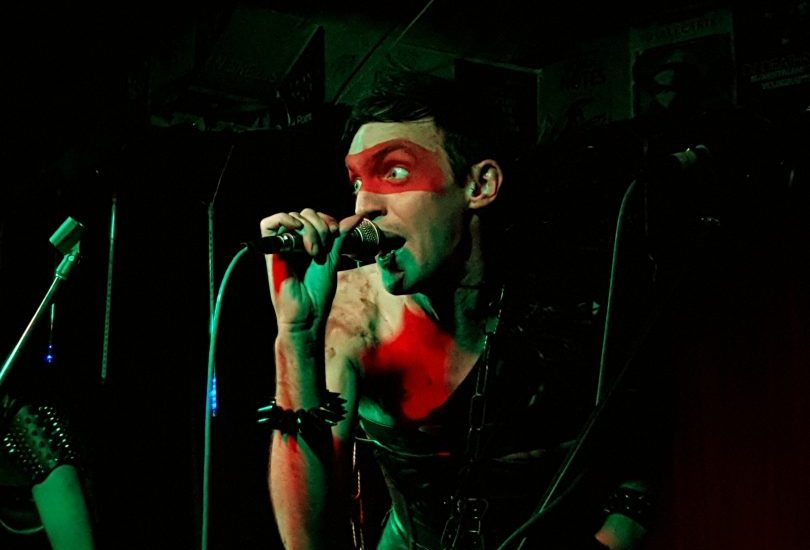 On a raucous, warm Saturday night in Canberra, on the two-year anniversary of the marriage equality vote, Melbourne post-punk princes Destrends took over Transit Bar for their ‘Medication’ tour.

Destrends’ theatrical, raw brand of post-punk is better in real life than in recordings – when you see them perform, you get the sense Destrends were destined to be on stage.

First, let’s talk the look. The boys were dressed like they were the protagonists of an art-gothic, post-apocalyptic film, which is not a look everyone can pull off without seeming pretentious or just a little bit silly. But the band utterly commits to their avant-garde look, while not taking themselves too seriously, and it absolutely works for them. 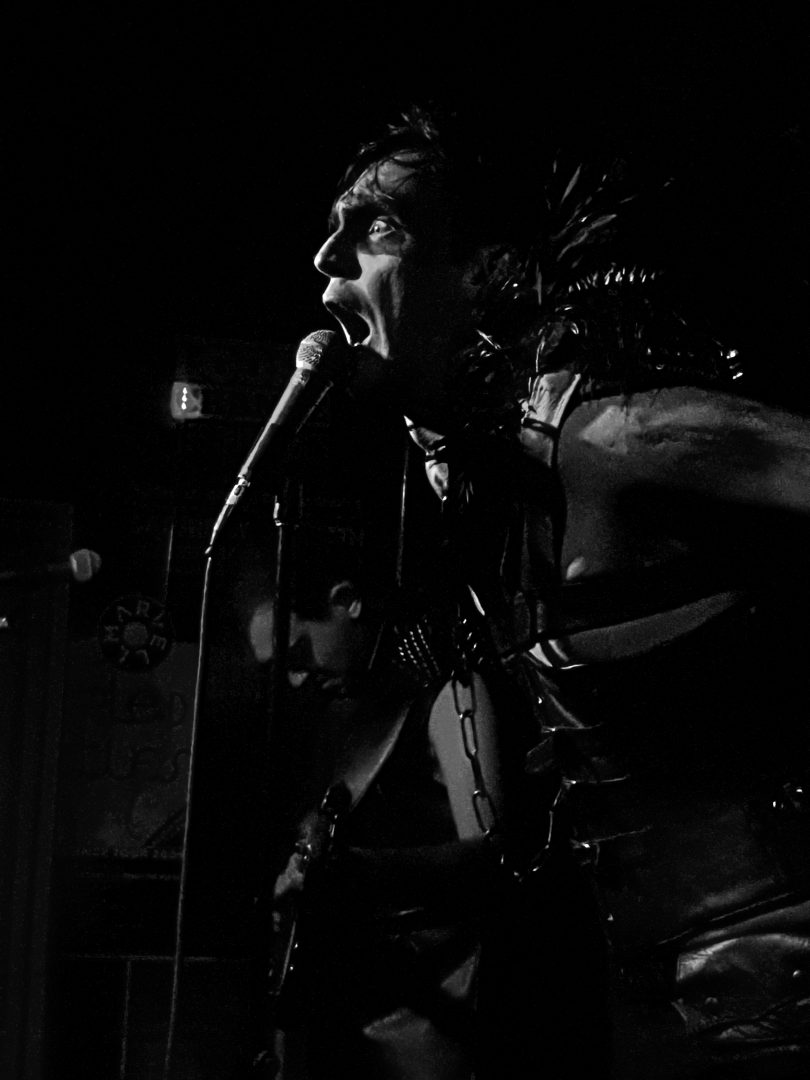 Frontman Matt Savage was completely compelling, and not just because he was wearing an asymmetrical corset (black and feathered, of course), or sporting a thick band of red paint across his eyes. Sure, his outfit was mesmerising, but also he was wild and then restrained and then wild again, prowling around the audience, knocking over his beer, and belting out tunes from ‘Missing People’ to ‘My Friend’, as well as their new single ‘Medication’.

The rest of the band – Nathan Savage on bass, Liam Burgan on drums and Billy Watts on guitar – were just as fun to watch. They all clearly love playing music together, especially Nathan, who would occasionally look at his brother singing his heart out and break out into a broad smile.

All in all, it was a pretty great Saturday night. Paint Store and Slagatha Christie are Canberra mainstays for a reason, and they reminded us of that fact with two fun, high energy support sets. In particular, Slagatha Christie got the crowd fired up with a spirited and sloppy rendition of My Chemical Romance’s ‘Welcome to the Black Parade’.

The audience was captivated from start to finish, a testament to how absolutely engaging Destrends was. There were singalongs, cowbells and dancing, with a highlight being an excellent, rollicking Talking Heads cover, complete with Savage inviting audience members to come on stage to line dance and sing along. 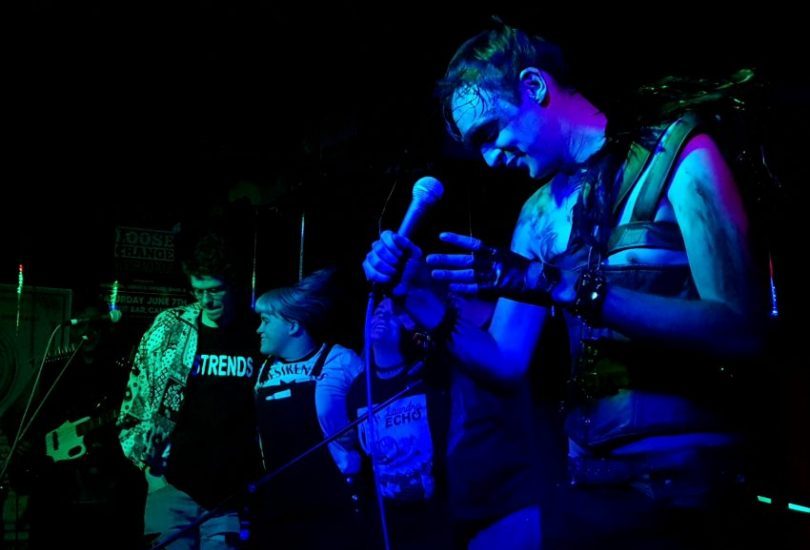 ‘Medication’ marks Destrends’ first single in several years, so hopefully some new music is on the horizon. The new single is a yell into the void about climate change, painting a bleak picture of a very real-seeming dystopian future resulting from said climate change. It’s about the apathy and greed of our political leaders, as well as corporations. It’s a fierce song, perfect for our times, and Destrends imbues the track with the urgency and fire the subject matter deserves. It will certainly be interesting to see what the post-punkers have lined up after making their dramatic return.

In the meantime, Destrends will be playing the last date of their ‘Medication’ tour at Stay Gold in Melbourne, on 23 November. You can listen to the new single on Bandcamp or Spotify.

Jamie Peterson - 1 hour ago
This article is the same as a puff piece for Andrew Barr 😂😂😂😂😂😂😂😂😂😂😂😂😂😂😂😂😂... View
Margaret Freemantle - 2 hours ago
So why have the light rail service frequency been wound back? No notice at all - just went to catch the tram at the weekend a... View
Jim Jim - 2 hours ago
The ‘Riot Act’ should rebadge itself the ‘Quiet Act’. Never a tough question asked of this government always patting... View
Motoring 10

Shay Daisy - 2 hours ago
I’ve been happily car-free for 3 years now. Belconnen suburb home, commute via bike to work (changed with covid). Shopping... View
chewy14 - 5 hours ago
If you added in the benefits in efficiency savings for owning your own car, the difference would be huge. For anyone that doe... View
Gibbo - 7 hours ago
Had no car and license before moving to Canberra. Within 18 months it became essential to have a car be able to get anywhere... View
Lifestyle 64

May Claydon - 2 hours ago
When will they be in Woden and Tuggeranong. They are not in Canberra. Only Nth Canberra... View
Tom Adam - 2 hours ago
Elroy, 😆 it is on the news. My remark is that a pair of non-Canberra businesses are getting so much free advertising from... View
Elroy Jones - 3 hours ago
Tom Adam no stake - its just got nothing to do with you or your small business. With respect, if your business was newsworthy... View
Opinion 14

HiddenDragon - 3 hours ago
The attractiveness, or at least acceptability, of online learning for international students will surely depend on whether th... View
Janet Mulgrue - 4 hours ago
I did my masters by correspondence before the days of online study. I found it great as I was also working full time. I was a... View
Anissa Jones - 5 hours ago
An article written by a non-teacher commenting on educational practices. What’s wrong with this? Hrmmm Could it be he has n... View
Community 2

RobS - 4 hours ago
After *seven* years of trying to try to bring pressure on the ACT Government (I was a member of the Wright Residents Group) t... View
Property 2

@The_RiotACT @The_RiotACT
The story of playwright, farmer & war hero Millicent Armstrong isn’t widely known, but actor Dianna Nixon will be bringing it to life at the Gunning Arts Festival this month https://t.co/uYoRhqQmOy (3 hours ago)

@The_RiotACT @The_RiotACT
Corrections officers are expected to clock more than 35,000 hours of overtime this financial year as they scramble to cover shifts at the Alexander Maconochie Centre https://t.co/tztW3SQLGo (6 hours ago)