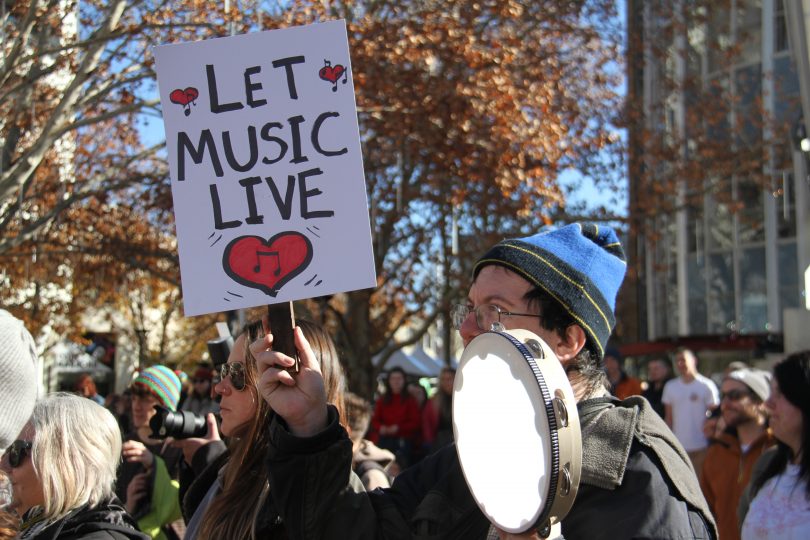 The ACT Government says it will extended daytime noise limits to “protect Canberra’s live music scene” but the Liberals and Greens are still calling on the government to create dedicated entertainment precincts across the city, labelling the government’s reforms as “baby steps”.

The Government has announced it will extend noise limits on Friday and Saturday nights from 10 pm to midnight in Civic and other town centres and 11 pm in group centres such as Dickson, Erindale and Kingston, to allow venues to make amplified noise longer into the evenings on weekends.

The Canberra Liberals, Greens and Music ACT have been campaigning to keep live music alive by lobbying for dedicated entertainment precincts across the city in an effort to halt live music’s “gradual death”.

“Canberra’s vibrant nightlife is increasingly under threat from out-of-date noise restrictions being applied across business districts and town centres,” Mr Parton said. “If this continues, we’re going to see the gradual death of live entertainment in Canberra.

“Canberra’s vibrant nightlife should not be held hostage by the ACT’s out-of-date noise rules.

“I think Mr Gentleman operates in one of two modes: either asleep at the wheel or damage control, and what we have seen today is damage control. This Government has sat on its hands for a decade.

“The Government’s reforms are far too little and far too late. We have been having this conversation for 10 years and nothing has been done.” 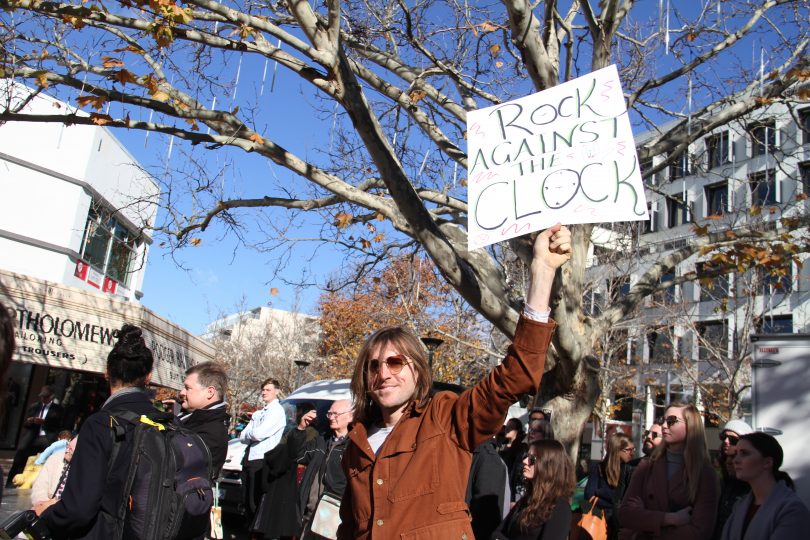 ACT Greens leader Shane Rattenbury said as the city’s density increases, there is an increasing conflict between residents and noise made at entertainment venues.

“These are some good baby steps but there is a whole lot more to do to protect the live music scene in the ACT,” he said. “The fundamental solution is to create entertainment precincts.

“Entertainment precincts help to protect the long-term future of the music and entertainment industry without exposing residents or businesses to unreasonable or unexpected levels of noise,” Mr Rattenbury said.

“Places like Brisbane’s Fortitude Valley have been future-proofed, letting music and nightlife live right alongside development.

“Without entertainment precincts, areas like Garema Place will continue to be quiet and underutilised – and worst of all, boring!”

“Our musicians, our residents and Canberra music-lovers and party-goers deserve better. Entertainment precincts have been years in the making – and with developments going up at a rate of knots around the city, now is the time to act,” Mr Rattenbury said.

“Today marks 3,475 days since the recommendations were delivered. Sadly there has been no government action since.”

Mr Gentleman said the ACT Government is continuing to work to identify suitable locations for special entertainment precincts in the ACT Planning review.

“The Government has listened to the concerns raised by advocates of Canberra’s live music scene, and we believe that these reforms will help live music and entertainment thrive in our city, town and group centres, boosting our night-time economy and supporting jobs in the Territory,” Mr Gentleman said.

“We thank the music and arts community for their feedback so far and will continue to engage with them about issues such as live performances and events as part of our ACT Planning review consultations.”

Don't the Liberals and the Greens have more MLAs between them than Labor?

If they're serious about this issue, they don't need to lobby. They need to work together and legislate.

Stuart Herring You make a very good point Stuart. It’s an extremely complex area in which to construct full legislation without the assistance of the directorate and the resources of government. Your approach is worth considering nevertheless

Road noise in my apartment is already well above the current limits for music venues so I doubt I could hear music over it. Any plans on reducing road noise for apartments near major roads Mr Rattenbury? Do the Greens have a policy about livability?

When the 2006 Planning and Development Bill was open for discussion, I was doing some work for the ACT Greens and some community groups. We urged then Planning Minister Simon Corbell to do something about prior occupancy rules. He refused.

So now we have reached the stage where the ALP finally has to do something, but far too little, far too late.

There are many instances where prior occupancy rules would have overcome unintended consequences such as this. What a shame that the arrogant and intransigent ALP refuses to listen to common sense.

It’s time this mob was booted and let someone else have a go.

Isn’t Shane Rattenbury a Minister in this Government?

Patrick J Pentony exactly, some statements by Green MLAs sound confused about whether they are part of the government or not

Not confusion - hyoocricy and lack of a spine....

David Jenkins - 42 minutes ago
Road rules aren't the same as licencing 🤷‍♂️. Make up your mind which you're going to have a whinge about. Given hor... View
Claudio Neumann - 5 hours ago
Jesse Pricsina I feel these vibes very strongly. also get off my lawn darn kids with their scooters View
Michael Ilsley - 6 hours ago
I love scooters, fabulous! View
News 12

Chris Prentice - 2 hours ago
Matthew Soall But it is a business. View
James Vetos - 3 hours ago
A committed centre of learning excellence... Nope, a one trick business struggling under a poor business model. Should be ash... View
Liam O'Toole - 4 hours ago
Emphasis on international students. ANU is discovering the results of putting all your eggs in one basket. View
News 68

Entertainment precincts need to strike a balance for venues and residents