Have you got your tickets for the Prime Minister’s XI? 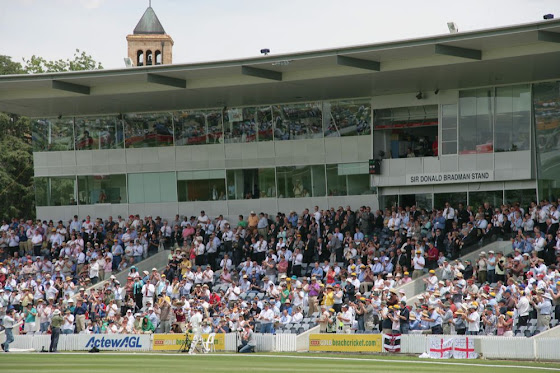 Tickets are selling fast for the highly anticipated fixture that will take place on Monday 10 January between the Australia’s traditional rivals, the English Cricket team and the Prime Ministers XI.

Leading the charge as Prime Minister’s XI captain will be Australian test batsman Tim Paine, with world-class paceman Brett Lee to head the bowling attack. Recently selected test batsman Usman Khawaja will add some class to the batting line up.

Local up-and-comer and ACT Comets representative Tom Thornton has also secured a spot on the side, alongside fellow Comets player Josh Anderson as 12th man.

The Prime Minister’s XI will have a tough battle against the English side who will be looking to reclaim the title after their loss to the side in 2006 and continue the winning form that saw them reclaim the Ashes in the test series.

Cricket ACT CEO Mark Vergano has urged everyone to get their tickets for the PM’s XI so they can be there to watch the fierce rivalry unfold, enjoy the atmosphere, the sunshine, the crowd and the banter—all the things that make our national game and the culture of cricket so great.

“Its not every year that we get such a high profile team like the English cricket side playing at Manuka Oval, so we are expecting the match to be a sell out, especially now a very strong PM’s side has been announced,” Mr Vergano said.

Tickets are available now from Ticketek at www.ticketek.com.au or at the gate on match day.

7 Responses to Have you got your tickets for the Prime Minister’s XI?
Filter
Showing only Website comments

bom predicts rain. english should be right at home…

I hope this lot put up more of a fight than your national team.

The Poms didn’t ‘re-claim’ the Ashes, they retained them

I can hardly contain myself.

I’ll be there. Our last chance to hammer the Pom.

JB et al, will the RA banner make an appearance?

See you all there!

Ann Chaplin - 3 hours ago
John Elliott spot on ! Very hard to get a differing viewpoint across these days so I salute you. View
Jason Ezra - 10 hours ago
Bilzo Healy yes. Science suggests that this is the most likely outcome for the future. But science can’t actually prove a h... View
Bilzo Healy - 11 hours ago
Not possible, proven by science. View
News 69

Trev Astle - 5 hours ago
Why not start a new light rail from Tuggernong to Woden. THen the middle bit can be filled in once the COALition is gone. View
Kytie Mclign - 16 hours ago
Never understood why it wasn't there to start with ... View
ACT Election 37

Eric TF Bat - 5 hours ago
Carnell should head off. View
Gay McGuire - 10 hours ago
Liberals need a new leader that the people of Canberra can believe in! The current is embarrassing & a joke. View
Frank Koch - 23 hours ago
Well said Kate View
News 1

Nate Jennings - 7 hours ago
It’s proven you don’t need them with the success of the greens this election. View
Robert Lang - 1 day ago
John Coleman I picked up a bunch of (Lib, Lab and Ind) corflute signs after the election (with permission) to use as tree gua... View
Opinion 12

chewy14 - 10 hours ago
"We need more people owning their own home and being in charge of their own destiny." Why? There are numerous issues that dri... View
Capital Retro - 10 hours ago
What a pity it is that this article wasn't posted a few weeks ago. View
ace2279 - 11 hours ago
This Govt LOVES the ridiculous price of houses in the ACT as it means more revenue for them at all levels. Anything about "af... View
ACT Election 24

Ben Appleton - 16 hours ago
If Coe really cared about the Canberra community and wanted to make Canberra the best place to live, work and raise a family,... View
Lifestyle 9

Neil Hobbs - 23 hours ago
If you like it, vote for it! www.contour556.com.au Peoples Choice prize - an original Jack Featherstone waiting for the lucky... View
Food & Wine 10

Brooklyn May - 1 day ago
Phil MacMillan you must be so stoked! 🍔 View
ACT Election 62

Peter Campbell - 1 day ago
What moderate would join the Libs these days? With so many homophobes, Trumpettes and climate science deniers, what reasonabl... View
show more show less
*Results are based on activity within last 7 days

19 October: 11.00 am  What just happened in the ACT election? It’s the morning after and Genevieve Jacobs is with Professor...
News 0

@The_RiotACT @The_RiotACT
Looking for a free-standing townhouse in a small development? Here’s a 1980s classic in Kambah https://t.co/CGBLw2cvMF (19 minutes ago)

@The_RiotACT @The_RiotACT
The Liberal Party has opened early preselection for the Senate in a move labelled as unfair and unprecedented https://t.co/Gp55kd9ZPz (1 hour ago)