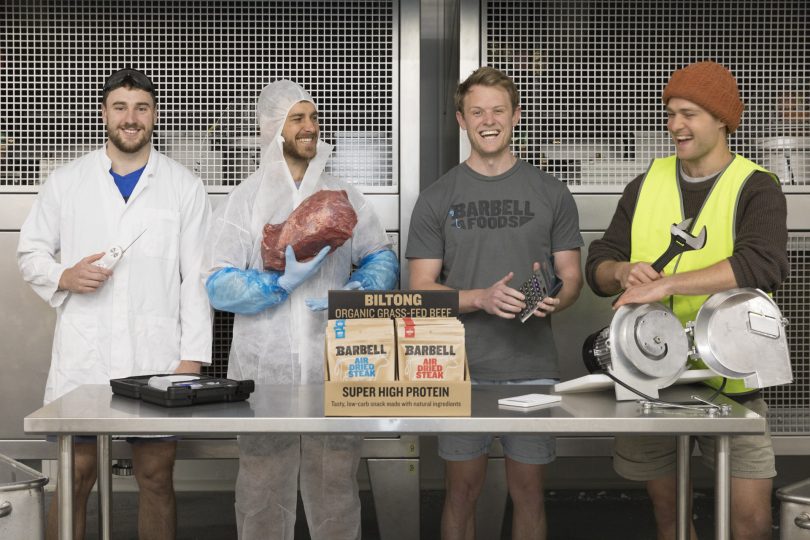 For a brief moment, the four mates in their 20s thought they had bitten off more than they could chew. But the quartet behind local food phenomenon Barbell biltong stepped up for one another and pushed on, aided by older brothers and business advisers.

Brothers Luke and Rory Rathbone, and their friends Tom Hutchison and Matt Laing met in a rundown Red Hill share house a few years ago, started the business out of a garage and hawked their dried beef snack product around local markets.

They have since borrowed $1 million, opened a manufacturing plant in Hume, and last week swung into expanded production of Barbell Foods biltong as part of ambitious plans to take the snack food market by storm.

The story begins back in South Africa from where the Rathbone boys emigrated with their family, bringing with them memories of biltong, a much-loved delicacy in the Republic.

Biltong is made from large beef steaks marinated in vinegar, spiced and hung to air dry for 10 days in a controlled environment at ambient temperatures.

Rory, a personal trainer, had noticed his clients were time-poor and wanted a healthy, nutritious diet. After googling the recipe, he began making his own biltong, which he took on camping trips with university students Luke, Tom and Matt, also in personal training.

They grew out of the home business to rent a little commercial kitchen at Lyneham. Rory’s lightbulb moment came while sweating through a weights session, handing the business its brand name, Barbell Foods.

But a year into the venture, they faced a dilemma common to small business: how to grow their idea to meet its potential?

“We hardly had a dollar to our name,” Luke recalls. “It took us a while to grow the idea of the business and actually believe it could be bigger than it was.”

That’s where the Rathbone boys’ big brothers Dayne and Clyde (a former Brumbies and Wallabies rugby union back) came in. Having their own tech start-up, Dayne and Clyde suggested a capital raising, attracting, among other backers, health food investors, who are also guiding the project.

“We are young guys in an industry where we had no prior experience. We were not afraid of asking for help when we knew we needed it,” Luke says. 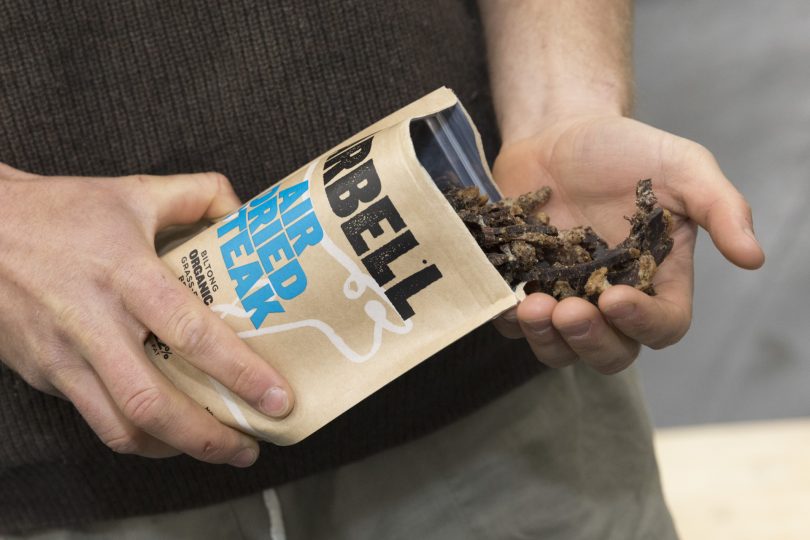 Barbell Foods aims to be the leading producer of meat snacks in Australia.

Not satisfied to merely copy the South African product, the boys have developed their own Australian recipe from organic, grass-fed beef from Queensland’s channel country, and aim to create the leading meat snacks company in Australia and begin exporting in three years.

Key to that is the Hume facility, where they moved to three months ago but had to wait for their purpose-built drying room to arrive from South Africa so they could scale-up production.

The four partners now employ seven casual staff, and when they hit capacity, they hope to run their machines around the clock.

The air-dried, portable steak is ready to go. It is chewier than beef jerky, which often is 20 per cent sugar.

“Our product has no sugar, a healthy amount of quality fat and is high in protein,” Luke says. “The early days were a lot of trial and error to get a flavour and recipe we liked. Since transitioning into a business we want to export, we have done a lot more research around food safety, preservation, drying methods, digging deep into the science of it.”

These days, Matt, who has a sports science degree with a major in nutrition, is focused on developing the product. “Rory is the quintessential wild-child with a lot of ideas and does our marketing,” says Luke, who is the oldest of the four at 28.

They use minimal marketing, invite people at farmers markets to try their biltong and are building an Instagram following, which stands at 3000. “We have been creative. A big part of this business is to have fun, to enjoy it; the marketing is one way to express that,” Luke says.

Their grass-fed beef provider, OBE Organic Beef, won them over with its animal husbandry practices, transparency and approach to agriculture.

“The cattle are on such huge properties in Queensland channel country, a lot of the farmers won’t see their livestock for many months at a time,” Luke says. “They are completely free-range, feeding on natural grasses and herbs. They are rounded up from helicopters.”

Most of Barbell Foods’ customers are Canberrans but they have distributors in Queensland, NSW and Victoria, and are in some NSW supermarkets, including Harris Farm Markets.

“I believe we can replicate our success elsewhere in the country and eventually be an export company,” Luke says. “I think we can be the biggest organic meat snacks company in Australia. Business is the most rewarding and most challenging thing I have done.”

Scott Southwell the biltong we are currently eating 👍

Javier Cross is this you? Surely you’re one of the Biltong Boys

Kevin where were these guys when you were a local!

Thanks Maree, I love their biltong! It’s the best 😁

It’s fantastic to see these guys doing well. Their product is awesome and never lasts very long in my house!

What a great achievement, so good to see a local company nailing it

Jeremiah Beatty did u hear about this?

whatwik - 18 minutes ago
"And when these materials do arrive, they have been going missing from job sites, builders told Region Media" When our renova... View
News 10

Daniel O'Connell - 42 minutes ago
Greater costs for electricity to follow, just like the rises currently being arranged due to 100 percent renewables. View
Capital Retro - 4 hours ago
Bill Gates is the world's richest virtue signaler: https://www.cnbc.com/2021/02/14/bill-gates-on-his-carbon-footprint.html Li... View
HiddenDragon - 16 hours ago
Some cautionary words here about the limits of battery technology - https://www.abc.net.au/news/2021-02-16/bill-gates-zero-em... View
Property 1