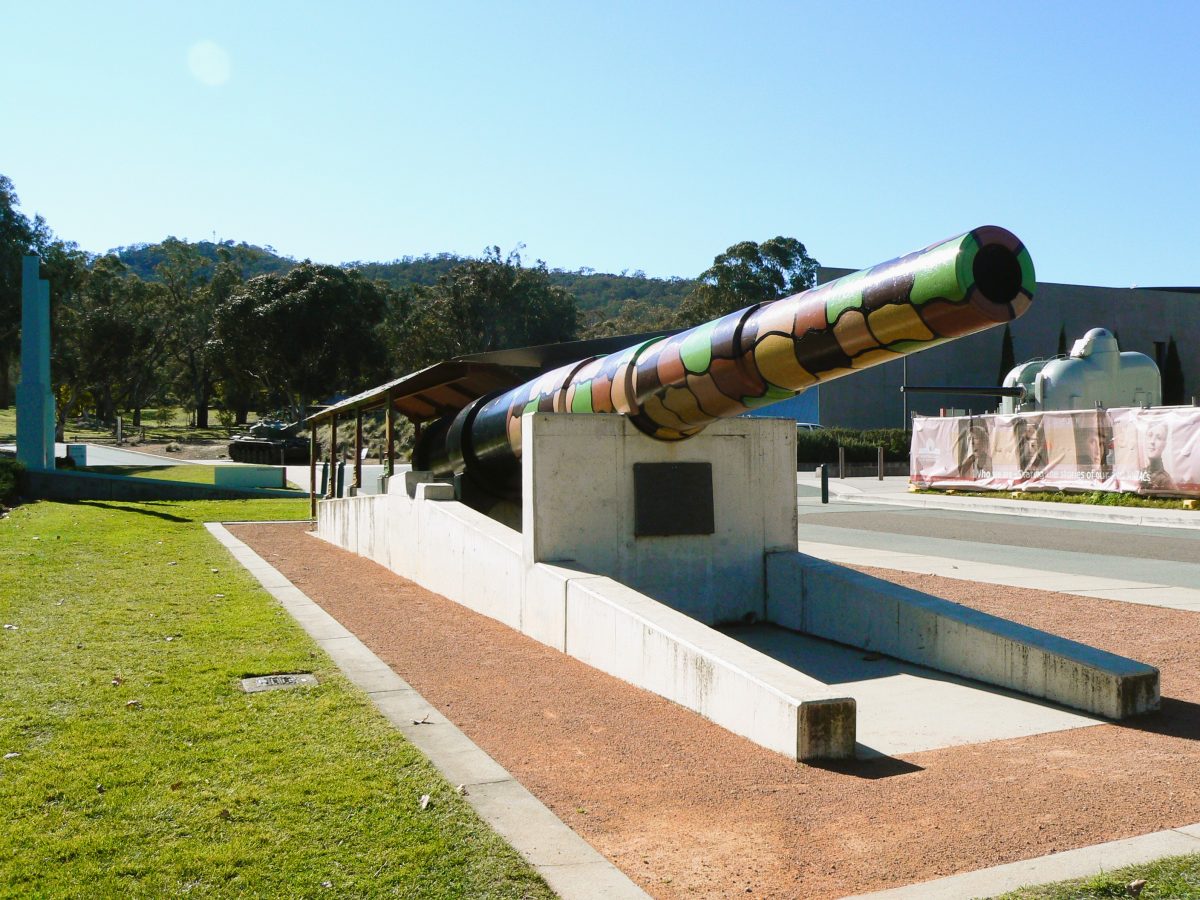 For decades, it was a landmark of Canberra. A tourist attraction even. It appeared on maps. Visitors came to see it. Children clambered over it, even if they weren’t strictly allowed to. Photos were taken. Memories were made.

“There would still be plenty of locals with family photos of their parents or grandparents next to what came to be known simply as ‘the big gun’,” Canberra historian Mark Butz says.

The Amiens gun has been called the “finest trophy captured by any nation during the Great War”. All that’s left of it now is the barrel – as long as a cricket pitch and weighing 41 tonnes – on the lawns outside the Australian War Memorial. But for more than 20 years, all 180 tonnes of it sat out in the elements on a purpose-built railway siding in Kingston.

Mark describes it as an “astonishing piece of hardware”.

“It could fire shells of 300 kg each a distance of 25 kilometres, so from where the barrel sits today, you could make a pretty big impact in Tidbinbilla or just short of Lake George. It was a very potent weapon.”

The gun started life on a German battleship before being mounted onto a custom-designed railway carriage so it could run up and down the battlefront as required. A canopy behind the gun housed the huge crew as well as the ammunition.

“It was so big and heavy, towing it around with horses was out of the question”. 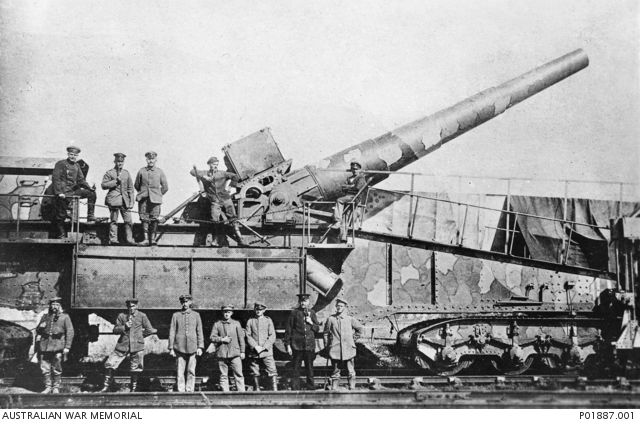 The Amiens’ big gun’ and some of its German crew. Photo: Australian War Memorial.

As for how it came to be on the other side of the world, in a fledgling capital city, that story starts in 1918, during the last days of World War I.

“The Germans used it to pound the Australian and other Allied troops in the city of Amiens, about 25 kilometres away,” Mark explains.

The Allies tried time and again to destroy the gun, but only on 8 August did a British biplane fighter finally stop the train in its tracks with a bomb. The Germans fled the wreckage, and the gun was claimed by the advancing Australian troops, who painted their mark on it.

Corporal John Palmer of the Royal Australian Air Force (RAAF) noted the occasion in his diary.

“We had been sent with a quantity of Amanol to blow up the large gun … however, Les Strahan, one of our sappers … found there was still a head of steam … Instead of blowing the gun up, he got the engine going, we were told then to try to get it back if possible into a cutting so it could be camouflaged,” he wrote.

From here, Mark says it ended up in the hands of the British, who painted over the initial Australian claim to make it seem their troops had seized it. 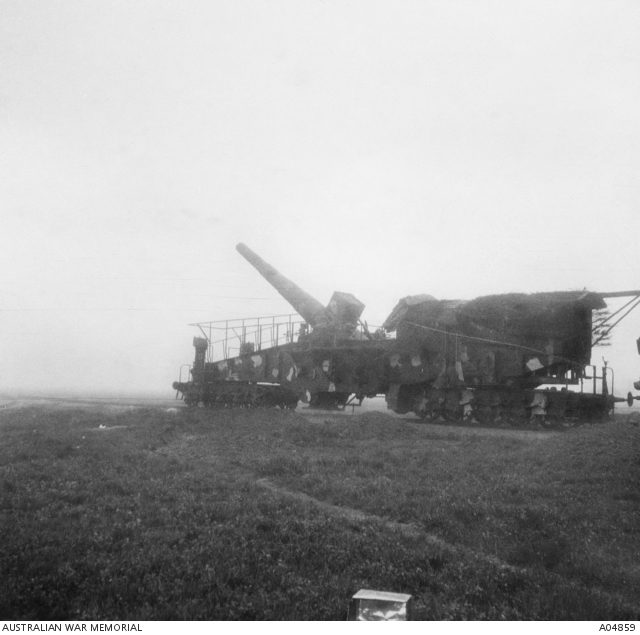 The Amiens gun, shortly after it was captured by Australian troops. Photo: Australian War Memorial.

“At the end of the war, when the Allies were sorting out who was going to take home what trophies, Britain conceded it was actually Australia’s win.”

It was later exhibited in Paris before being sent to England for transport to Australia.

“All the states in Australia fought over who would get it, but the reality is, only NSW had the suitable railway gauge for it. So it ended up in Sydney, where it was floodlit at Central Station.”

READ ALSO A shower, a stove and a six-tonne bell: we peek inside the National Carillon

But not only did it get in the way of upgrades to the station, but it was also so heavy it was beginning to sink the tracks. A few hours down the line, and on the same gauge, Canberra agreed to take it, housing it permanently in the up-and-coming Australian War Museum (the prequel to the Australian War Memorial).

“But then it took a while because it couldn’t quite work out how to get it to the museum.”

At first, it sat in an empty railway siding built for the Molonglo Internment Camp a few years earlier (where Fyshwick lies today). But it got in the way again, and so was moved again, this time to another siding by the Kingston Powerhouse. Its final resting place was at the Kingston Railway Station in May 1927, coinciding with the opening of Parliament House by the Duke and Duchess of York. 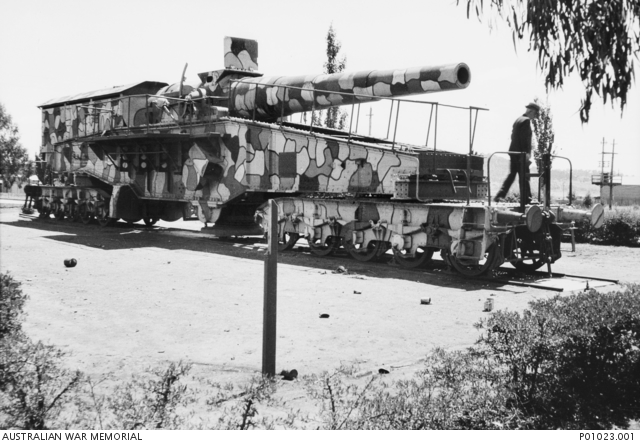 “They embedded a stretch of the rails in concrete, instead of ballast, so it wouldn’t sink as it had in Sydney.”

It sat there for 16 years, right next to Wentworth Avenue, and there was no missing it.

“Take away all the trees and buildings there today and you would have seen it for miles because of the sheer size of it.”

This was also about the same time several dairy farms were established in the area, the first of which took the name of ‘Big Gun Dairy’.

“The government wanted to test heavy guns and ammunition, so they essentially broke the thing up,” Mark says.

The mounting ended up in Adelaide and the bogey wheels in Victoria. It was always intended the bits would be reunited after World War II, but it never eventuated. In the end, everything except the barrel was melted down for scrap.

“The fact that such an important trophy ended up busted up is very sad,” Mark says.

“I don’t think any other Allied country would have let this ignominious fate happen.”

Today, the barrel is on display outdoors at the Australian War Memorial, while keen observers will still note a raised concrete section of track at the Kingston Railway Station. Everything else is resigned to old photo albums.

Made by Krupp in Essen
Germany

I should add that the plinth next to Wentworth Avenue was where Locomotive 1210 was displayed, not the Big Gun. Old maps show the BIg Gun in the middle of Wentworth Avenue. Loco 1210 was the first train into Canberra and carried only goods. The date was 25 May 1914. After it was retired from NSW raiways in 1958 it was presented to Canberra in 1962 and displayed on the plinth until it was relocated to the Canberra Railway Museum in 1984.

Great story Mark Butz! The War Memorial did not open until 1941 so the train had to be kept elsewhere. From 1923 to 1927 it was parked at the Molonglo Siding, next to the Internment Camp. Then it was moved to the middle of Wentworth Avenue, near the Railway Station until it was broken up during WW2. The nearest dairy farm, Cargill’s, was known as the Big Gun Dairy. This is an important piece of Canbera’s railway history and the railway precinct at Kingston.

“Corporal John Palmer of the Royal Australian Air Force (RAAF) noted the occasion in his diary.”

Just an historical note on terminology The “RAAF” (as such) was not formed until 31 March 1921. Its predecessor in World War 1 was “The Australian Flying Corps”.

Pretty disgraceful it was broken up. Would have been an awesome sight when it was complete 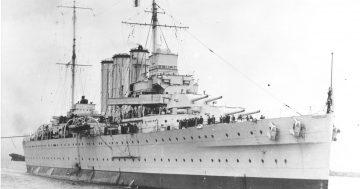 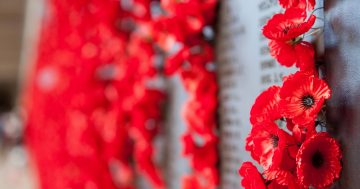